Play Your Kicks - The Legacy of Route 66 Inspired Games

The winding roads, scenic vistas, and rich history of the Mother Road has inspired many individuals to create works that pay homage to her legacy. From John Steinbeck’s breathtaking novel, The Grapes of Wrath, to the 1960’s TV show, Route 66, the inspiration people have drawn from the iconic road has resulted in love letters as distinct and revered as the historic highway itself. In addition to this compelling tapestry of artistic endeavors, game designers have also been smitten by America’s Main Street, producing fun, Route 66-themed creations such as card games, board games, and even video games. While some of these Route 66 based games simply reproduce the classic visage of the Mother Road, others offer a deeper illustration of its timeless brilliance.

Route 66 The Board Game 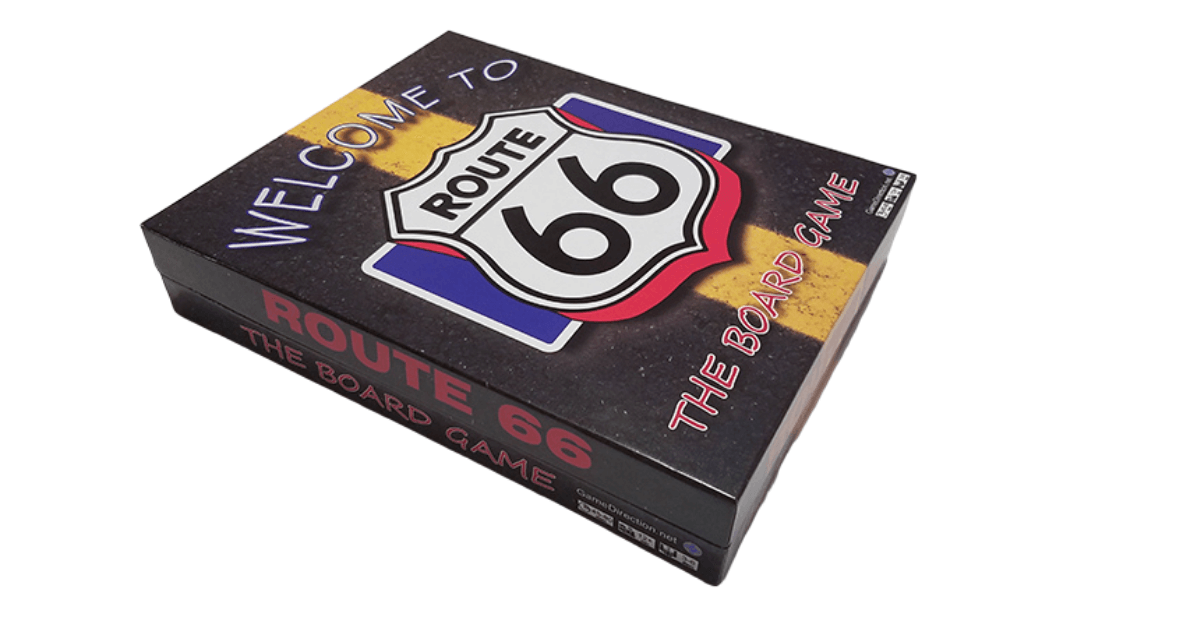 Published by GameDirection in April of 2019, this board game is a multiplayer game that takes each participant on a journey down the Mother Road from Chicago to Los Angeles. The goal is to earn “Experience points”, that players obtain through the food they try and the places they visit while playing. The game utilizes little plastic cars to indicate each player along a “board” made from cards that list out the different locations they will visit on their simulated Route 66 road trip. These stops fall under specific categories such as gas station, hotel, and restaurant—all while incorporating various landmarks like the Route 66 Last Stop Shop in Santa Monica, California.

Real-life road trip experiences were not spared in this game: Gameplay includes the use of “Weather” cards, which determine how favorable the conditions are on a player’s journey; whether it be sunny or stormy, this clever addition introduces an element of chance to the game. After each player finishes their road trip, the game is over and individual Experience points are counted up. The winner is the player with the most points, which in other words means that the one who experiences the most of what Route 66 has to offer wins. Whether intentional or not, this interpretation of “winning” conveys a subtle yet meaningful lesson about the value of a road trip filled with moments of connection and bonding. Within this lesson, Route 66 implicitly demonstrates how the Mother Road’s inspiration can generate a sense of poetry around something as simple as a card game. 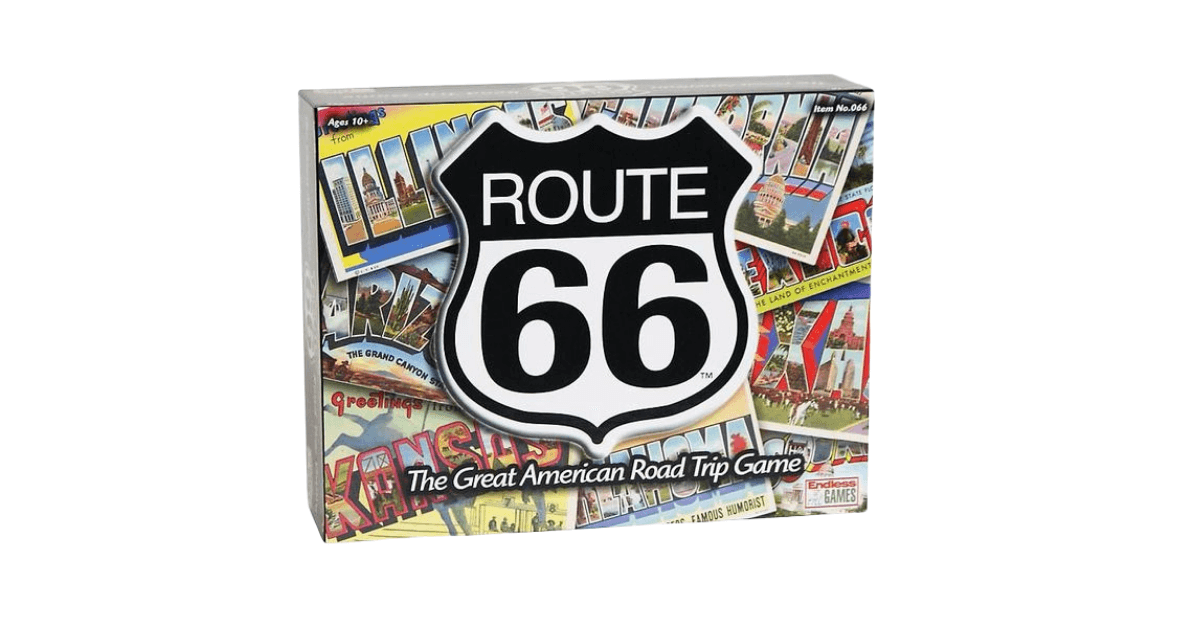 Released by Endless Games in 2002, this engaging board game also takes participants along the scenic highway, but has a different start location, New York. Players begin in the Big Apple then move down I-80 to Chicago where they hop on Route 66 and take it all the way to Los Angeles. As players travel west over the multicolored map via a road with cartoonish bends, they land on various “challenge spots,” which involve solving true/false questions, drawing pictures, and answering trivia. This interactive piece intertwines classic elements of various games and unties them under a Mother Road themed package. 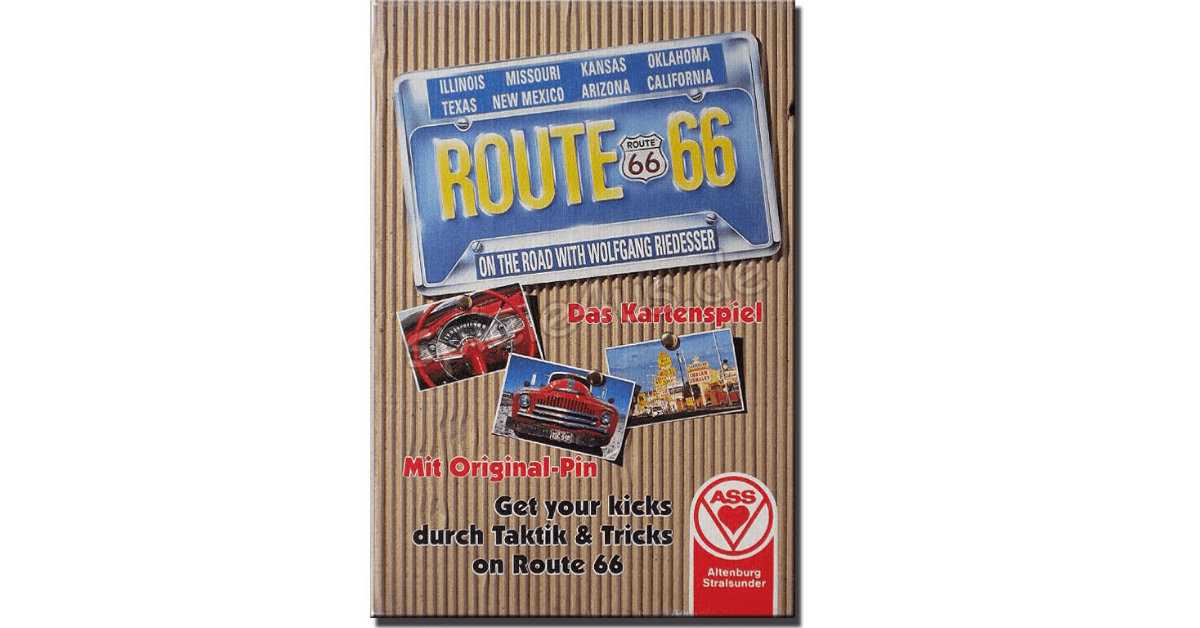 This card game originated for the purpose of entertaining audiences overseas with popular American imagery. Created by designer Wolfgang Riedesser in 1993, this German-language game was produced by the mouthful of a playing card company, ASS Altenburger Spielkarten. In the same vein as the GameDirection card game, Route 66 Das Kartenspiel takes you on a Route 66 road trip from Chicago to Los Angeles, but this time the goal centers on players earning the most money. Each participant starts out with $600 and must raise their personal fund by drawing playing cards that result in profits or hinder competitors by making them shell out additional fees for things like disobeying the speed limit. This card game isn’t so much about the road trip experience, but rather about speeding through the game and racking up cash.

This is the Das Kartenspiel’s board game equivalent—made by the same designer and publisher— but honoring the slow and scenic side of road tripping on historic Route 66. In this board game, also dubbed Route 66, players similarly race to sunny LA from the Windy City of Chicago, but also have to embark on a return trip. The objective here is to take things in stride—slow and steady wins the race is the underlying mantra. Participants have an incentive to see as many sights as possible in order to gain state cards, which determine the player who wins the game. The Route 66 board and card game duo illuminates the far-reaching international impact that Route 66 has on countries like Germany. This borderless appeal may come as no surprise for those familiar with the international diversity of Route 66ers, many of whom are German tourists eager to soak in America’s Main Street and its historic landmarks. 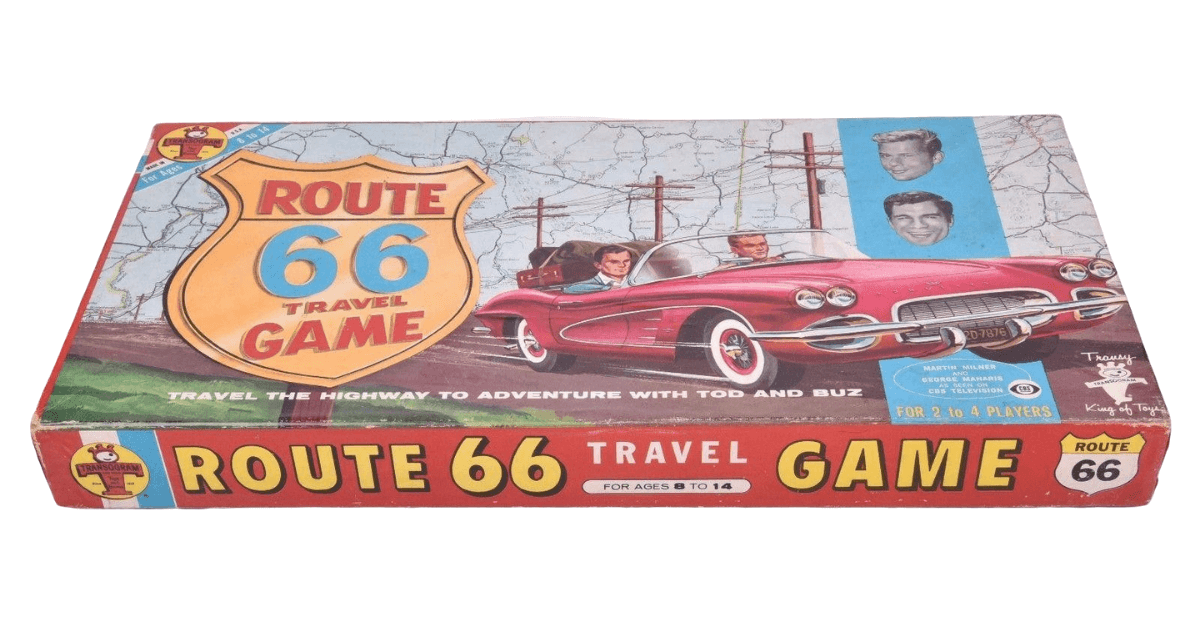 One of the earliest Route 66 inspired board games is the 1962 game by Transogram based on the famous TV show of the same name. While the iconic televised version of Route 66 was airing on screens across America, publisher Transogram created a board game that presented players with the objective of completing a Route 66 road trip before fellow participants. Route 66 featured famous towns along the Mother Road and served as one of the earliest game-based love letters to the old route. 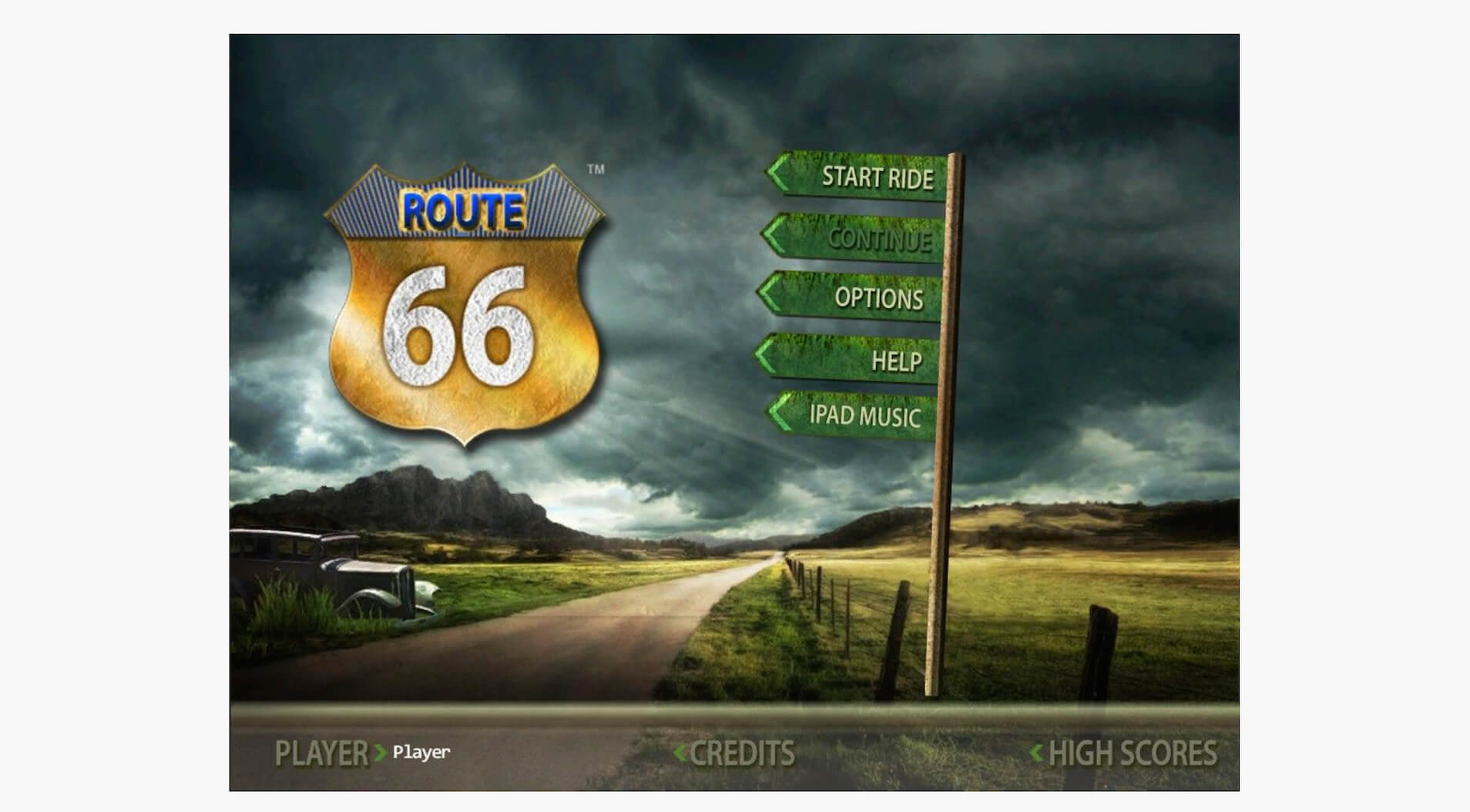 This puzzle solving adventure game, released back in 2009 was developed by GameShastra Solutions and published by Big Fish Games. Here Route 66 follows the road trip of Madeline “Mad” Mayflower as she decides to take a break from motorcycle racing to cruise down the historic highway and take in the sights. Madeline starts her journey in California and heads east to Chicago while encountering minigames, hidden objects, and notable locations along the way like the Museum Club, Cadillac Ranch, and the Blue Whale of Catoosa.

The famed Japanese video game developer SEGA published this Route 66 inspired arcade machine in 2001. Developed by Sega-AM2, this truck driving arcade machine included your typical standing game cabinet as well as a deluxe cabinet that was shaped to mimic the facade of a semi-truck, decked out with a bright yellow paint job and complete with a seat and steering wheel to drive down the virtual road. But unlike those more relaxing, slower paced board games, King of Route 66 features a much more aggressive, adrenaline flued energy. The player spends most of time careening and crashing into other cars while racing along the historic highway at high speeds. While this Redbull of an arcade game might not be for everyone, SEGA brought it to a larger audience by enlisting the help of Japanese video game company Tose who developed King of Route 66 into a game for the PlayStation 2—a video game console produced by Sony. Though not the most popular game, the fact that the reach of Route 66 stretched all the way across the Pacific speaks to the world-renowned nature of the route.

Amongst the many Route 66 games that graced department store shelves and sit on the carpeted floors of black-lit arcades, there are some that simply don’t make the cut. This solemn club of games includes the canceled PC game, Route 66, which was being developed by Disney Software/Buena Vista in the early 1990’s. The game fell into the adventure/survival genre where players assumed the role of Dart Stranger, a young man who is strapped for cash and has just found out that his close relative has passed away—presumably leaving him some money in the will. Supposedly, the game’s main objective centered on racing Dart to the reading of the will in California via hitchhiking along Route 66 while avoiding all sorts of mishaps such as being arrested or winding up in a hospital bed. While this game never came to fruition, its mere existence paints an intriguing “what-if” scenario and, perhaps more importantly, alludes to how influential Route 66 has been for games as a whole.

This abbreviated list of card, board, and video games only skims the surface of Route 66 inspired entertainment. Pixar’s Cars franchise, which was inspired by Route 66, has also created its fair share of video games, while other computer games like Delicious: Emily’s Road Trip, (developed by Stage Clear Studios and published by GameHouse, Inc.) features a family traveling down the old road as they serve food and drinks to hungry roadies and Route 66ers. As the historic highway continues to imprint its iconic spirit onto our music, novels, TV shows, movies, artwork, and much more, so too will it continue to inspire all kinds of games that strive to animate the warm, nostalgic feeling of journeying along the Mother Road.