Meet Me at the Monte V

With a history almost as colorful and interesting as the actual interior of the vintage venue, Flagstaff’s Monte Vista has a fascinating story to tell. 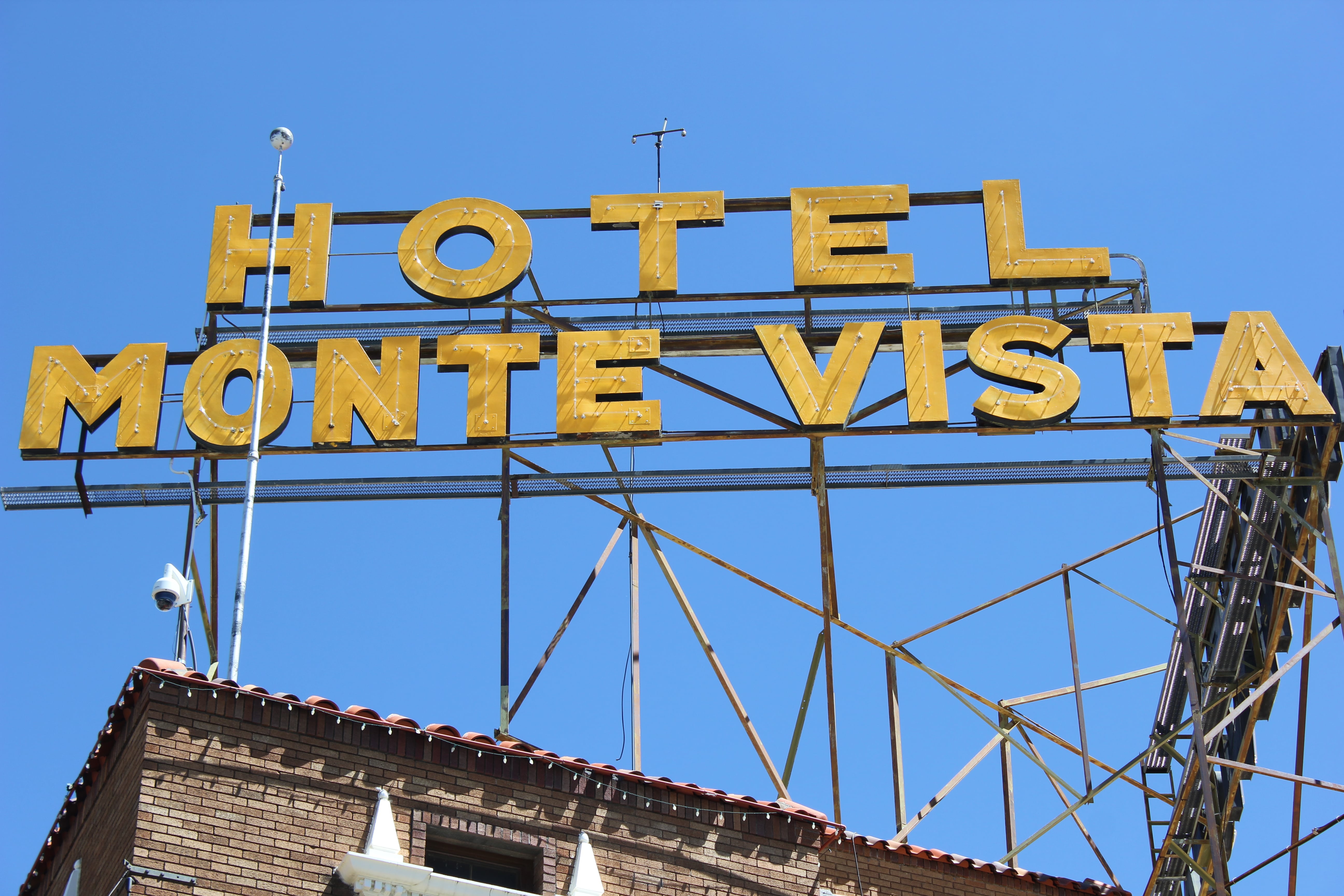 Located at Route 66’s mid-way point in Arizona lies one of the state’s oldest fully operational hotels – the Hotel Monte Vista. One of Flagstaff’s most valued treasures, the hotel opened on New Year’s Day, 1927, a mere seven weeks after Route 66 opened on November 11, 1926. Rustic charisma and historic gravitas are enough to lure guests to the Hotel Monte Vista, but its iconic sign, famous guests, and quaint cottage-like bedrooms romanticize the hotel experience.

Most rooms contain a private bathroom, but the hotel offers a few hostel-like options appropriately called “Traveler Rooms.” Located on the second floor above the hotel’s two bars and lobby, these four bedrooms are bundled together to share two bathrooms and three showers. If this isn’t your cup of tea, however, there are plenty of private rooms with queen or king sized beds and a shower of their own.

Ground was broken on the Monte Vista on June 8, 1926, thanks to the fundraising effort of the Flagstaff community. The city raised $200,000 in one month and moved forward with their efforts to provide more accommodations in order to adapt to the rise in tourism (which was about to increase even more thanks to Route 66).

Originally called the Community Hotel to honor the tax paying citizens who paid for the construction, the hotel offered a contest in which one winner would choose a new name for the hotel. A 12-year-old school girl won the contest and bestowed upon the hotel its new name, Monte Vista, meaning “mountain view.” 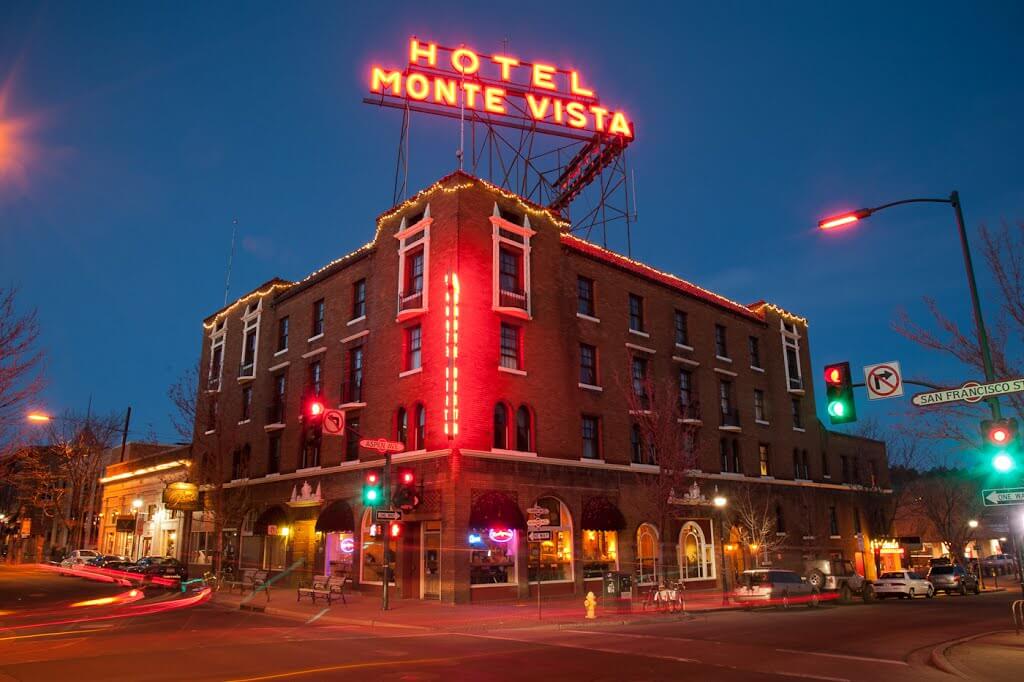 The Monte Vista quickly became a gem in Northern Arizona, where locals birthed the phrase “Meet me at the Monte V.” Famous figures, such as Bob Hope, Clark Gable, Debbie Reynolds, Bing Crosby, Michael J. Fox, Jon Bon Jovi, and Harry Truman frequented the hotel. President Harry Truman loved everything about Monte Vista, including barber Samuel Canainas who worked out of the hotel. The President once flew Mr. Canainas to Phoenix for a quick haircut.

When Mary Costigan was granted a commercial radio broadcasting license in 1927 – as only the second woman in the world and first in the U.S. to reach this accomplishment – she quickly realized she needed a larger space and more resources to broadcast her increasingly popular show. She moved KFXY to the Monte Vista in 1929, where more than 400 locals attended her first ever 100-watt show, which went on to broadcast three hours a day.

Although the hotel is renowned as a charming relic of history, the Monte Vista is perhaps more infamously known as one of the most haunted hotels in America.

The Bank Robber is a seemingly friendly ghost who makes his dwelling in the hotel lounge. Shot by a bank guard during a 1970 heist, this alleged robber and his two co-conspirators stopped at the Monte Vista lounge for a drink, where he bled to death. Since then, guests and staff have reported hearing a welcoming “good morning” from an unknown source. Reports of barstools and drinks moving on their own might also be attributed to the Bank Robber now eternally lingering in the hotel lounge. 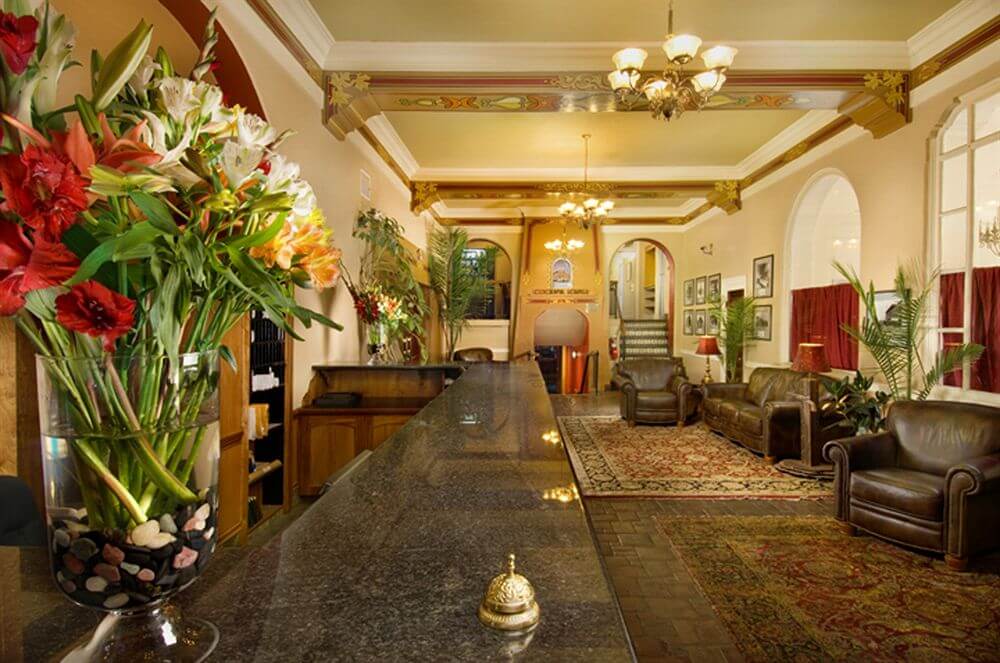 The Phantom Bellboy can be heard lurking the halls at night, standing outside room 210 and knocking on doors to offer room service. John Wayne, who stayed at the Monte Vista several times while filming movies in Flagstaff, reportedly experienced the ghost a few times during his visits. The hotel’s website claims Mr. Wayne did not feel threatened by the ghost, a relief to potential future inhabitants of room 210.

Room 306 tells a different story. Home of the Woman of the Night, male guests frequently report waking up unable to breathe, as if being suffocated. Why only the male guests? In the 1940s, two prostitutes were murdered in room 306 and thrown over the balcony. Their ghosts are said to inhabit room 306, angry and seeking revenge against the opposite sex. Female guests should not feel left out, however. You can expect to wake up to the feeling of being watched.

The most active phenomenon in the hotel, however, resides just next door in room 305. According to Monte Vista’s website, many guests and several housekeepers have reported seeing the room’s rocking chair move by itself, heard knocking coming from inside the closet, and occasionally catching a glimpse of a woman sitting in the rocking chair. An elderly woman who was once a long-time tenant of room 305 would spend hours in the rocking chair by the window, waiting and watching. She is still waiting and watching long after her death – for what, we will never know.

Whether you believe in ghosts or not, Hotel Monte Vista is worth the drive to Flagstaff. The neon sign atop this national treasure beckons those passing by to stop and see the Monte V, where guests come for the name recognition but they stay for the charm.