The Largest Antique Ever Sold

“The London Bridge is a testament to the indomitable American spirit of innovation,” Terence Concannon, President/CEO of Go Lake Havasu said of Lake Havasu City’s oldest antique. “We are proud to have this iconic landmark in our city. The London Bridge not only honors the American spirit of innovation and creativity, but also the historic relationship between the United States and Great Britain.” 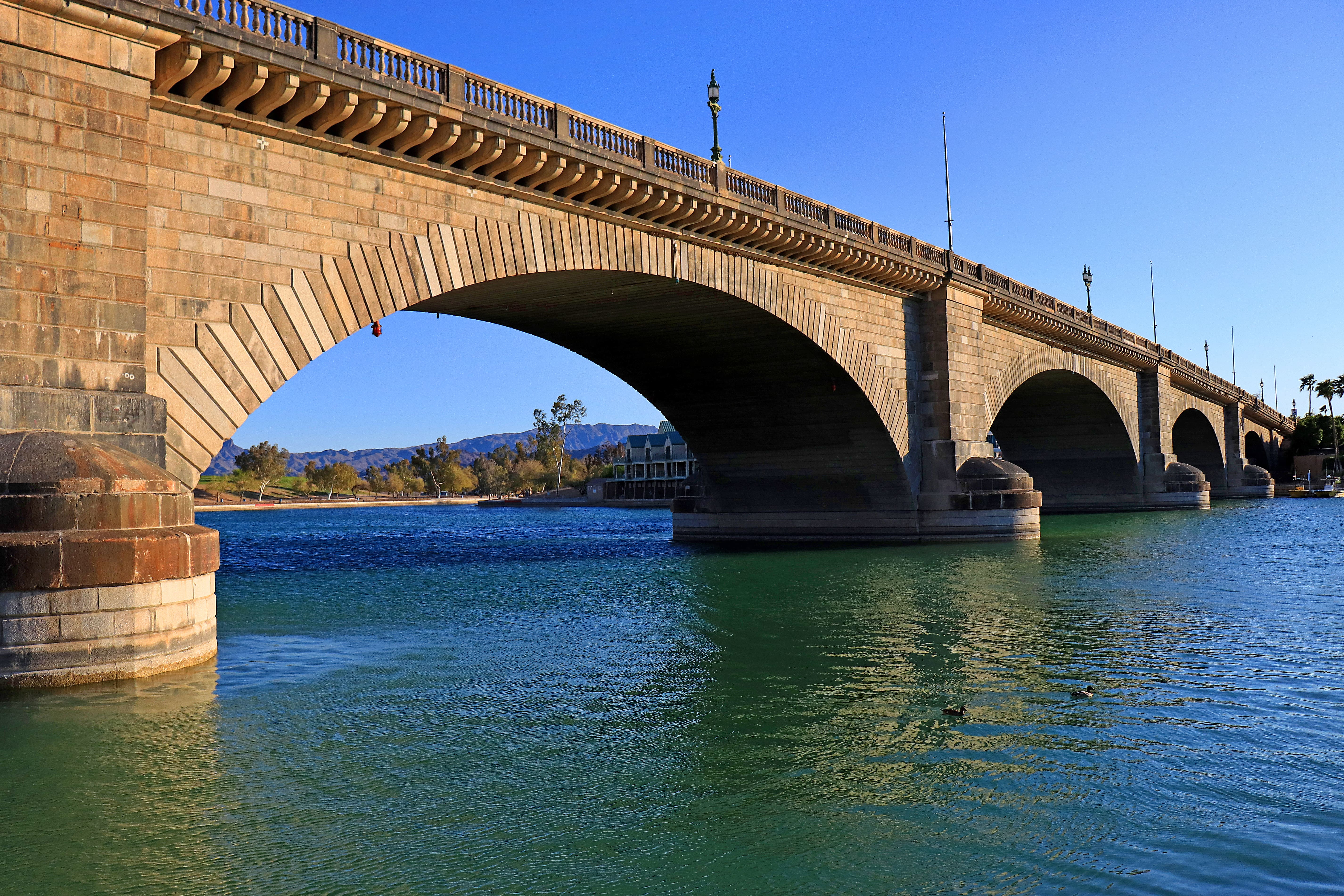 Bearing battle scars, bullet holes, and inscriptions from World War II soldiers, the famed London Bridge, the very same bridge that spanned the Thames River for 137 years, has manifold stories to tell. It survived the Battle of Britain and has felt the footsteps of British royalty.

This bridge was not the first iteration; there have actually been several bridges bearing the name “London Bridge” over the Thames. On July 4, 1823, architect John Rennie’s design was accepted for a new bridge; it opened in London on August 1, 1831.

It is Rennie’s bridge that now spans Lake Havasu in sunny Arizona. Some say it is haunted, regularly visited by friendly spirits. Whatever the case, this 188-year-old structure is Lake Havasu City’s largest and oldest antique.

So how did London’s most famous bridge come to be located in the middle of the Arizona desert? We must travel back centuries, and over 5400 miles for the answers.

For nearly 2000 years, beginning with a wooden crossing believed to have existed in the first century A.D., London had a bridge that crossed the River Thames. In 53 A.D., Roman Legions built a pontoon bridge of timbers from nearby woodlands.

There is little further mention of a London Bridge until the reign of King Edgar (959-975 A.D.), when there is reference to a bridge that was so broad, two wagons could pass on it. That bridge stood until 1014, when Danish pirates seized London. The British then enlisted the help of Viking chieftain Olaf Haralsen. 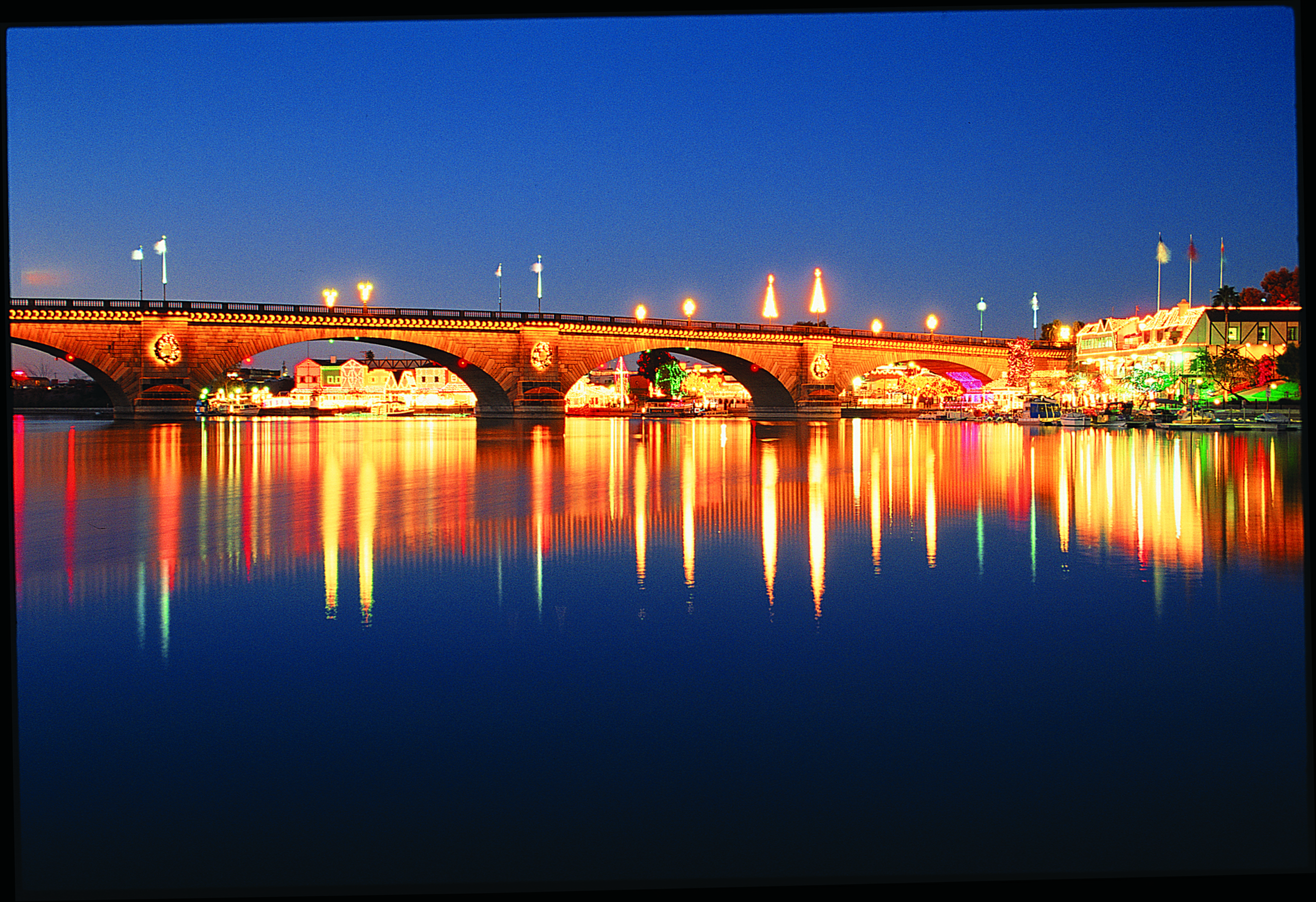 Olaf and his men covered their longships to protect themselves from spears and rocks being hurled from London Bridge, rowed up to the pilings and tossed stout ropes around them. They then rowed downstream, pulling the bridge and everything on it, into the water.

Olaf’s minstrel composed new verses for his master’s saga, beginning “Stridsdjerv Brot Du Londonsbro”. That phrase later translated into English as “London Bridge is broken down”, and from this, the nursery rhyme evolved. By 1176, a successor to that bridge had been twice destroyed and twice rebuilt; Londoners chanted the English version of Olaf’s saga, revising the lyrics to include “Build it up with stone so strong.”

The first stone London Bridge was completed in 1209 during the reign of King John. For over 600 years, this bridge was the key crossing point of the Thames, carrying people, goods and livestock across the river. With its many shops, houses, churches, and gatehouses built onto the bridge, it was an iconic feature of the city of London. Large numbers of people traversed the bridge, passing beneath the Drawbridge Gate, otherwise known as Traitor’s Gate. Ed Walker, Vice President of Lake Havasu’s Museum of History, tells of the grisly practice of displaying severed heads of traitors atop the gate.

“The practice of beheading was a fairly common form of execution in Great Britain during the time when capital punishment was legal,” Walker said. “Displaying the heads of traitors gave both locals and visitors to the city of London a persuasive message about the consequences of plotting against the King or Queen. Records are scarce, but all told, there are 11 spirits that visit the London Bridge in Lake Havasu City.”

How did they get to Arizona? “Blood from the severed heads, now resting atop spikes along the Drawbridge Gate, had seeped into the stones of the old bridge. Many of those same stones were used to construct the new stone bridge, which now spans Lake Havasu in Arizona. The spirits appear to be friendly, considering their macabre past.” 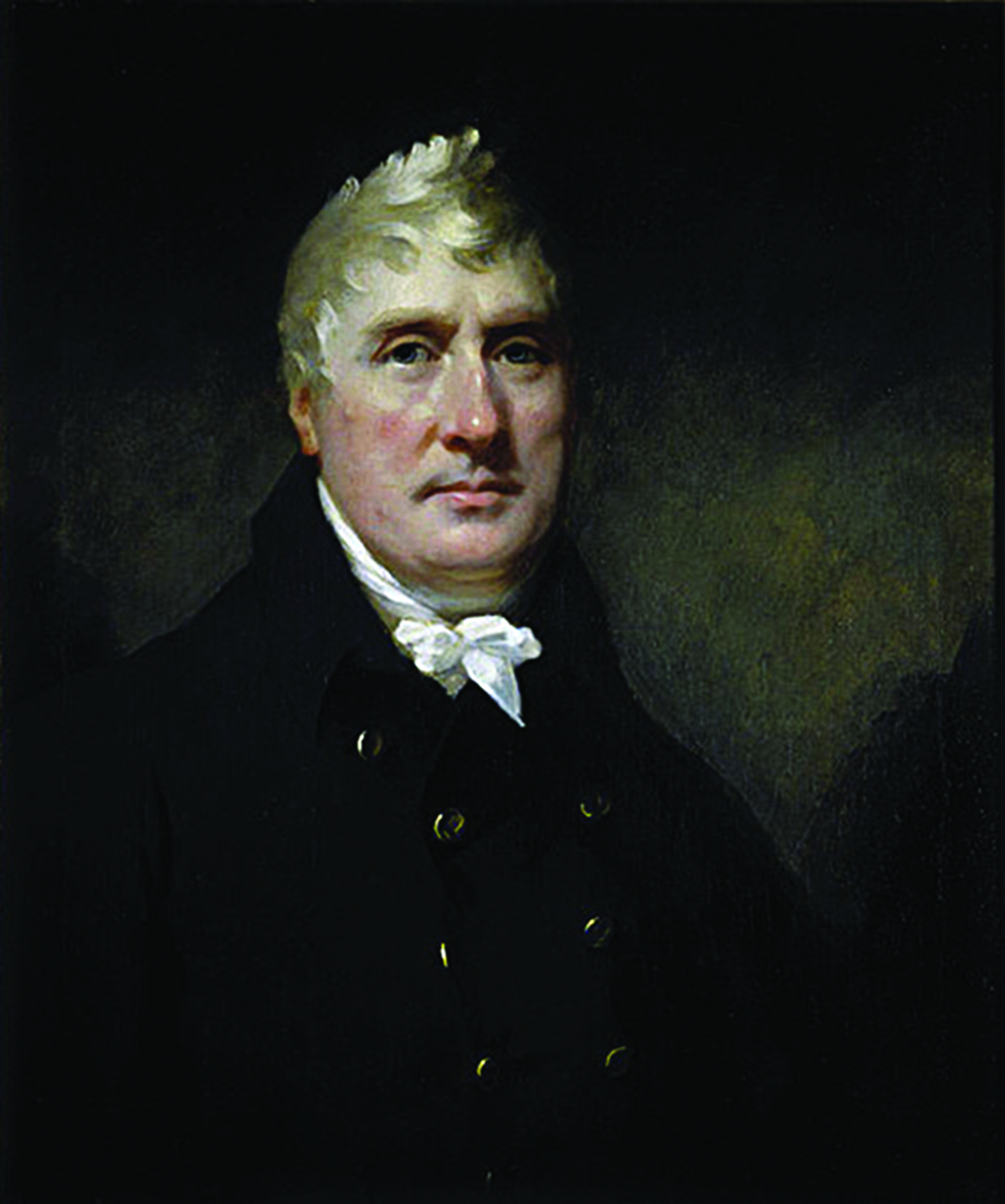 The bridge in Lake Havasu City was designed by a Scotsman, Sir John Rennie. His London Bridge is an outstanding example of 19th Century skill in masonry design and construction, and was the second, and last, stone bridge built over the Thames. Rennie’s bridge was dedicated in London on August 1, 1831, during the reign of King William IV. It is a five-arch bridge constructed of granite stonework quarried at Dartmoor, Devon, England. For seven years, daily employment of 800 men was required to build the structure.

In 1958, Robert P. McCulloch, Sr., American entrepreneur, flew over the Arizona desert in search of a test site for his outboard motor business. Spotting an abandoned U.S. Army Air Corps site that fronted Lake Havasu, McCulloch envisioned a planned community that would support his business ventures. C.V. Wood, mastermind behind the original Disneyland, joined the enterprise, and together they created Lake Havasu City in 1963.

In 1964, McCulloch purchased 26-square-miles and was soon building his new city. With no roads or buildings, McCulloch was the true motivator behind development; creatively, he saw the London Bridge as a way to attract visitors as well as permanent residents.

The famed bridge was offered for sale in 1967, with McCulloch placing the winning bid of $2,460,000 on April 18, 1968 (over $17 million in today’s dollars). McCulloch competed with several other bidders for the bridge, including entertainer Red Skelton.

Terms of the sale required the new owner to pick up the bridge pieces in London and transport them at the buyer’s expense to its new location. This added $7 million to the overall costs involved, not including the land that McCulloch had already purchased in Lake Havasu City. 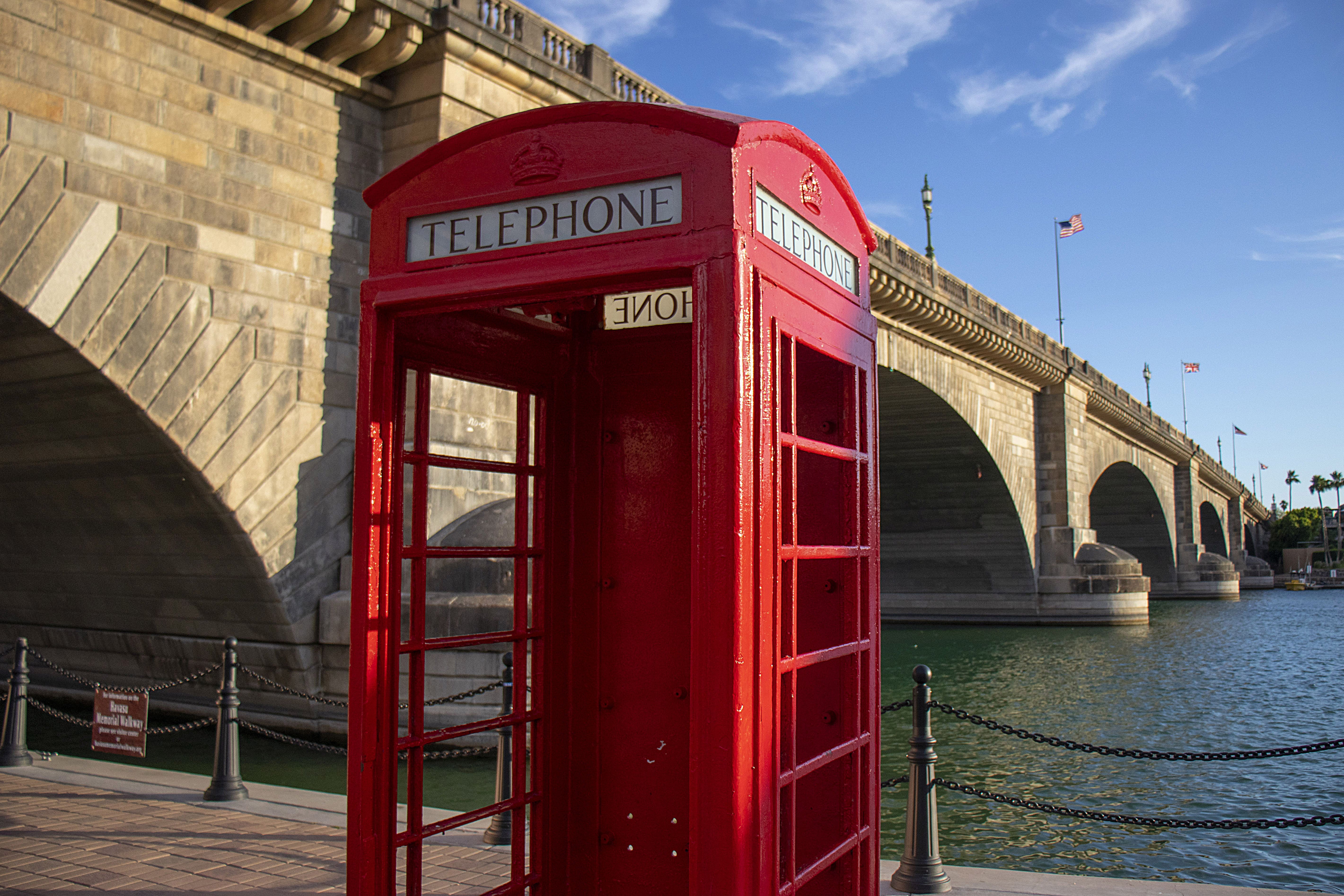 To avoid paying a tariff on top of the purchase price, U.S. Customs & Border protection declared the bridge an antique. In 1968, London Bridge entered into the Guinness Book of Records as the largest antique ever sold!

Although it has been said that McCulloch bought a bridge that he didn’t need, for a river that he didn’t have, the relocation of the London Bridge was ingenious, granting a formerly unknown desert oasis an instant cultural identity and conferring immortality on a historic, but structurally ordinary, bridge.

Reconstruction in the Arizona Desert

The morning of July 9, 1968, brought the first truckload of bridge stones to Lake Havasu City. More than 850 tons of granite blocks dismantled in London had been shipped to Long Beach, California, via the Panama Canal, and then trucked the rest of the way. A total of 10,276 numbered stones, together weighing 22 million pounds, was sorted and reassembled in the desert, from 1968 to 1971, utilizing a crew of 40 men.

Robert Beresford was the architect that supervised reconstruction of the London Bridge in Lake Havasu City, using copies of Rennie’s original plans, dated 1824. Each piece of granite was marked with four numbers: the first indicated which arch span, the second noted which row of stones and the last two indicated which position, in which row.

Reconstructing the London Bridge in Lake Havasu City was done in the same manner as the Egyptians were thought to have built pyramids. Sand mounds beneath each arch were carefully formed to the profile of the original bridge arches, serving the same function as molds.

The core structure, built of hollow steel-reinforced concrete, serves several purposes. At 33,000 tons, it was both lighter and stronger than the 130,000 tons of Rennie’s solid granite design. This structure serves as a conduit for utility lines between the mainland and the island. The inside of the bridge is rarely seen by visitors for a number of reasons. Perhaps it is just as well, as it is home to a very large colony of bats, which have found a perfect cave for their needs.

A mile-long ‘bridgewater’ channel was dredged after all the sand was removed, so that water flowed under the bridge from the main body of Lake Havasu into Thompson Bay. The man-made channel created an island from what had been a peninsula known as Pittsburg Point, projecting out into Lake Havasu.

Adorned along the London Bridge, intricate lamp posts were crafted from cannons seized in the 1815 Battle of Waterloo. Cannons were melted and forged into the unique lamps, gracing the bridge and lighting the way for tens of thousands of residents and visitors. Symbols of protection and guidance among sailors, dolphins decorate the lamp posts. Some say that the lamp post construction was the earliest recycling project in London.

In total, it took three years to reconstruct the bridge, from the laying of the cornerstone in September 1968, to the dedication on October 10, 1971. Many British and Arizona officials were guests at the grand event, which included close to 100,000 participants. Buried in the near abutment is a time capsule containing tribal tokens from the Indians who lived there, the same people who made McCulloch an honorary chief while they invoked good fortune on the massive undertaking.

Although repeatedly a target during warfare, the bridge never actually sustained heavy damage from German air attacks and bombing raids. It does, however, still bear scars from machine gun fire and a remembrance of soldiers trying to survive those attacks.

Jan Kassies, Director of Visitor Services at Go Lake Havasu, leads 90-minute tours across the famed London Bridge. Tours take visitors on a stroll along and across the bridge, allowing them to see first-hand the scars and graffiti from WWII soldiers that permanently mar the historic bridge. 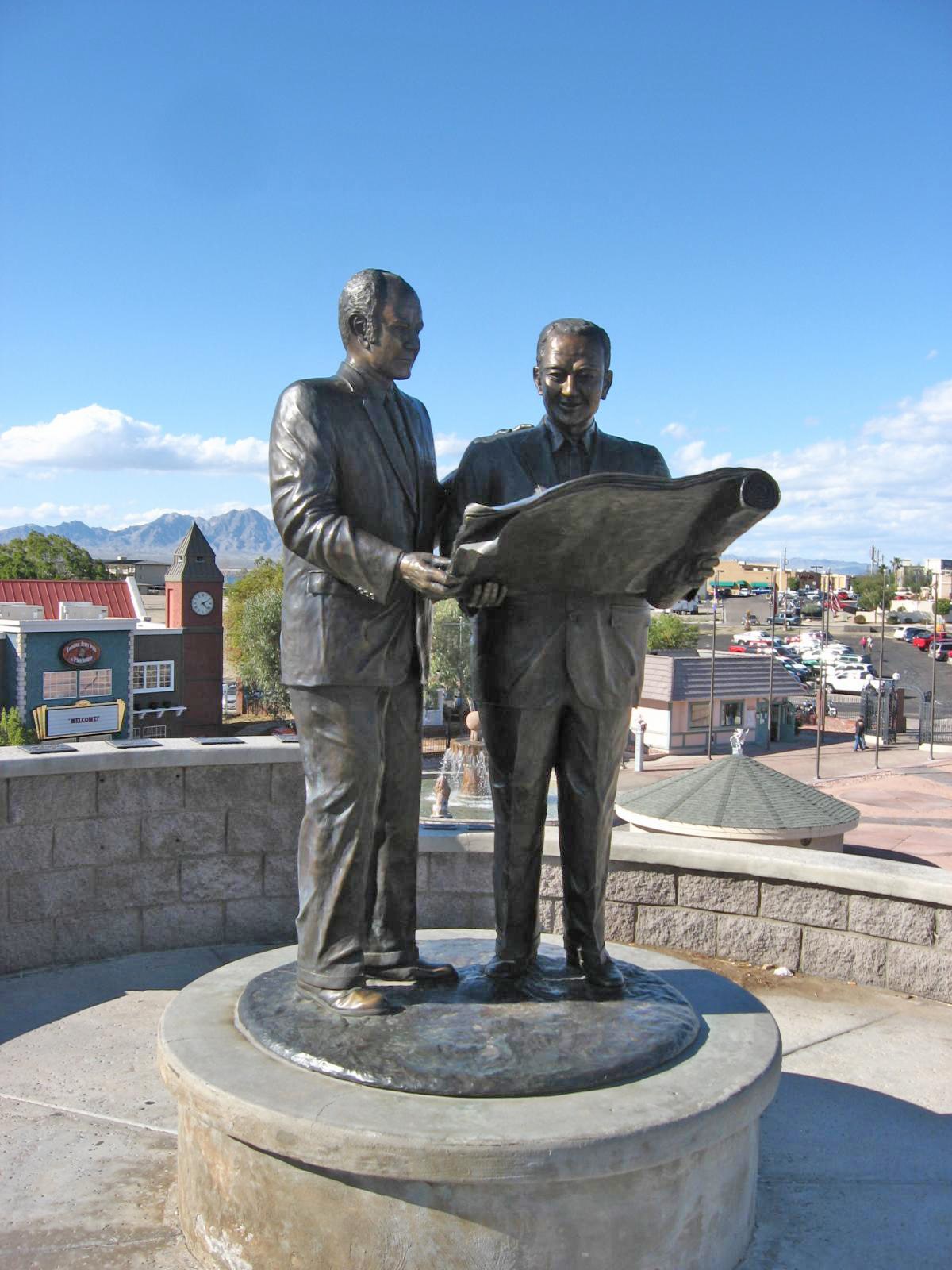 On his tours, Kassies tells the story of Sergeant Merrill Wayne Fitzwater: “When Infantry Squad Sergeant Fitzwater was stationed in England in 1942, his unit, with the First Infantry Division, participated in a demanding field maneuver. Sgt. Fitzwater’s squad was rewarded with a weekend pass. They went to the London Bridge, where Sgt. Fitzwater immortalized his and his scout’s name, Pfc. Smith, along with the date, August 1942, on one side of the bridge’s stone blocks. In 1978, and again in 2011, Fitzwater visited the bridge in Arizona, noting that the names and date had weathered quite significantly, now making the markings marginally distinguishable.”

McCulloch died at age 65 on February 25, 1977, 10 years shy of Lake Havasu City becoming a legal municipality. The city stands today as McCulloch’s legacy and a vivid example of his imagination, passion, and tenacity. The most visible effect McCulloch had on Lake Havasu City was the London Bridge, the world’s largest and most expensive antique. McCulloch had great vision in turning a spot in the desert into a bustling city and holiday resort. Now one of the most popular attractions in Arizona, second only to the Grand Canyon, year-round events draw visitors from around the globe. “In 2018, nearly 3.8 million people traversed the London Bridge, making it by far the most visited man-made attraction in Arizona.” said Concannon. McCulloch purchased more than just a bridge; he moved an enormous piece of enduring history to the Arizona desert. While Lake Havasu City has continued to grow since its humble beginning, the Bridge remains the lakeside town’s most special centerpiece.

Read Next
The Resurrection of the Meteor City Trading Post
By Katharine McLaughlin
Meet Me at the Monte V
By Melanee Morin
The Saddest Trading Post on 66
By Blue Miller
The Man behind the Voice
By Brennen Matthews
The International Car Forest
By Blue Miller
The Most Famous Ranch in the World
By Efren Lopez
Read Next
Simple Days in Pontiac, Illinois
By Efren Lopez
9 Essential Books to build Your Route 66 Library
By Staff
Take Me Out to the Ballgame
By Anna Browning
The Clown Motel
By Alex Sallas
6 Living Ghost Towns in Arizona that Deserve a Visit
By Melanee Morin
Heart of the Navajo Nation
By David Schwartz
Read Next
Cattlemen's Cafe - Where Cowboys Eat
By Rachel Fernandez
Gem of the Ozarks
By Hayley Bell
Here It Is
By Jim Hinckley and Lea Loeb
Friends For Life
By Nick Gerlich
A Quiet Place
By Frank Jastrzembski
Carrying on Tradition
By Cecil Stehelin
Read Next
Women On the Route
By Katharine McLaughlin
Bigger, Brighter - The History of Advertising on Route 66
By Melanee Morin
Ka-Chow!! - The Cars Story
By Nick Gerlich
Defining the American Dream, One Sign at a Time
By Annabel Lee
When Fred Met The Mother Road
By Nick Gerlich