Words and Photographs by Wes Pope 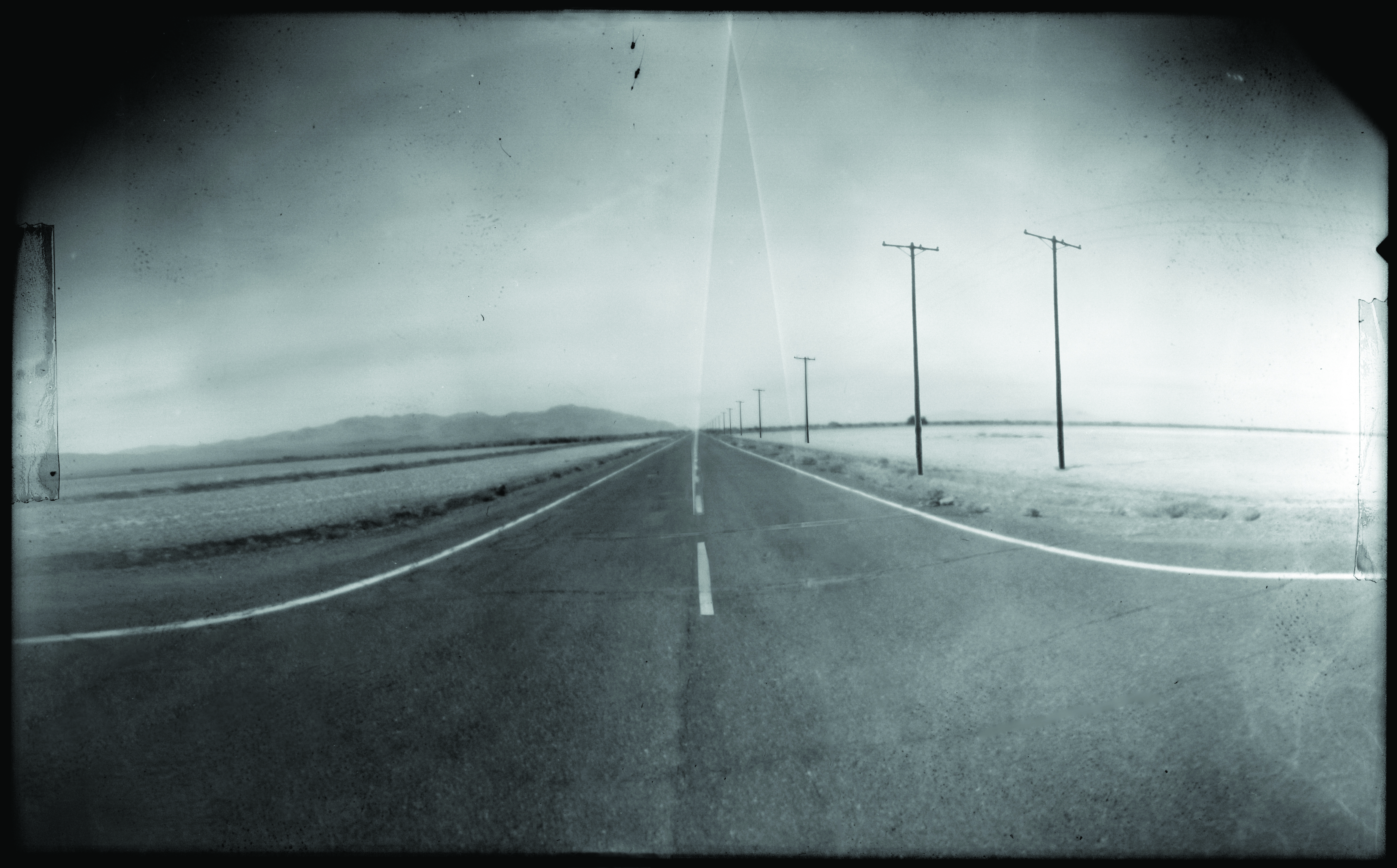 I first created my pop can pinhole cameras in 1998 while visiting my mother’s fifth grade class in southern California. A pinhole camera uses a tiny round hole – literally a pinhole – to act as a lens to create an image on a piece of film. Each of my cameras consists of two soda cans, with one sliding over the other to form a light-tight container. The pinhole is on one side of the can with the film curving around the opposite inside of the can. A paper flap slides over the hole to keep out the light until I am ready to make an image. I then hit the road to Chicago and used the cans to take photographs along the way. After 20 years, I am finally publishing the project as a book, Route 66: A Pop Can Camera Odyssey. Utility poles and broken down concrete, the boarded up dreams of mom and pop castles. All put together, these little pieces add up to create the American Parthenon. And so I hope it goes with these photos. You plan and plan and then you start your exposure and see what happens. 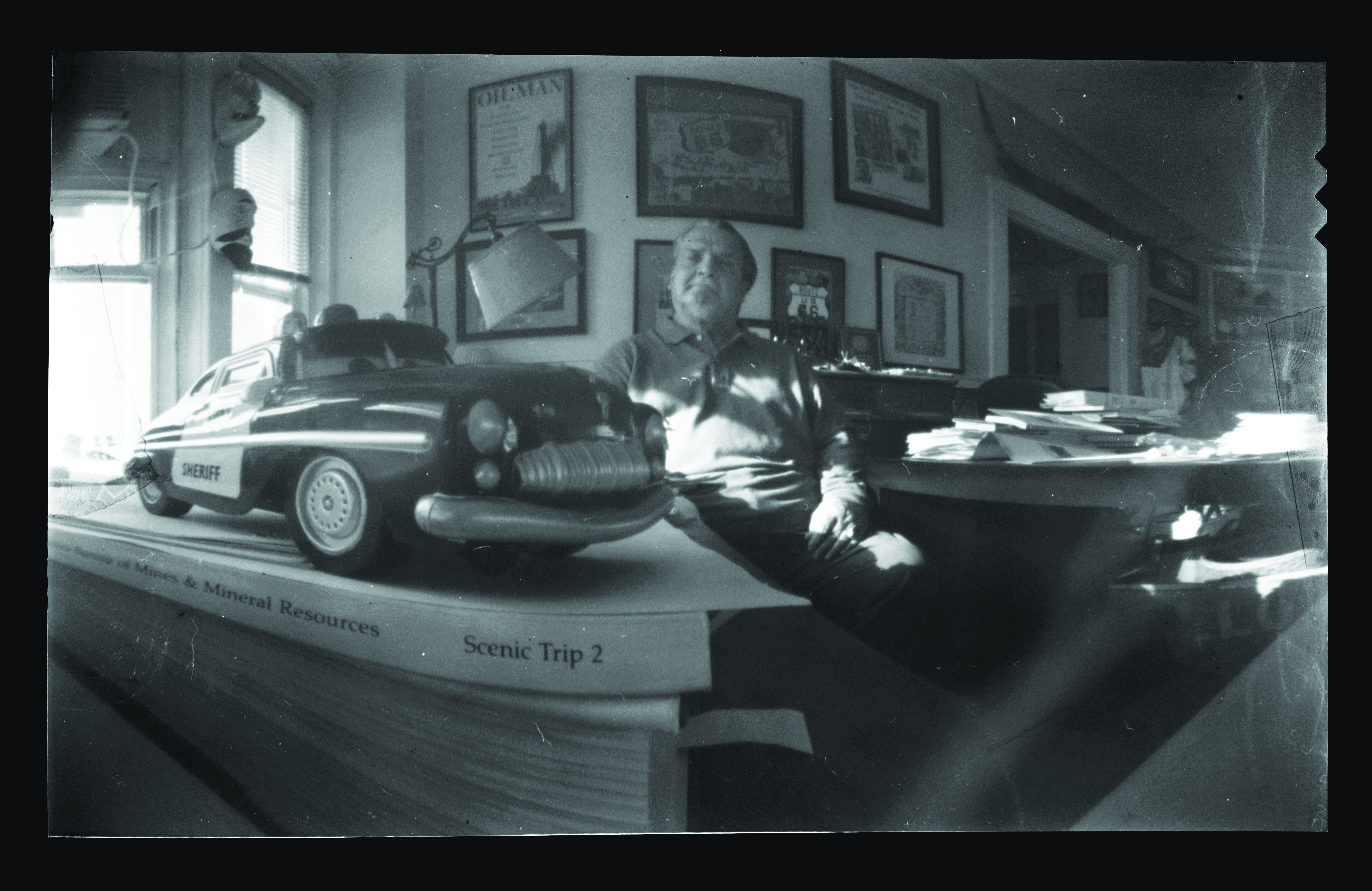 Route author Michael Wallis in his writing studio in Tulsa, Oklahoma, in November 2017. Wallis graciously wrote the intro for my book. 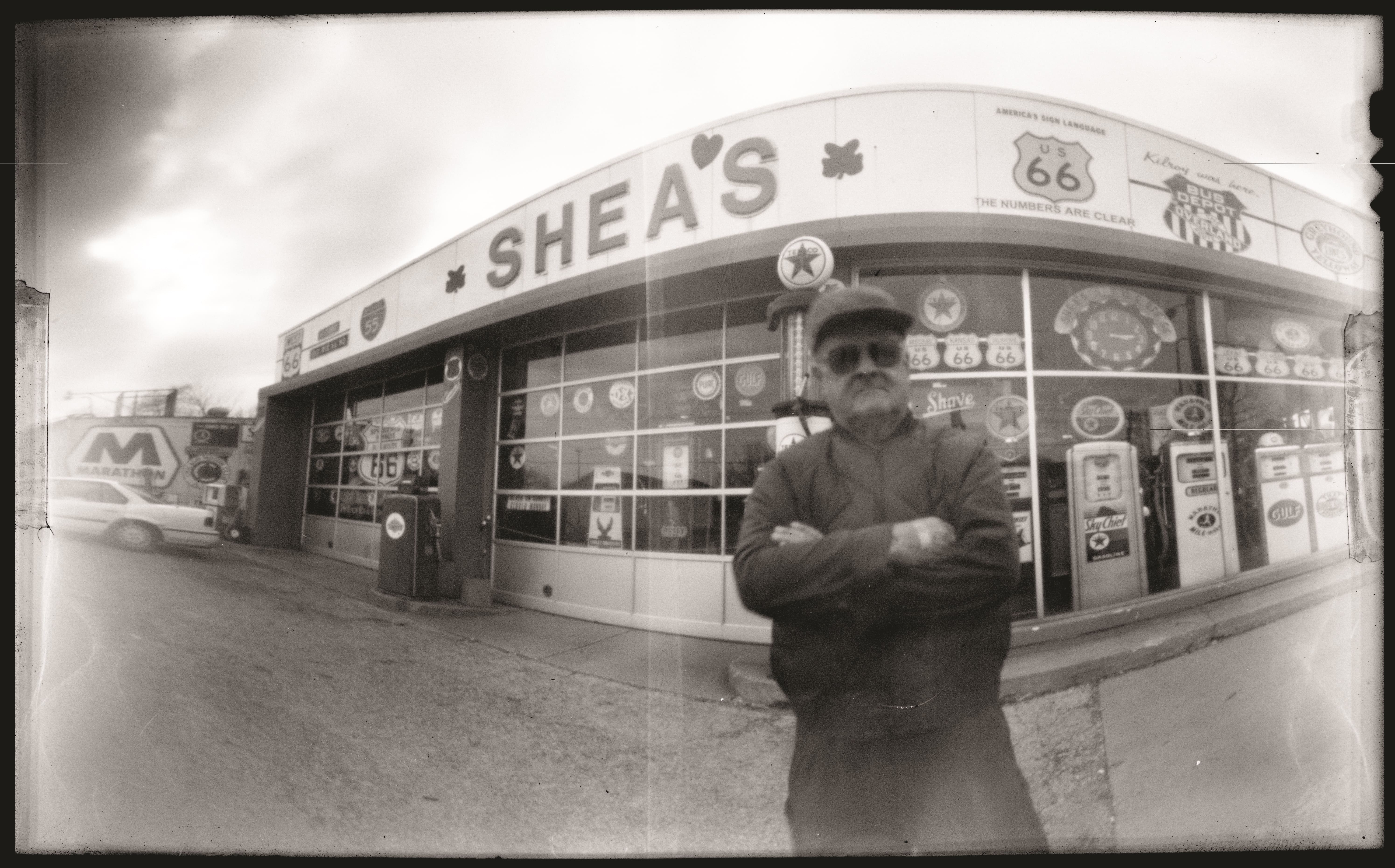 I took this portrait of Bill Shea outside his museum in Springfield, Illinois, in 2007. It was a return trip to deliver some prints from my first visit a few years earlier. Bill passed away in December 2013. 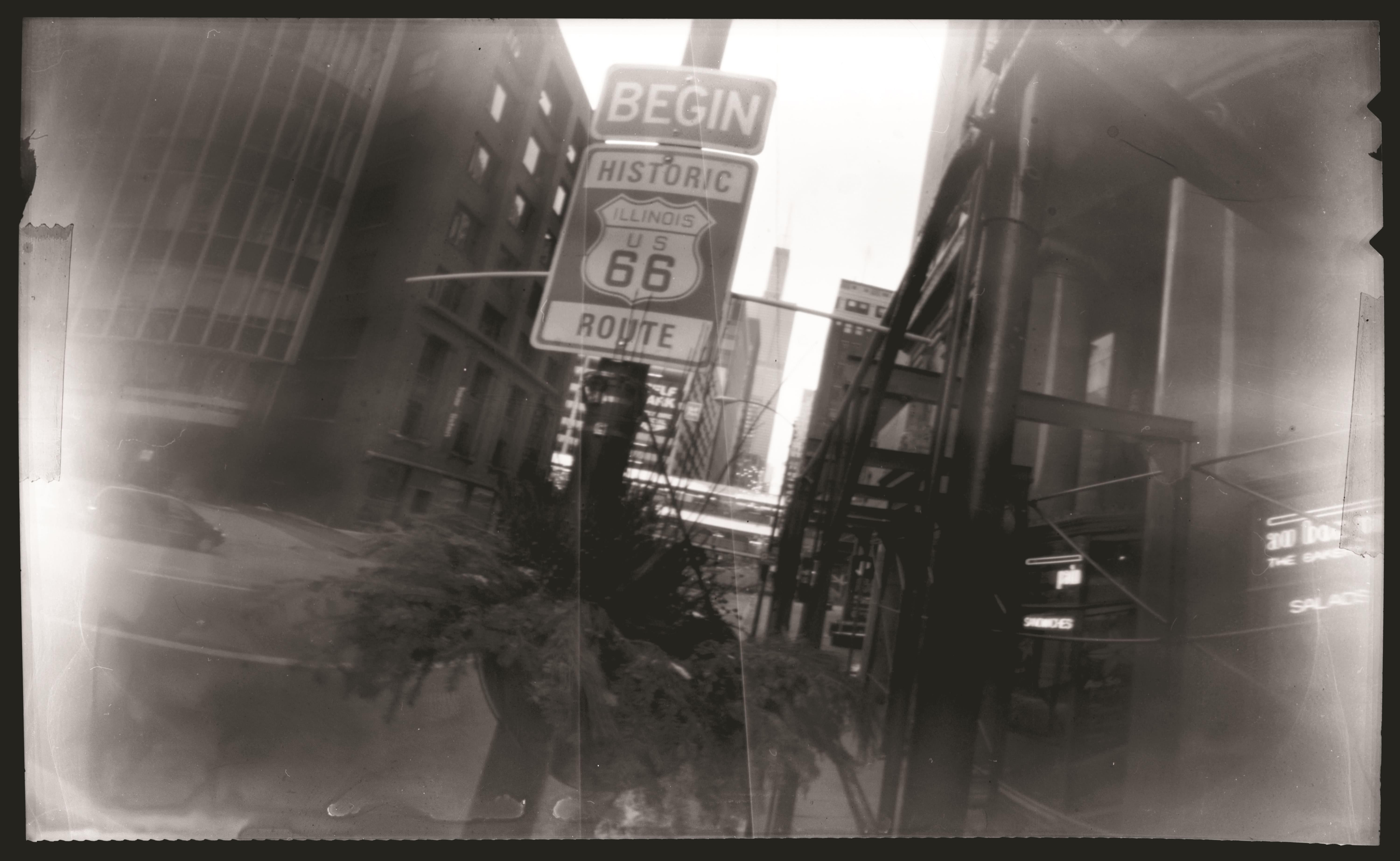 One of the starting points for Route 66 as marked by a sign on Adams Street in the Loop, Chicago. I took this one as part of the CITY 2000 documentary project. 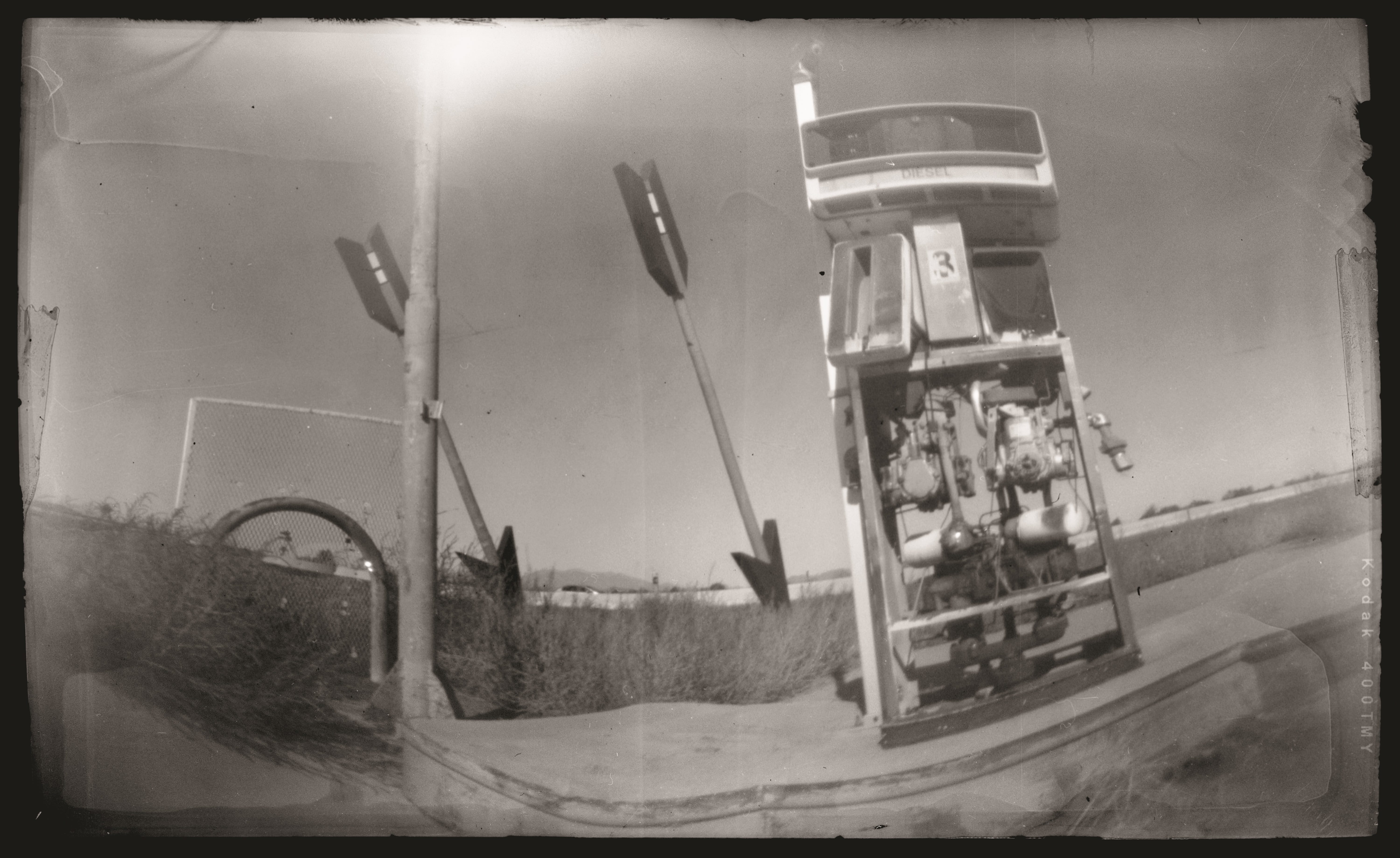 When I lived in Flagstaff, Arizona, in 2011, I wandered out to the now abandoned Twin Arrows Trading Post, east of town. 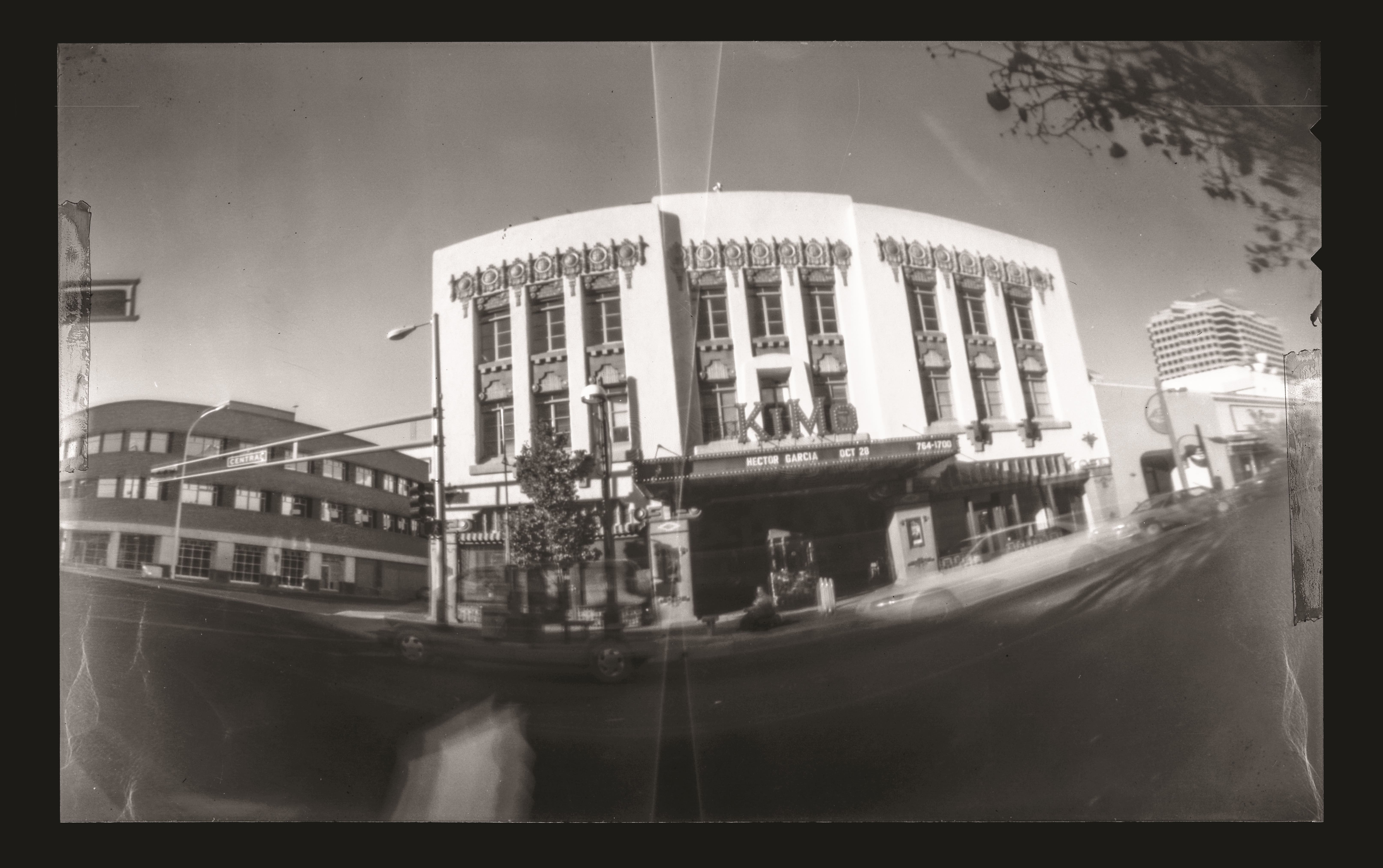 In 2001, I stopped to photograph the Kimo Theatre in downtown Albuquerque, New Mexico. 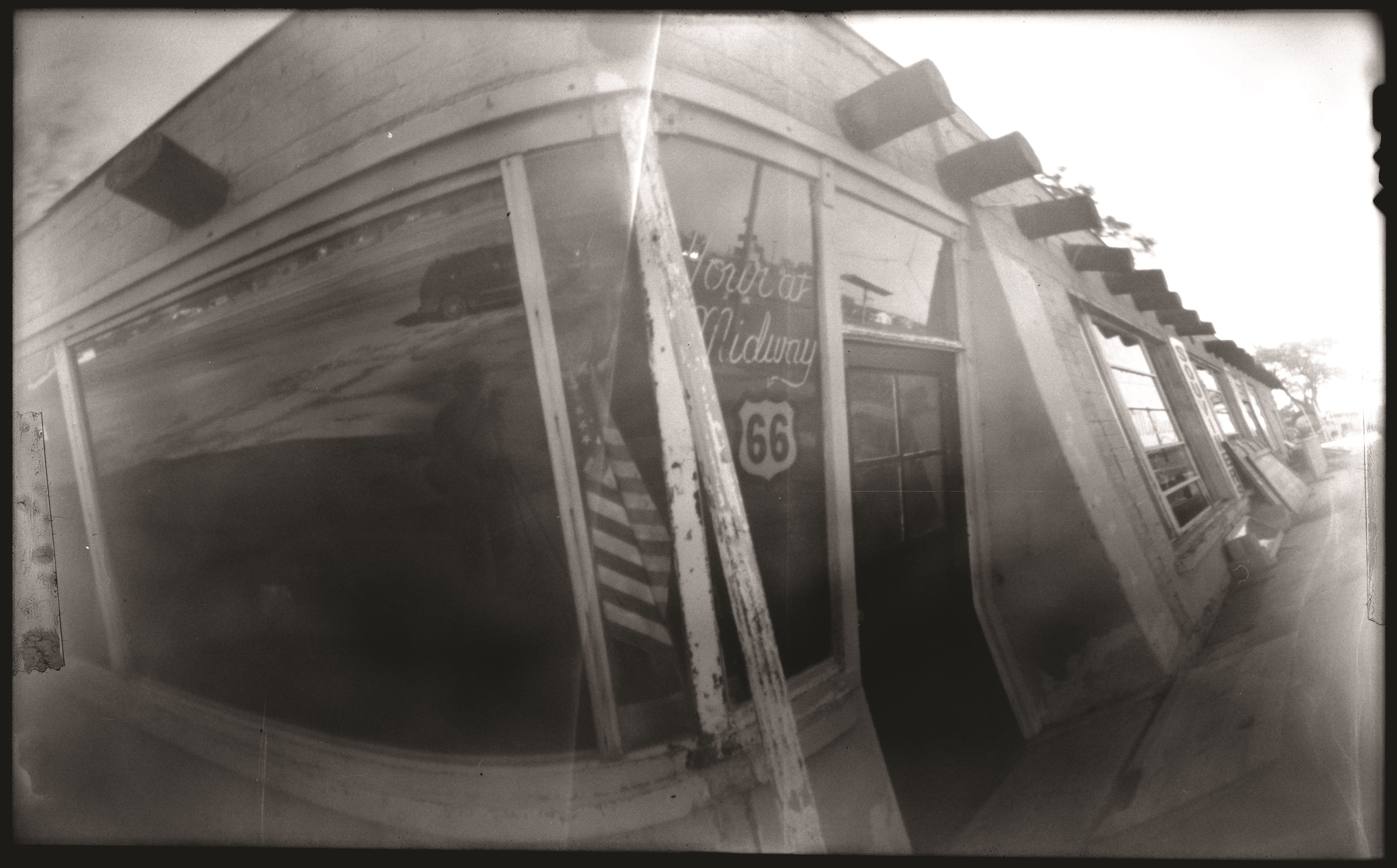 Distortion from the curved film in my camera adds to the bendiness of the Bent Door Cafe in Adrian, Texas. 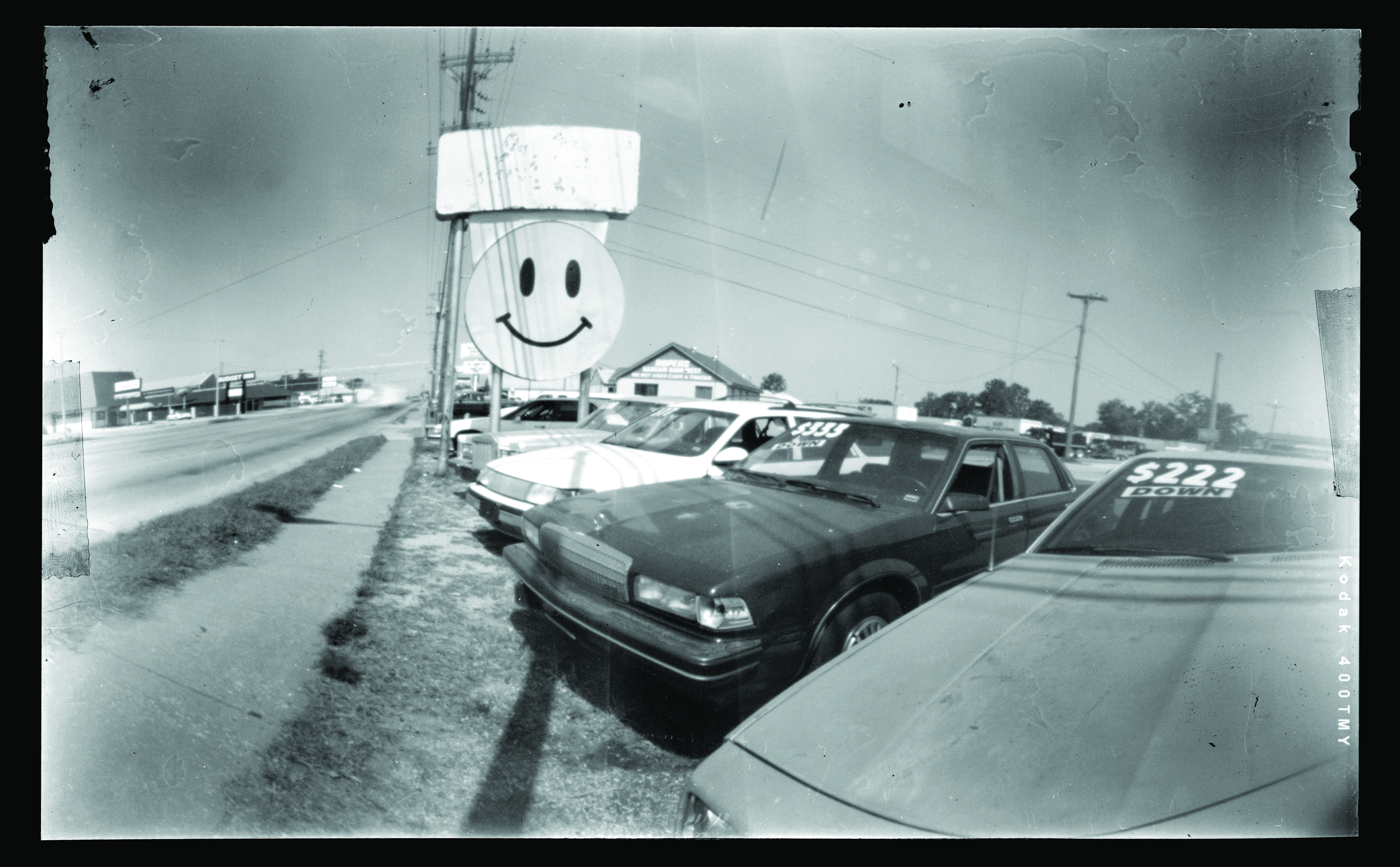 I found this happy used car lot on Route 66 near downtown Joplin, Missouri, in 2001. 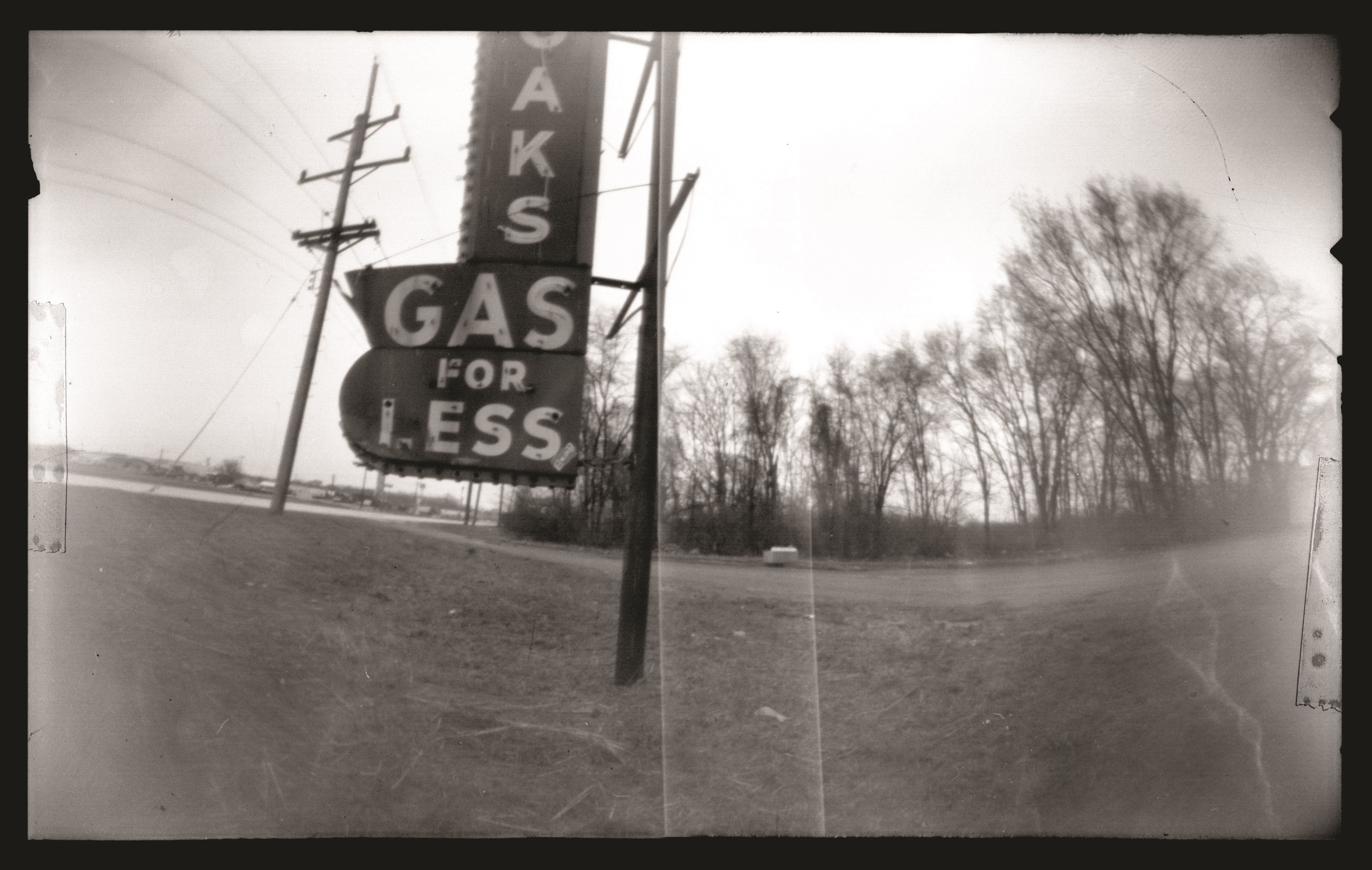 I visited the Twin Oaks Gas For Less sign near the east end of Chain of Rocks Bridge in Illinois in 1998. 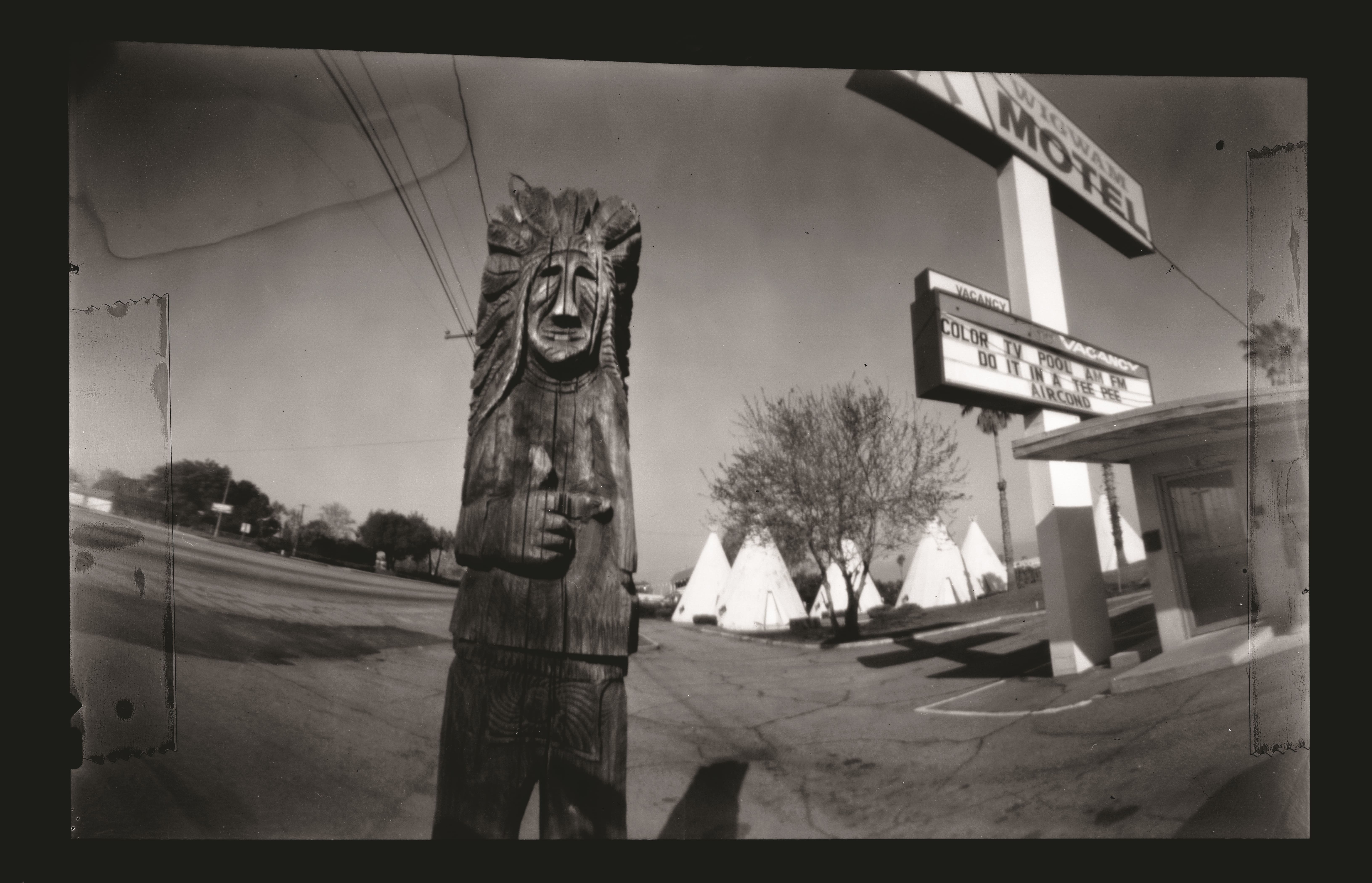 I took this photo of the Wigwam Motel in Rialto, California, long before it served as an inspiration for the Cozy Cone Motel in the film Cars. 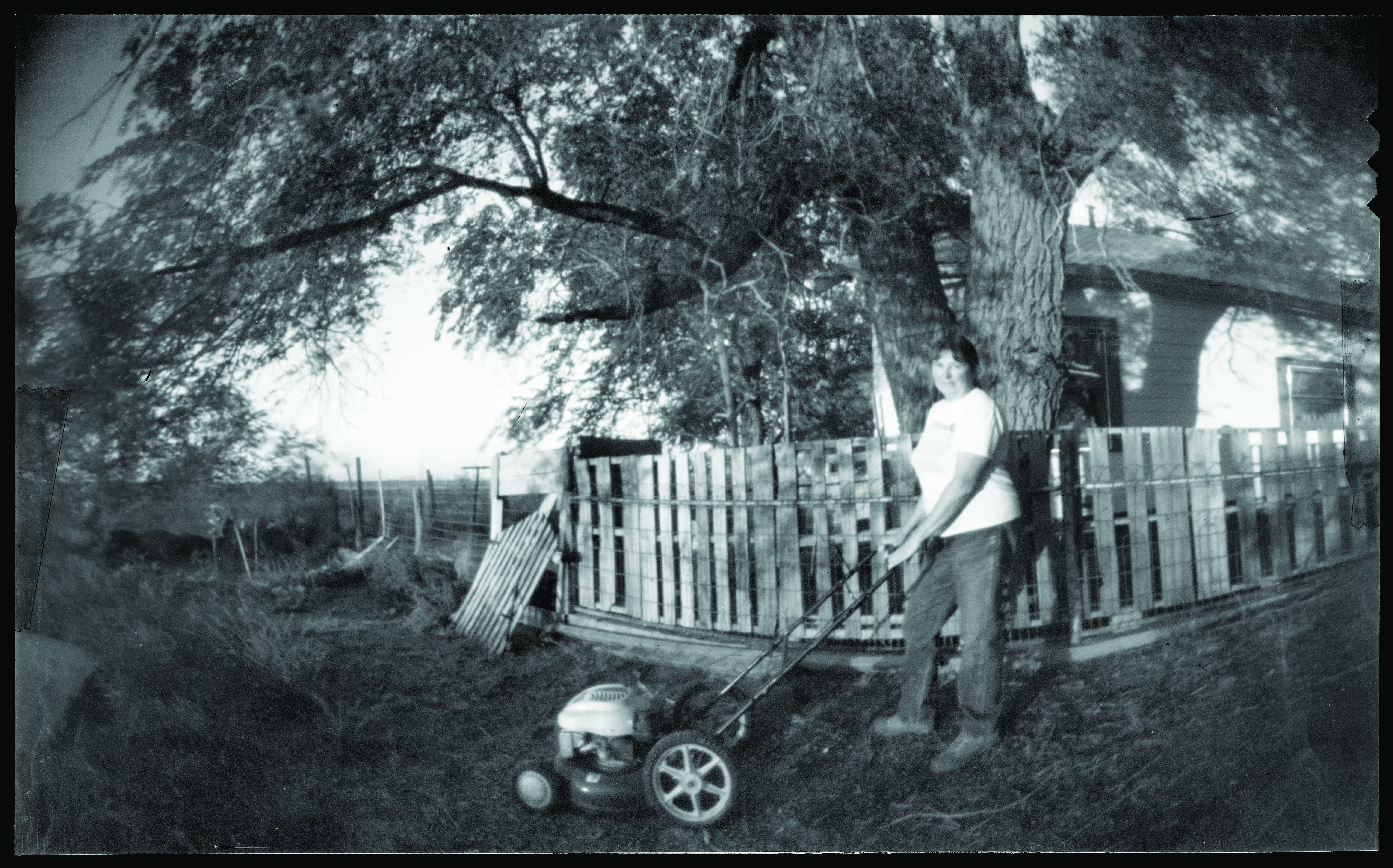 I photographed this Glenrio, New Mexico, resident mowing her lawn in 2001. Sadly, my notebook from this trip got lost along the way 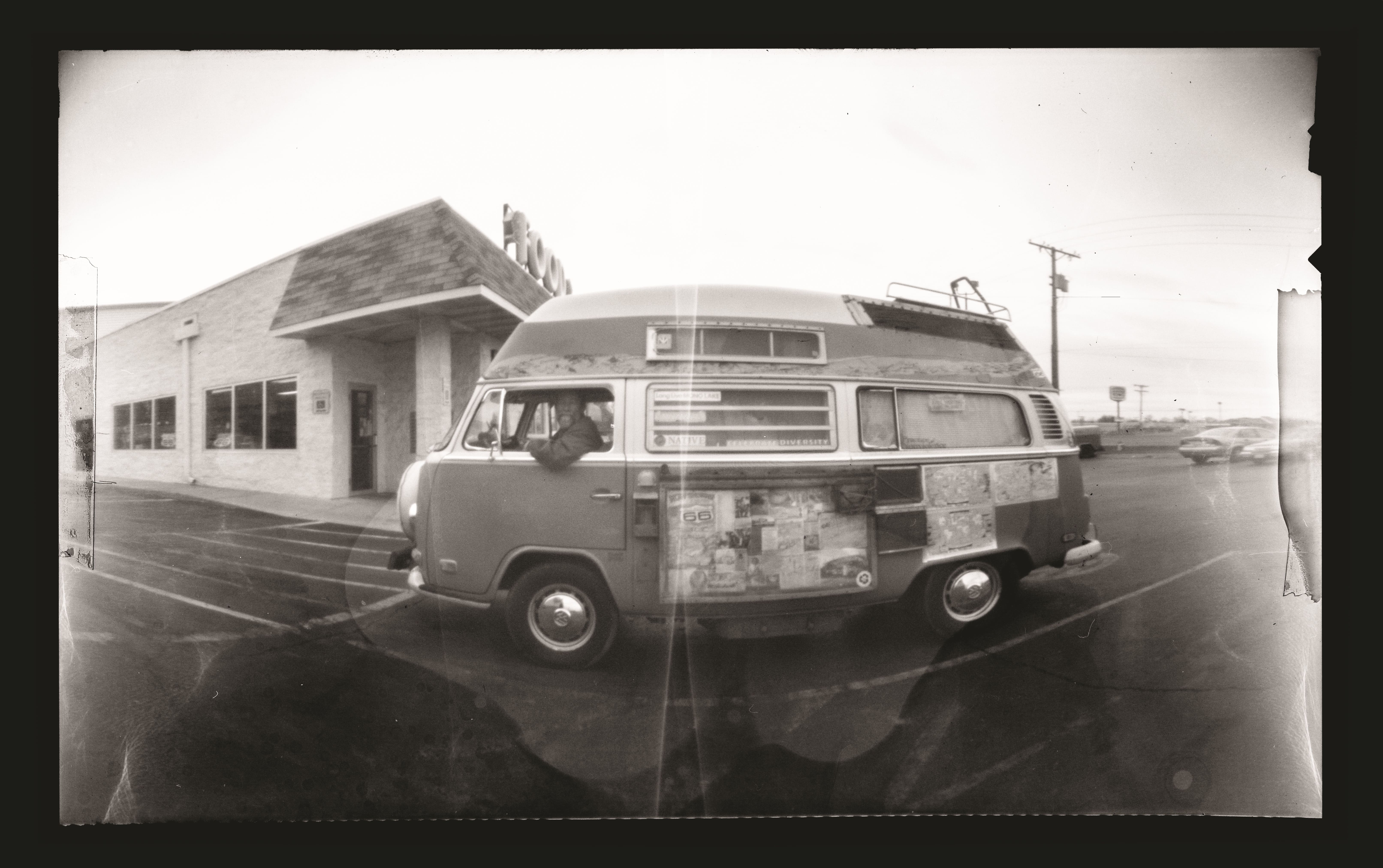 Bob Waldmire in his hand decorated 1972 VW van outside his family’s Cozy Dog restaurant in Springfield, Illinois, in 2001. Bob passed away in December 2009. 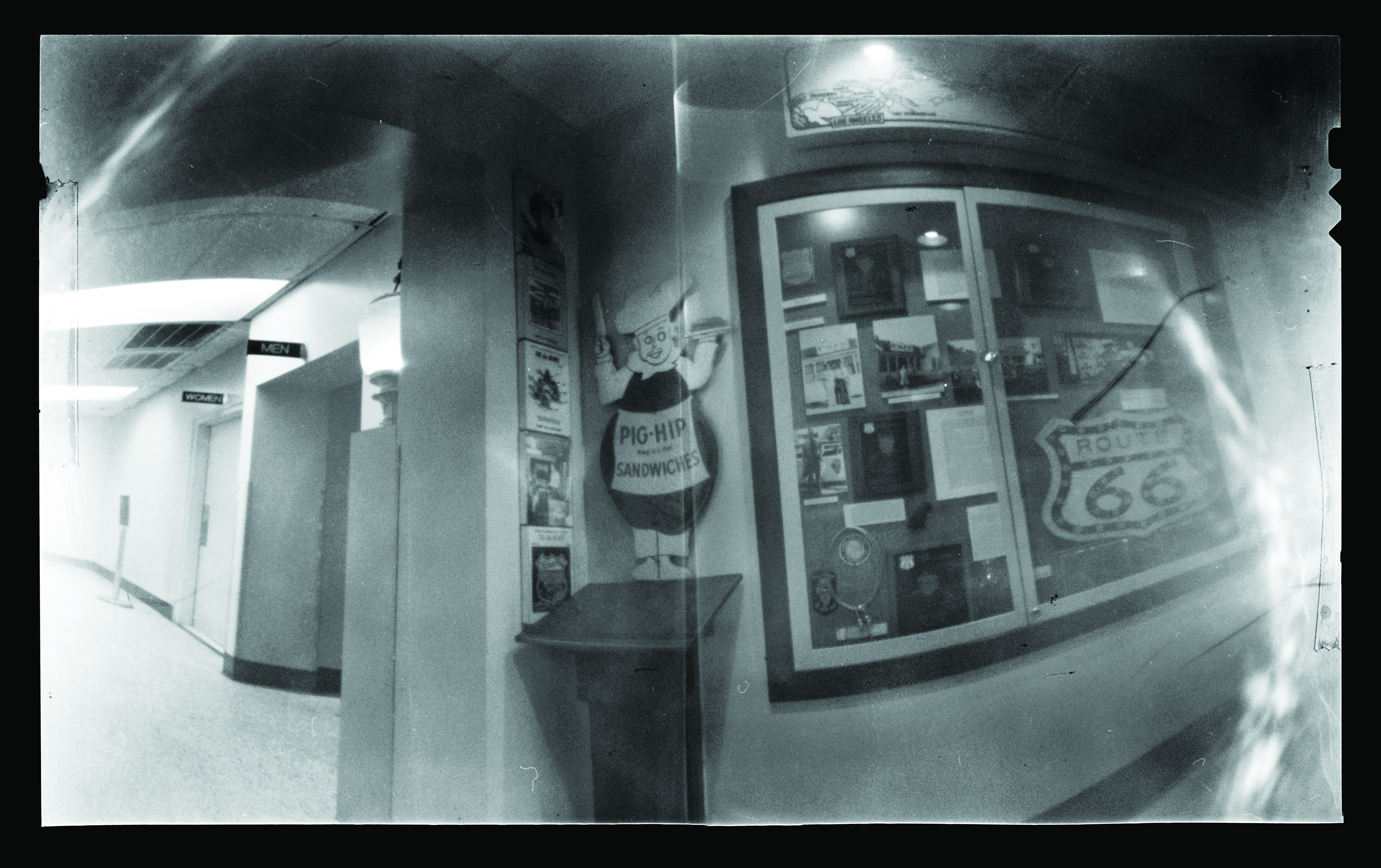 The Route 66 Hall of Fame when it was located on the way to the bathrooms at Dixie Truck Stop in McLean, Illinois. 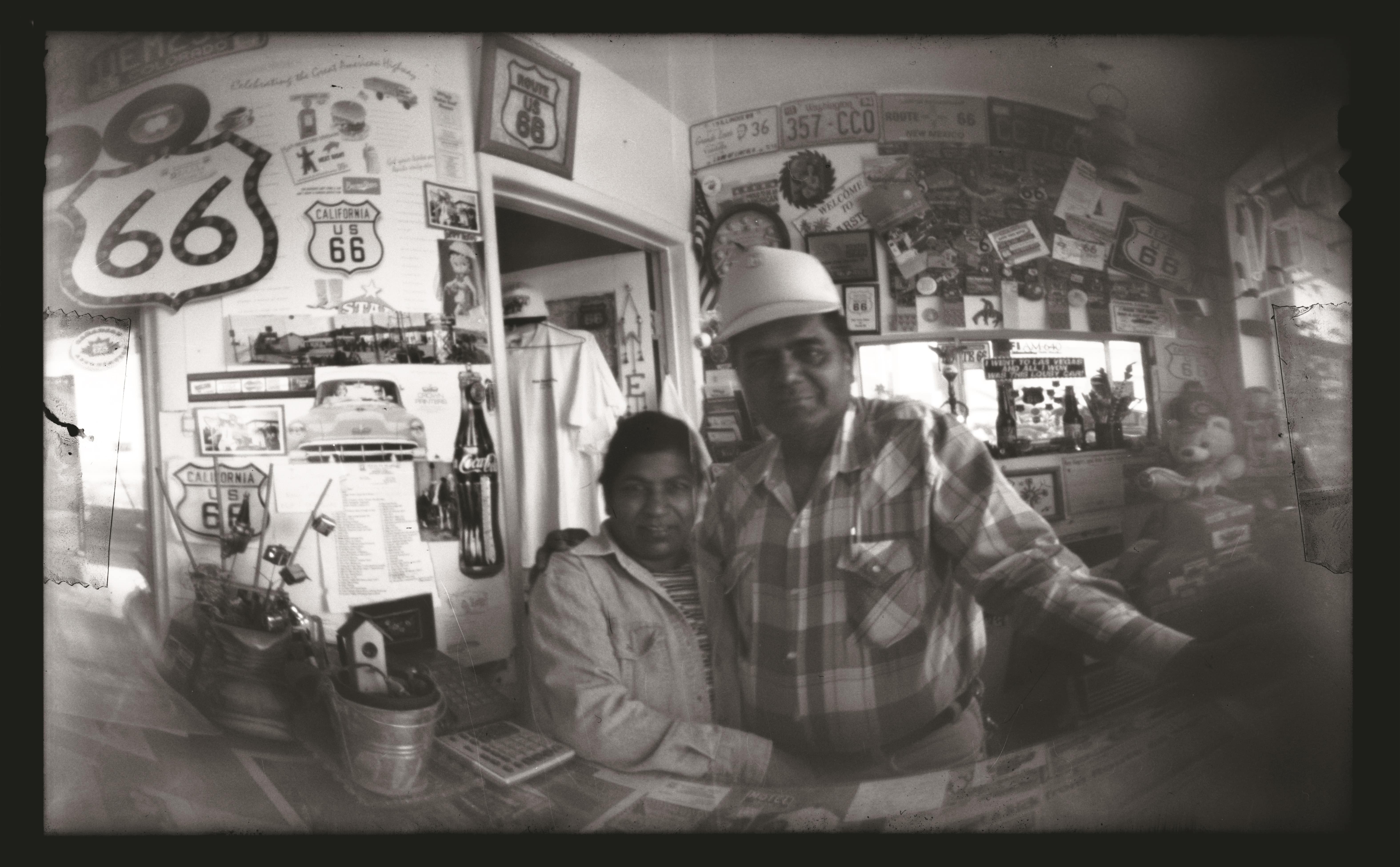 A 2001 portrait of Ved & Mridu Shandil, owners of the Route 66 Motel in Barstow, California.

Share this story
TwitterFacebook
Read Next
The Resurrection of the Meteor City Trading Post
By Katharine McLaughlin
Meet Me at the Monte V
By Melanee Morin
The Saddest Trading Post on 66
By Blue Miller
The Man behind the Voice
By Brennen Matthews
The International Car Forest
By Blue Miller
The Most Famous Ranch in the World
By Efren Lopez
Read Next
Simple Days in Pontiac, Illinois
By Efren Lopez
9 Essential Books to build Your Route 66 Library
By Staff
Take Me Out to the Ballgame
By Anna Browning
The Clown Motel
By Alex Sallas
6 Living Ghost Towns in Arizona that Deserve a Visit
By Melanee Morin
Heart of the Navajo Nation
By David Schwartz
Read Next
Cattlemen's Cafe - Where Cowboys Eat
By Rachel Fernandez
Gem of the Ozarks
By Hayley Bell
Here It Is
By Jim Hinckley and Lea Loeb
Friends For Life
By Nick Gerlich
A Quiet Place
By Frank Jastrzembski
Carrying on Tradition
By Cecil Stehelin
Read Next
Women On the Route
By Katharine McLaughlin
Bigger, Brighter - The History of Advertising on Route 66
By Melanee Morin
Ka-Chow!! - The Cars Story
By Nick Gerlich
Defining the American Dream, One Sign at a Time
By Annabel Lee
When Fred Met The Mother Road
By Nick Gerlich
Read Next
Justin Scarred, America is Still Out There
His Own Man - Scott Eastwood
By Brennen Matthews
A Conversation with Gary Sinise
By Brennen Matthews
Bringing the Route to Life - Jerry McClanahan
By Cecil Stehlin
A Conversation with Kevin Hart
By Brennen Matthews
A Conversation with Martin Sheen
By Brennen Matthews