A Saloon With A Story

New Mexico is a state unto itself — built upon the bones of ancient mythology, deep-rooted history and utterly breathtaking scenery. Poets, painters, and writers have continuously been inspired by its mythical aura, which is reflected within every inch of its curving, twisting landscape. The colors that sweep across its mountainous ridges and curved desert plains are astounding. On a typical summer’s day, shades of blue and purple oscillate between light and dark, as the steady movement of clouds overhead casts extended shadows on the ground, throwing a veil of mystery over this already enigmatic region. Situated in the heart of northern New Mexico, the extremely small town of Lamy is no exception to New Mexico’s otherworldly charm.

As a reflection of the town’s Spanish colonial heritage, Lamy was named after the Archbishop of Santa Fe, Jean-Baptiste Lamy. In Willa Cather’s Death Comes for the Archbishop, Archbishop Lamy’s life story is chronicled and set against the tumultuous backdrop of the Spanish-American War, much of which took place in the area encompassing Lamy. The town also sits near the Sangre de Cristo Mountain range, the translation of which means “Blood of Christ,” and aptly so — at dusk, on especially snowy evenings, its jagged peaks drip with the color of muted crimson, casting an ethereal light across the entire landscape.

And yet, despite its seemingly perfect surroundings, Lamy never grew into a burgeoning southwestern town. Instead, it closely retained its quaint, primeval essence, paying homage to both its colonial past and its Native American heritage. Around 500 years ago, following the onset of a devastating drought, the surrounding Native American population left, leaving their folklore and traditions behind. In truth, to gaze at the vast New Mexican sky is akin to reading the beliefs and desires of our native ancestors, whose influence exists in every aspect of the enchanted landscape — from its rocky, copper earth to its striking, azure horizons.

The town has few buildings, since its primary function was to help travelers along their journey between the West Coast and the city of Santa Fe. Built in 1909 for the Atchison, Topeka and Santa Fe Railway, Lamy’s railway station was designed in the Mission Revival style, featuring a red-tile roof, stucco walls and an interior with carved wooden beams and benches complemented by Spanish floor tiling.

Besides the station, there are only two structures of significance, considering the El Ortiz, the town’s Harvey House hotel, was torn down in 1943. One of them is Our Lady of Light Church, an abandoned place of worship dating from 1880, defined by white adobe walls, red-tile roofing and a solitary blue cross that stands outside its weather-worn doors. The other structure is the Legal Tender Saloon — the oldest operating bar in the state. When the Legal Tender was opened in 1881, it operated as Pfluegger’s Mercantile, serving as a general store for the tiny community in Lamy.

Last year, it was announced that Allan Affeldt and Daniel Lutzick of the Winslow Arts Trust (WAT) acquired the Legal Tender from the Lamy Railroad and History Museum with the aim of renovating it and reopening it as a restaurant and bar, with Chef Murphy O’Brien of the famed Café Fina as its restaurateur. For those unfamiliar with WAT’s work, Affeldt and Lutzick are known for restoring various southwestern masterpieces, such as the Harvey House hotels La Posada and La Castañeda. Along with Affeldt’s wife, Tina Mion, the group are very aware of the culture and history of the region.

According to Affeldt, the building has undergone three extensive renovations throughout its history. Yet, no one knew exactly how to get business at the Legal Tender booming — that is, until the WAT team decided to take the task of renovation upon themselves. 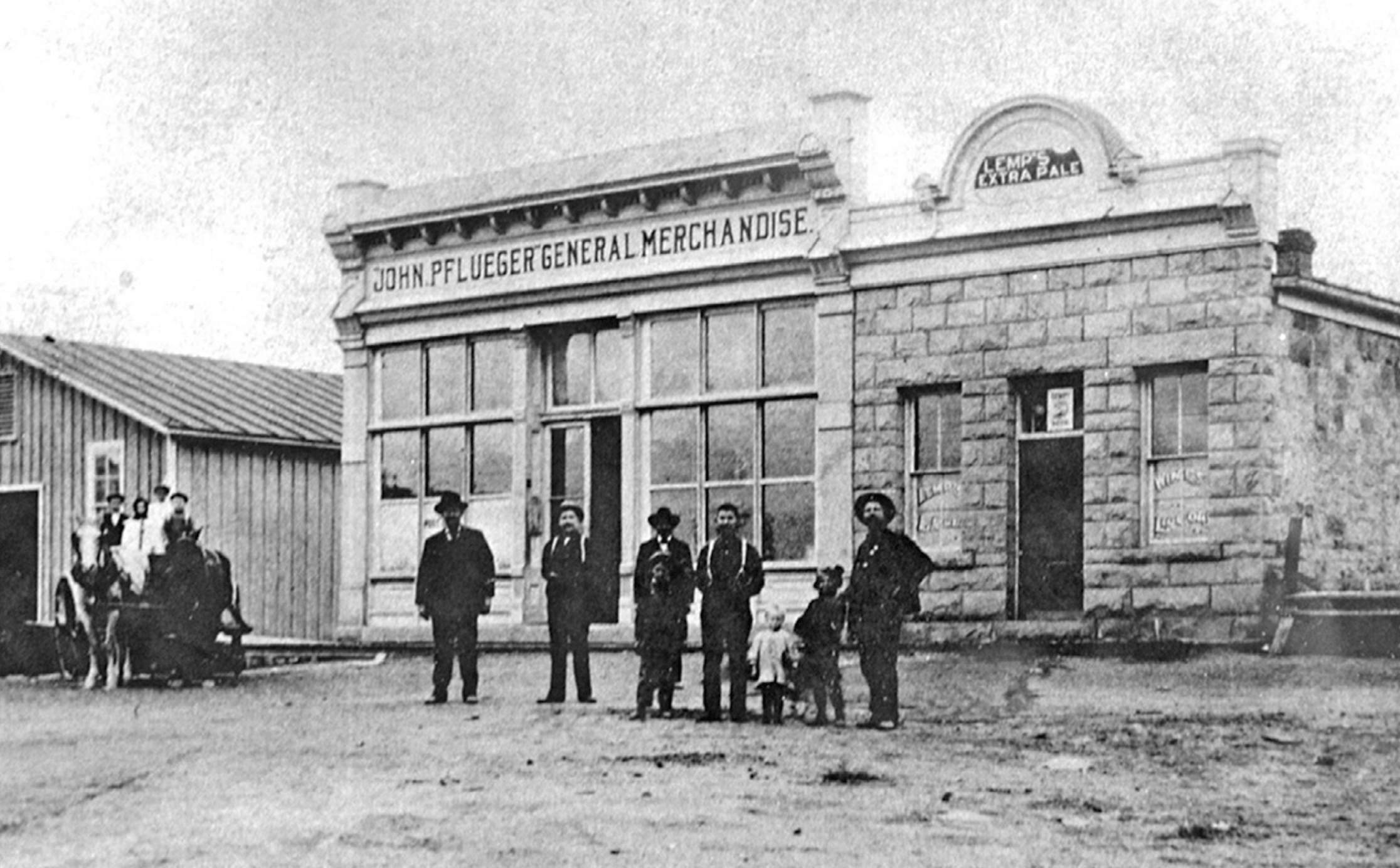 According to one of the founders of the Lamy Railroad and History Museum, Sam Latkin, the area that now makes up the small town was nothing more than remote, uninhabited land prior to the railway’s introduction. “There was no town before they came. It was just a goat pasture. The railroad built the town. They built all the houses, and they put in a water system, and they built the train station, and they owned everything, except for the general store. And the general store took care of the 300 people that lived here after the railroad moved on. There was no way for people to go into Santa Fe to buy. I mean, people could, but it took all day to get there and all day to get back, you know, 20 miles in a horse and wagon. So, the people had to go to the general store.”

Like WAT’s other restored properties, the Legal Tender has its own unique story to tell, which speaks volumes about its place in both southwestern and American history. “It is a period piece like our other buildings, so a part of the building is adobe, a part of the building is stone, and it was added onto a couple of times over the years,” Affledt said. “It carries that whole architectural history of what it was like to build here in the 1880s to the early 1900s. But then, a secondary dining room was added on in the 1970s, and of course, the great big kitchen in the back, but they were done in period style, so it has that kind of Western frontier town motif on the façade. It’s just like a movie set, except it’s the real deal.”

In terms of retaining the Legal Tender’s authentic Western charm, Affeldt remarked, “You want to walk into that building and feel like you’re in the 1880s.” In truth, the establishment has been remarkably preserved through the centuries, with help from various owners who did their part to maintain the structure. Thus, many of the interior and exterior details are original, including the saloon’s vintage, wooden bar. “In the 1880s, most of the fancy bars were made by a company called Brunswick, and we think that this is an authentic Brunswick bar,” Affeldt said.

With the rise of road travel and the steady decline of railroads, the Legal Tender saw its mercantile days start to fade, as new business ventures began to appear on the horizon. “Over time, the railroads had a lot of trouble [during the] ‘30s, ‘40s because automobiles came out,” Latkin said. “The roads survived after the war was over, and with gasoline, they could go to Santa Fe and buy things a lot cheaper than [at] the general store.”

During World War II, the establishment operated as a restaurant and bar and consequently played a surprising role in one of the most crucial moments in American history. At this time, people making their way to a top-secret scientific enterprise in Santa Fe would stop by in Lamy and spend time at the Legal Tender.

“They were going to Los Alamos, which is what is called the Manhattan Project,” Affeldt said. “That’s where they developed the nuclear bomb during the war, and that was probably the greatest scientific project in American history. They gathered the greatest scientists from all over the world and brought them all together in Los Alamos, and they all arrived through Lamy. It’s an amazing story, and, of course, all undercover. So, they all had code words for who they were and what they were doing there. But, that’s just the typical kind of Lamy story. Everybody going to Santa Fe, at the turn of the century, through World War II, they all went through Lamy. So, of course, they all ate and drank at the Legal Tender.” 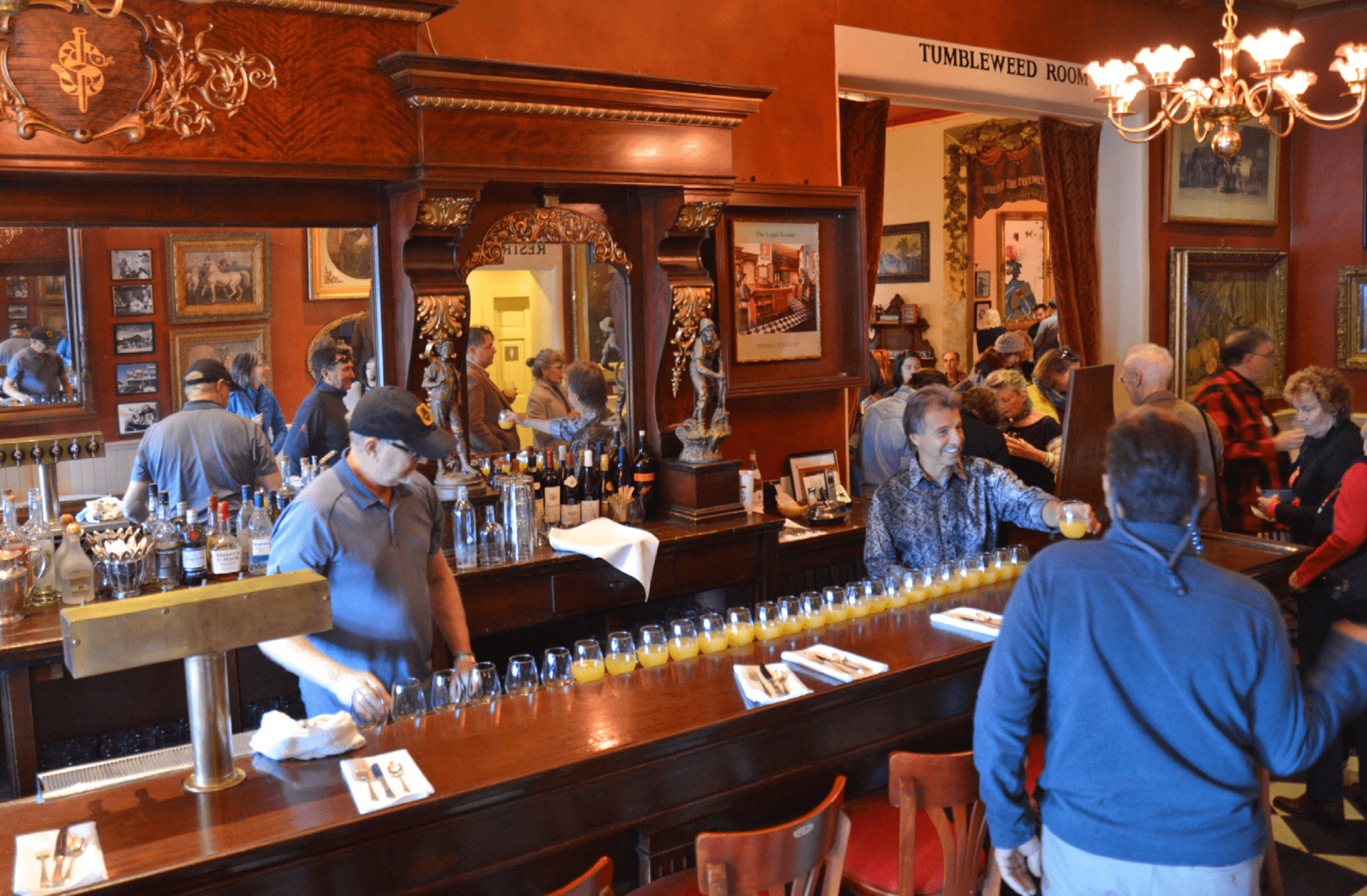 In 1952, Carolyn Yorsten restored the bar and building and named it the Pink Garter. A little more than a decade later, Robert O. Anderson of ARCO Petroleum purchased the property and gave it the name the Legal Tender. Anderson owned it until 1984, when it was sold to the Castle Creek Company and acquired a liquor license. Three years later, it was added to the National Register of Historic Places. By 1995, the building belonged to Richard Fisher and the Tumbleweed Associates, during which time extensive restoration was done to the kitchen and the building’s electricity and plumbing. It was finally donated to the Lamy Railroad and History Museum in 2006.

For WAT, preserving the Legal Tender’s history doesn’t just come down to the building it’s in. The restaurant’s entire atmosphere, from the food they serve to the music they play, is meant to immerse people in the true Old West experience. “Our directive in each of these properties is that the food has to tell a story of the place, so we want to have something kind of special and memorable and unique but [which] also lends some thought to the historical recipes, not only at the El Ortiz, but the historic recipes of this part of New Mexico. It will be a hybrid of local food and upscale continental with a definite historic nod. There’s all kinds of really cool period cocktails and stuff like that, so we’ll be doing all of that as well — local beers, local wine, things like that. We expect that we’ll have live music on a regular basis, and of course, we’ll do a lot of events there, like weddings. We’ll have a lot of cowboy Western music, [and] cowboy poetry. It’s also got a big patio and two dining rooms.”

For both historians and self-proclaimed history buffs, the Legal Tender is a must-see stop on any road trip through the southwest. Those passing through Lamy should undoubtedly visit the saloon to relish its rich history and unique beauty, while marveling at WAT’s determination and skill in bringing this antiquated treasure back to life. The West really is being re-won, one saved piece of history at a time.

Read Next
Simple Days in Pontiac, Illinois
By Efren Lopez
9 Essential Books to build Your Route 66 Library
By Staff
Take Me Out to the Ballgame
By Anna Browning
The Clown Motel
By Alex Sallas
6 Living Ghost Towns in Arizona that Deserve a Visit
By Melanee Morin
Heart of the Navajo Nation
By David Schwartz
Read Next
The Resurrection of the Meteor City Trading Post
By Katharine McLaughlin
Meet Me at the Monte V
By Melanee Morin
The Saddest Trading Post on 66
By Blue Miller
The Man behind the Voice
By Brennen Matthews
The International Car Forest
By Blue Miller
The Most Famous Ranch in the World
By Efren Lopez
Read Next
Cattlemen's Cafe - Where Cowboys Eat
By Rachel Fernandez
Gem of the Ozarks
By Hayley Bell
Here It Is
By Jim Hinckley and Lea Loeb
Friends For Life
By Nick Gerlich
A Quiet Place
By Frank Jastrzembski
Carrying on Tradition
By Cecil Stehelin