Route 66 is home to a wide variety of attractions, some historical, others picturesque, but the most memorable and fun may fall under the category of kooky and strange. Each with their own unique story, most have lived on the Mother Road for many decades, but that does not mean that there is no room for new additions to America’s Main Street. And where better to introduce a new landmark than in the city where the proclaimed father of Route 66 was laid to rest; Tulsa, Oklahoma? 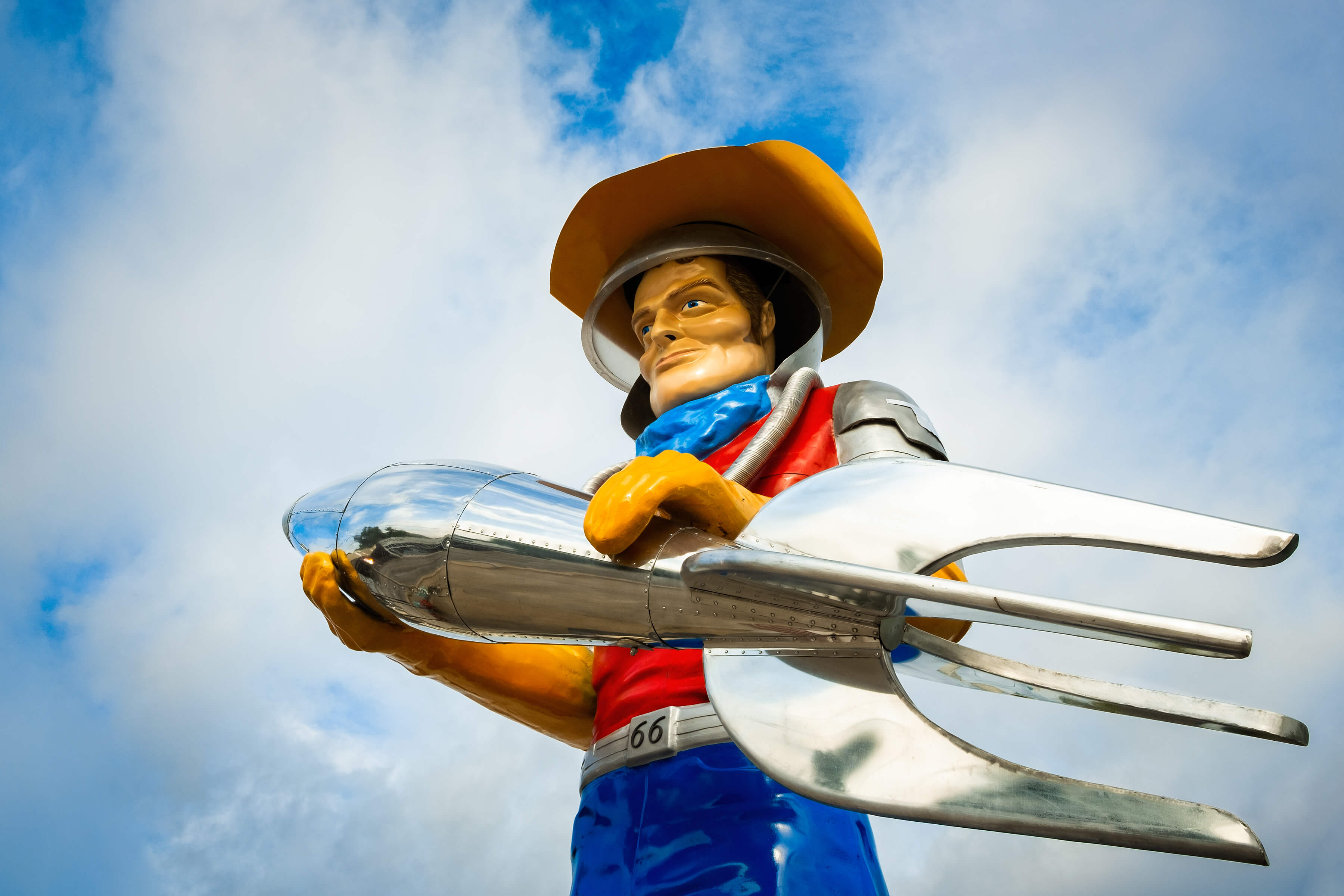 For Mary Beth Babcock, owner of the Buck Atom’s Cosmic Curios Shop in Tulsa, timing could not be better. While in search of her next big adventure, an old PEMCO gas station went up for sale, right on the Route. Taking into consideration Oklahoma’s newfound investment in all things Route 66, Babcock thought that it was the perfect time for a new Route 66 gift shop that is located only a stone’s throw away from the famous neon Meadow Gold sign. It just made sense. But how could she really make her shop stand out and bring attention to the city and the road?

As the stars aligned, longtime friend of Babcock and recently elected President of the Oklahoma Route 66 Association, Rhys Martin, introduced her to the work being done by Joel Baker of American Giants, a company that locates old Muffler Men and restores them to their former glory. Guardians of the Mother Road, Muffler Men have become an emotive symbol for travelers and a reminder of nostalgic Americana. After watching one of Baker’s videos, Babcock was hooked: “As soon as I watched that, that was it. I said, ‘I’m going to make this happen.’” And so she did. Babcock reached out to Baker and shared her dream of having her own roadside attraction. With few Giants actually still remaining on the historic route, the new addition had some hurdles to jump over for his spot to be secured.

Unlike others before him, Buck Atom, Space Cowboy, doesn’t fit into the traditional categories that tend to define each man: Cowboy, Indian, Lumberjack, he was creating his own definition of what a Muffler Man could be. The closest Giant may be the beloved Gemini Giant, an astronaut who rests peacefully beside the restored Launching Pad Drive-In, in Wilmington, Illinois. Originally, the team had set out to use a pre-existing Phillips 66 Muffler Man to create the new Buck. Following lengthy discussions, it was realized that Buck deserved to be born anew, due to his unusual accessories that were necessary in qualifying him as a Space Cowboy. Buck would indeed be one of a kind. The new additions brought challenges of their own, requiring multiple accessories to set him apart, including a jet pack, space helmet, and a cowboy hat. Equipped with his own spaceship, built by the metal sculptor Chris Wollard, he was almost ready to lift off.

Baker then introduced Babcock to Mark Cline, an artist in Virginia who specializes in fiberglass structures and would be responsible for the creation of this new Muffler Man. After sending her shop’s mascot off to Cline, Babcock soon received an impressive sketch of her very own Muffler Man. “I was just blown away,” exclaimed Babcock. “I’ve dreamed, probably for 10 years, of having a roadside attraction.”

The prospect of Buck being built was an exciting one, which prompted Babcock to find original methods to obtain funding for her fiberglass man. She did this by selling commemorative bricks to be installed near Buck, creating signed collector’s statues by artist Scott Farmer, hosting various fundraisers, and launching a GoFundMe. “I am eternally grateful to every individual who contributed to help bring Buck Atom Space Cowboy alive,” said Babcock. 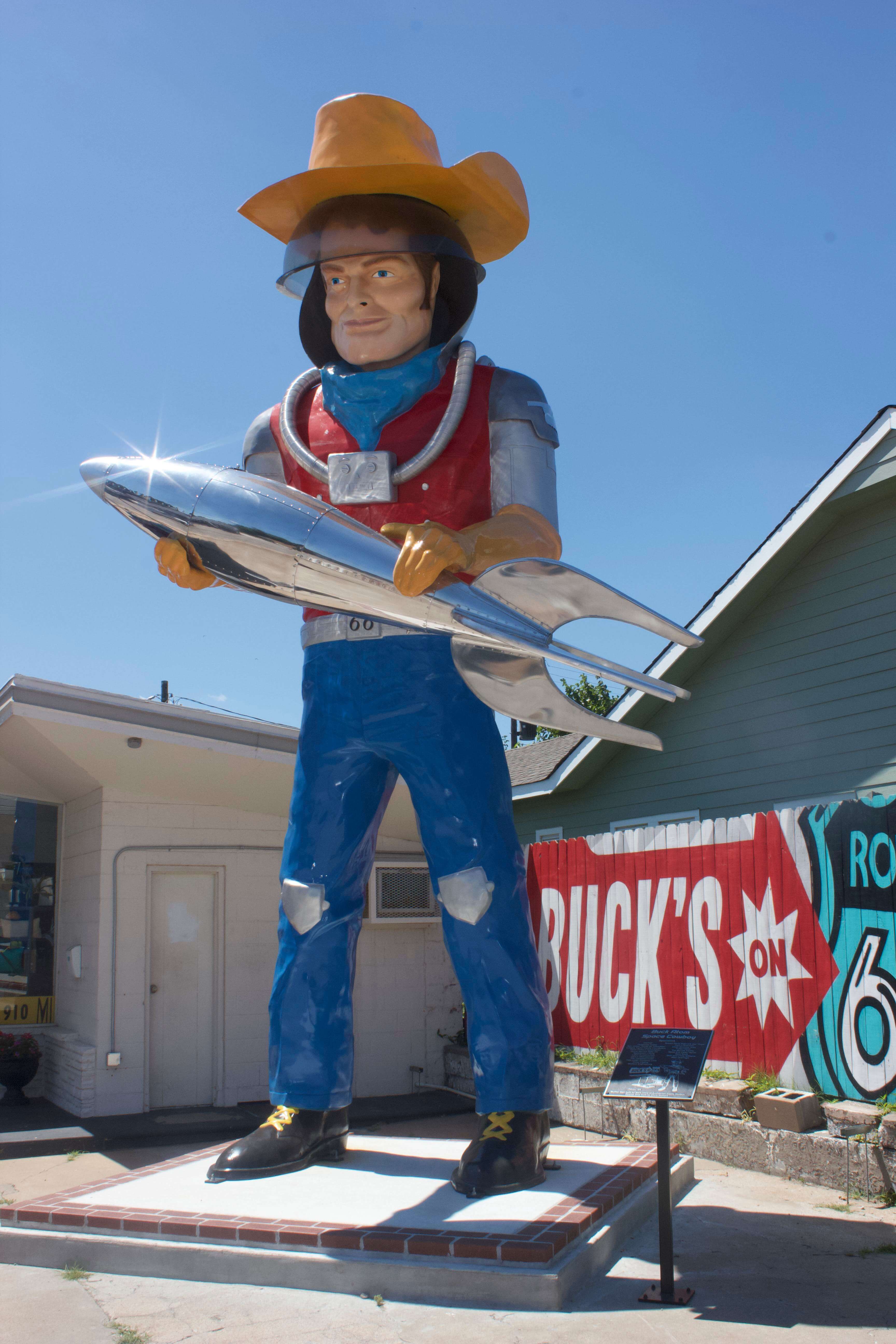 Standing tall at 20-feet, this new Muffler Man combines the classic Americana of Route 66, with his cowboy likeness and the portrait of an adventurous astronaut.

Taking a look back on the creation of Buck, Babcock notes, “I hope that this guy can provide a little relief, a little smile to people as they’re traveling the Route or those who just live here in Tulsa, and I also hope that he helps stimulate the rest of the Route, the businesses on the Route, and the city of Tulsa.”

Buck Atom’s is sure to satisfy Mother Road travelers for years to come. Really, who doesn’t feel a bit of awe standing beside a Giant?