Images courtesy of Daniel Lutzick of the Winslow Arts Trust.

With its subtle color palette of soft, natural grays, black, white and Ganado red, and featuring traditional Navajo symbols and patterns, the Hubbell Rug is remarkable to behold. At 22 feet by 32 feet in size, and weighing in excess of 250 pounds, this gigantic specimen of the 1930s gives a rare glimpse into authentic Native American weaving. The Hubbell Rug is the world’s largest single loom Navajo textile in existence. 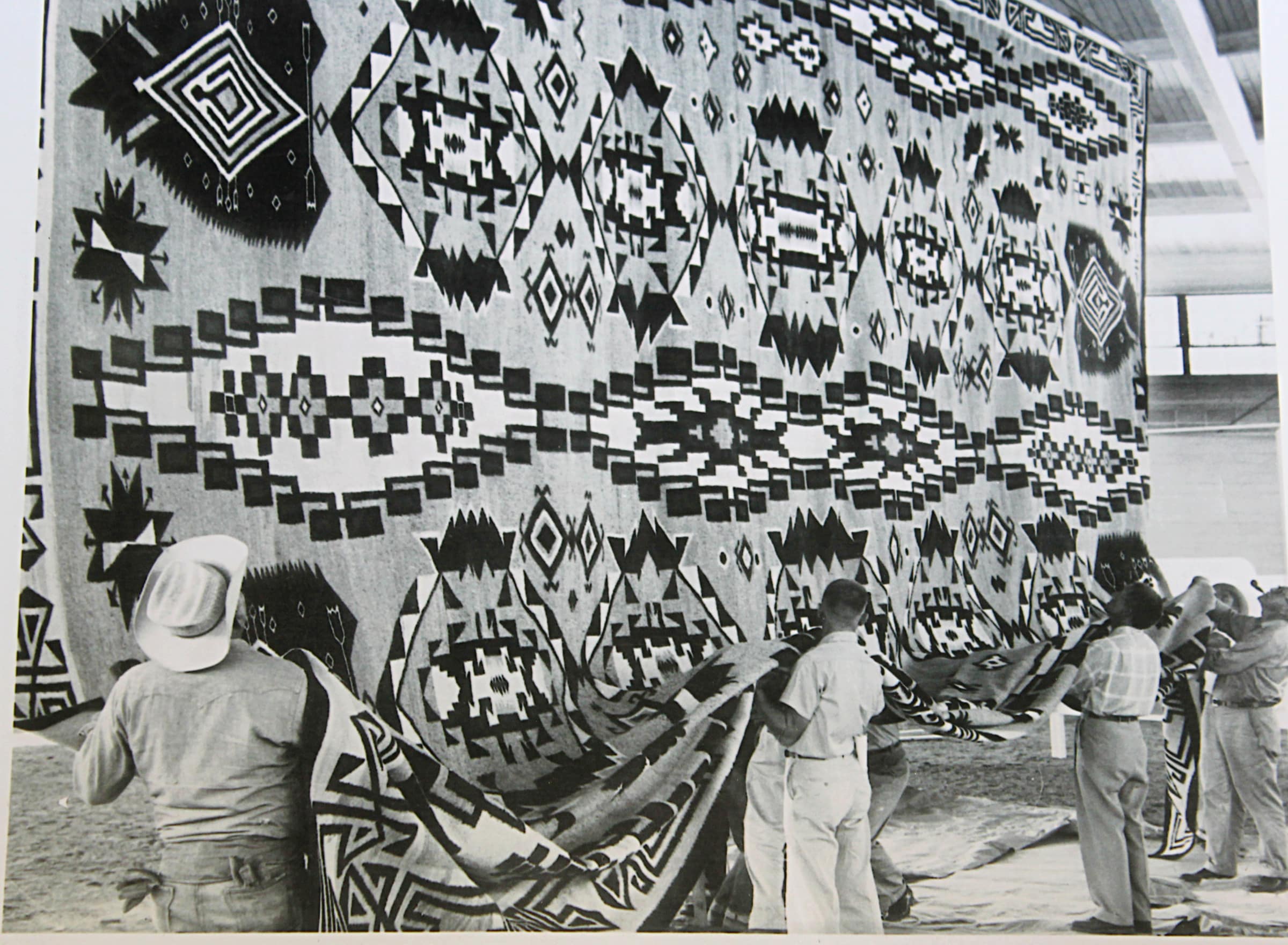 The rug being displayed in an indoor roping arena at a county fair in New Mexico, circa 1950.

John Lorenzo (J.L.) Hubbell became the best-known trader in the southwest, and for good reason. Entrepreneurial by nature, Hubbell was also an “outside of the box” thinker and promoter. He spearheaded a movement that led to his unique Ganado- style Navajo weavings, which were based on well-researched authentic Navajo designs; he urged Navajo weavers to incorporate them into very large rugs. Hubbell’s ideas proved to be highly marketable.

As his son Lorenzo took over the reins of the Hubbell Enterprises upon J.L.’s death in 1930, he set into motion a project of literal monumental proportions. Lorenzo commissioned the Hubbell Rug in 1932 and chose well- known Navajo weaving artist Julia Joe to design and craft the world’s largest Navajo rug as a tribute to Native American weavers and as a southwest craft item.

In the opinion of Dr. Jennifer McLerran from Northern Arizona University, “The rug was used to advertise the family’s enterprises. The spectacular nature of it was used to draw people in and generate interest in the Hubbell businesses in general and Navajo weavings in particular. [Lorenzo’s] goal was to commission the creation of the largest known Navajo weaving to date. He [knew] of other large pieces and wanted the rug to exceed them in size.” 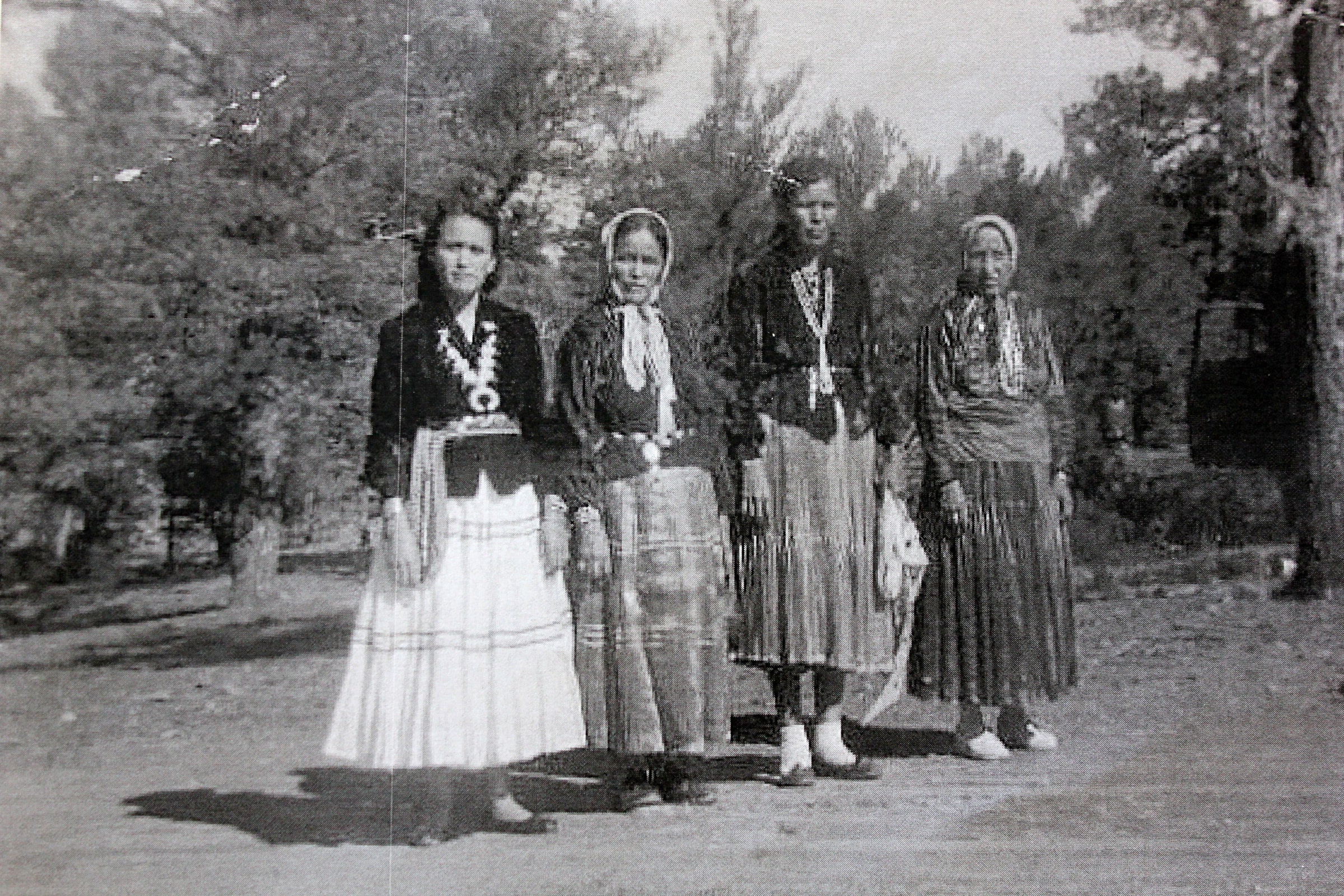 Possibly Julia Joe (second from left) and her two daughters.

Completed in 1937, and massive in stature, the rug has been displayed in a variety of settings but has been stored much of the time due to the difficulty of finding a venue large enough to accommodate it. Lorenzo and his brother Roman capitalized on their associations with the railroads and the Harvey Company enterprises, resulting in success in their own commercial marketing efforts. Using the Hubbell Rug as the tool, they exhibited it at the 1939 Gallup Inter- Tribal Indian Ceremonial, along Route 66, which included Native dancers. Until the Hubbell Enterprises and its holdings were taken over by Kevin Bales in 1949, the famous rug was displayed in New York, at ceremonial occasions, at Lorenzo’s auto dealership in Winslow, and at La Posada Hotel during its earlier heyday.

Creation of the Rug

In short order, this daunting project took on a life of its own. Julia Joe’s husband Sam built a special loom to accommodate the dimensions of the commissioned weaving, also building a 40’ x 30’ x 10’ addition to the Joe homestead in Greasewood, Arizona, to accommodate the loom and materials for the project. Lorenzo Hubbell paid all of the costs related to the weaving’s production, including construction costs, wool sent from Hubbell’s trading post in Oraibi on the Hopi reservation, dye, food for the family, and other expenses.

A project of this size and stature is a colossal undertaking and demonstrates the weavers’ tenacity and endurance. Consuming five intense years of their lives, Julia and her daughters Lilly and Erma wove seven days a week, from sunup to sundown, in order to complete the project for Hubbell. Shearing, dyeing, and carding the wool took two years, while weaving the giant textile took another three long years. As a testament to Julia’s talents, this incredible textile, with its even weave and uniform color, is truly a masterpiece.

McLerran shares details about the dyes involved in this project: “The weavers used natural (undyed) wool for the white and gray parts and natural black wool over-dyed with black synthetic (aniline) dye for the black sections. Ganado Red, a synthetic red dye color which became associated with the Hubbell’s Ganado trading post, was used for the red parts of the weaving. Two-hundred and eighty-eight envelopes of dye and the wool of seventy-eight sheep (18 black and 60 white) were used to produce the weaving.

The limited palette of the rug reflects Lorenzo Hubbell’s influence. The white and grays in the piece are all natural. The varied shades of gray were derived from the meticulous carding together of black and white wool, while the blacks consisted of natural black wool overdyed with synthetic black. Judicious employment of color is seen in the sparing use of Ganado Red.”

Using the correct recipe for uniquely saturated colors became almost a scientific, yet artistic process. Mary Walker, Textile Conservator and owner of Weaving in Beauty, explains the special nature of the Ganado Red color that the Hubbells became famous for: “The Hubbells were noted for insisting that the red colors the weavers used were dark and very saturated. In part, this was because they did a lot of business with the Fred Harvey Company, who wouldn’t buy rugs with badly dyed wool. Other traders were not so fussy, and weavers would sometimes dye three or four pounds of wool with an envelope of Putnam’s Perfection Dye, which was intended to dye one pound only.”

Acquisition of the Rug

How a massive 22 feet x 32 feet rug ended up in the trunk of a car parked in Flagstaff is quite the mystery; how it remained in great condition under those circumstances is quite the miracle. When Kevin Bales took over the Hubbell estate around 1949, he acquired the Hubbell Rug quite by accident. One can surmise that, because of the rug’s size and weight, he chose to store it in the car trunk until he could conceive of a use for it. After all, he was running a formerly successful enterprise; Bales himself continued managing the businesses for close to 30 years.

Allan Affeldt, owner of La Posada Hotel, stayed in contact with and persistently pursued Bales’ daughter Patricia Kinsolving, eventually convincing her in May 2012 to sell him the rug. Affeldt quickly made plans for the rug’s inspection, maintenance, and eventual display. The historic Navajo weaving was donated to the Winslow Arts Trust, a non-profit formed in 2010 by Affeldt and his artist wife Tina Mion and friend and colleague Daniel Lutzick, to promote the history and culture of Winslow. Affeldt explains: “We formed WAT as a legacy vehicle, as the primary beneficiary of our estate, and to oversee the large collections of art at all of our properties, La Posada Hotel in Winslow, La Casteñada and The Plaza Hotels in Las Vegas, New Mexico, and Legal Tender Saloon in Lamy, New Mexico.”

Difficult to transport and display due to its size and weight, Affeldt saw an opportunity to utilize the space afforded by a Mary Colter-designed railroad station, which took five years to renovate. Truly a work of passion, the historic Winslow depot is attached to La Posada and now houses the Route 66 Art Museum.

Analysis and Plan for Care

In February 2019, Walker and her team visually analyzed the rug on their hands and knees, dividing it into 49 sections so they can be tracked for issues going forward. Walker says of the rug’s condition: “The rug is in very good used condition. The design is intact, there are no open holes, and there is no insect damage. There is some fugitive dye in a couple of places. There are some stains that probably occurred when the rug was exhibited. There are two breaks in the side cords that the Winslow Arts Trust has authorized us to splice. There is an unprofessionally repaired hole, but we are leaving that as it is because it is part of the rug’s history, and because it does not threaten the rug’s integrity.” 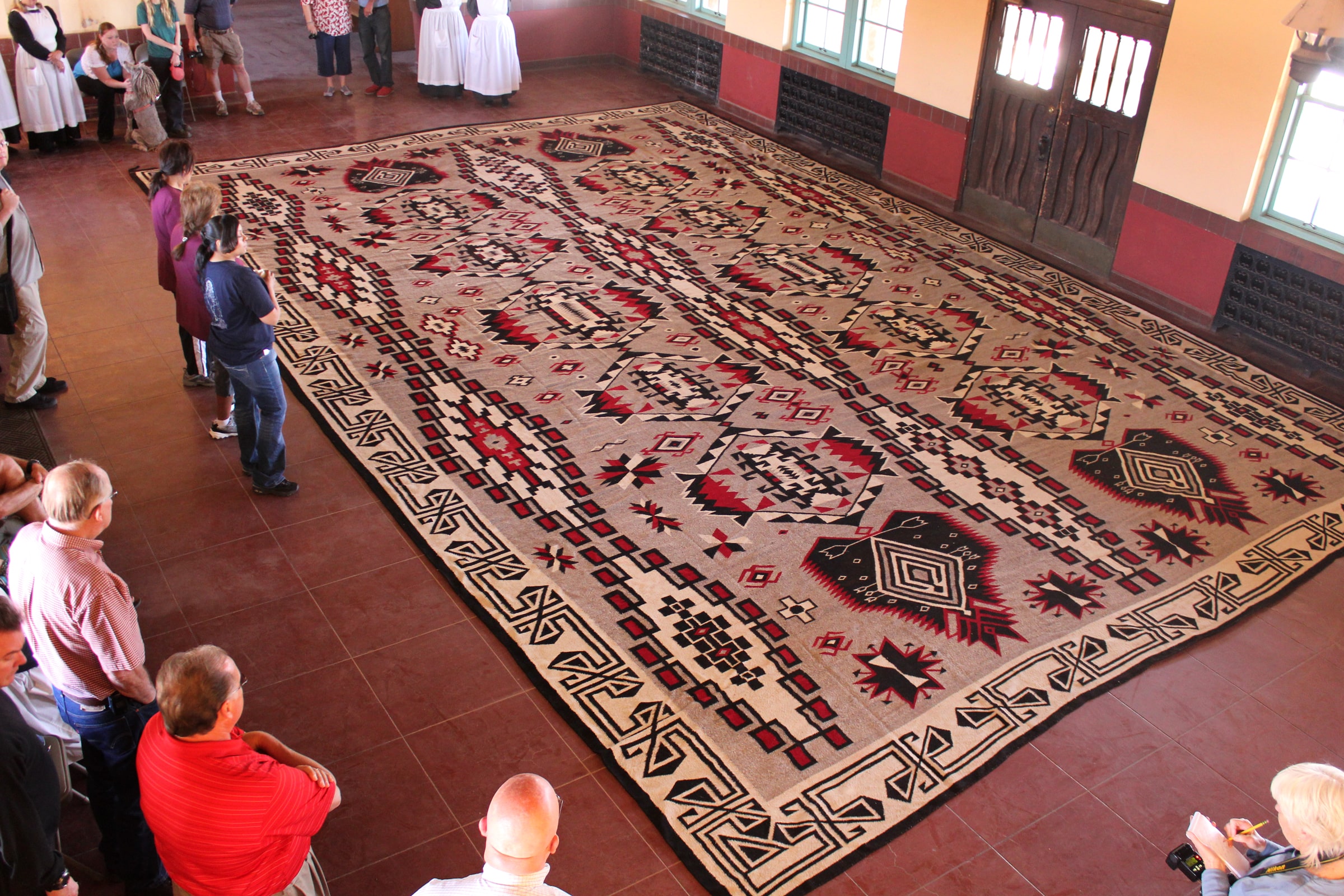 The rug on display in the original passenger waiting room of the 1930 La Posada train depot
which is now part of the Winslow Arts Trust Museum. 2012.

Going forward, Walker’s recommendation to the WAT includes some repairs, a plan for regular vacuuming and cleaning, and a plan for rotating the rug while displayed. Regular freezing in Northern Arizona University’s freezers helps control moth infestations and further preserve the rug’s integrity.

“I’m recommending that the rug be displayed flat on a platform about three and a half feet above the floor. It will be surrounded by interpretive materials, which will allow visitors to appreciate the scale of the rug while reducing the risks of direct contact. It also provides the best support for the rug, which the museum plans to have on permanent display.”

Now the showpiece of the new Route 66 Art Museum at the La Posada Hotel in Winslow, the Hubbell Rug will be cared for and displayed for the public’s enjoyment right where it was created and originally displayed some 50 years ago. It is an impressive sight to behold.