The Mystery of Shipshewana

In today’s hectic, busy world, where we are inundated with emails and phone calls, text messages, Facebook messages, FaceTime requests and a myriad of other stimuli, it is hard to take a break and simply check out, even on a road trip. But when life has worn you down and you decide to hit the open road, especially when that road is Route 66 and you are on your way, heading west to the Windy City, where The Mother Road traditionally begins, there is a gem of a stopover that welcomes everyone. 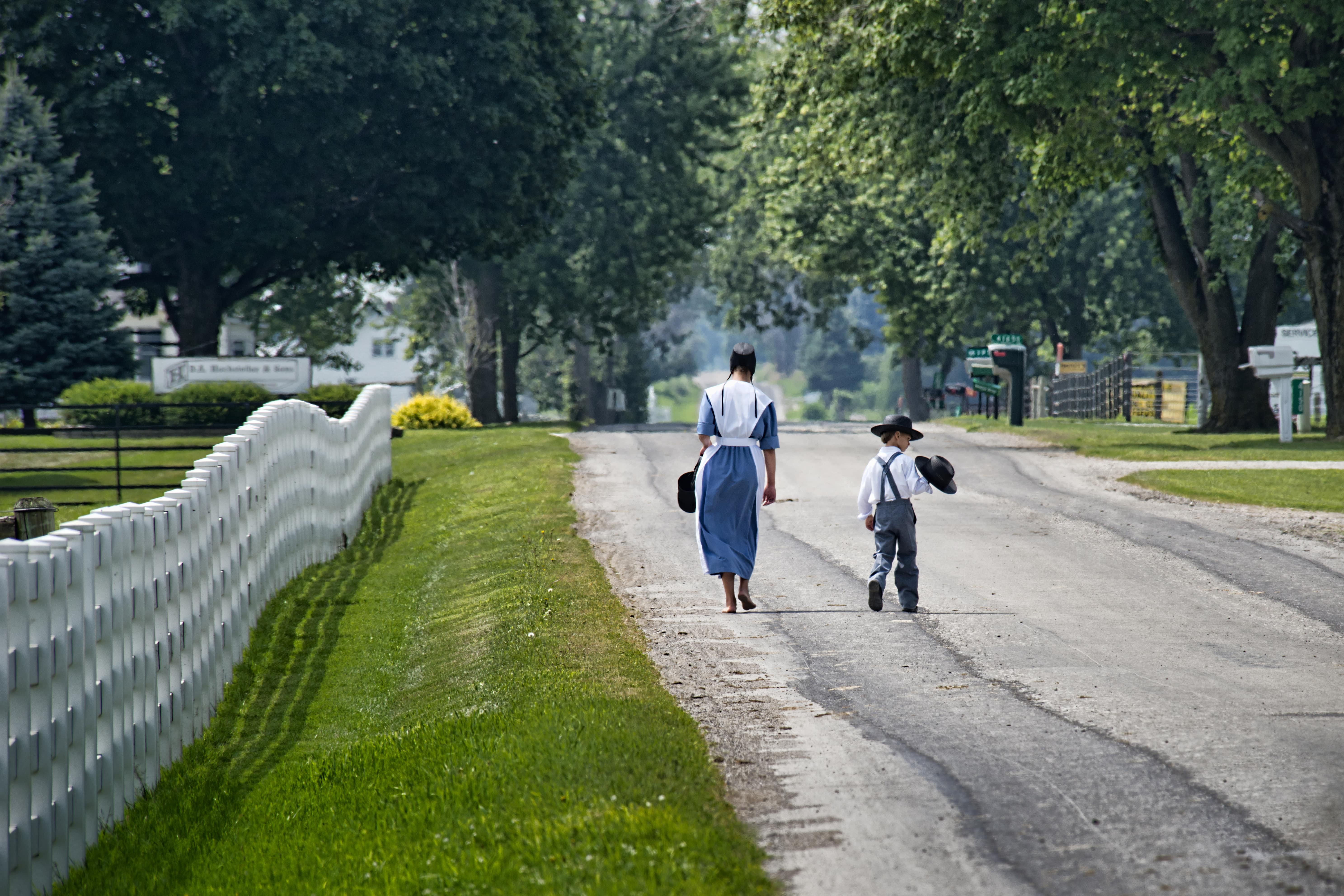 Located a little over two hours from Chicago and nestled in the picturesque countryside of Indiana, Shipshewana – named after a Potawatomi Indian Chief – Chief Shipshewana – is a delightful surprise that few are expecting. It is that quintessential middle American place with a hometown feel and a genuine warmth that is increasingly difficult to find when beating your way down the road.

When first arriving in Shipshewana, or Shipshe, as the locals call it, visitors are often unexpectedly transported back in time, as they find themselves sharing the road with horse and buggy, and face-to-face with a settlement that feels less like 2018 and more like a 1620 New England town. “The first thing we seen was an older lady dressed in a bonnet, with thick glasses, speeding toward us in a buggy being pulled by a huge brown horse. It was a surreal sight to see, and the clippity clop, clippity clop sound of the horse hooves on the tarmac really accentuated the vivid scene. Behind her were dozens of other Amish women and men, each hauling tail for somewhere. They were in open buggies, closed buggies, complete with blinkers and tail lights, and driving flimsy looking bicycles.” Travel writer Brandon Turner’s experience describes a regular day on the streets of Shipshewana.

The town is less than two square miles and has around 692 citizens, yet happens to be the third largest Amish community outside of Ohio and Lancaster. For many, the Amish are a mystery, a tourist attraction even. But in fact, they are neither. This deeply religious group believes that most of the modern conveniences that we hold so dear, are actually a hindrance, to them progress does not always mean something superior. They are simply likeminded people of faith who are seeking to live a more simple, modest, less crowded life. They dress differently - women in plain blue dresses and bonnets and men in dark- colored suits with wide-brimmed hats and characteristic long beards - drive buggies instead of cars, and many continue to make a living off the land.

What is truly mesmerizing about this Amish community though, is that the last published amount of income from tourism that was earned in Shipshewana was $137.2 million. According to Andy Rohrer, Vice President of Sales and Marketing for Shipshewana’s hugely popular Blue Gate Garden Inn, the town sees anywhere between 1.5-1.6 million visitors per year. But what draws so many people to Shipshewana?

“Well, the number one attraction is obviously that we’re in Amish country, and when people visit Amish country, it’s just a way to visit a different culture without going too far from your home. For a lot of people, especially [from] the big cities, going to a place like Shipshewana is very culturally different. People always comment to us that the pace just feels slower, they just feel more comfortable here and it’s almost a world away.” And a world away it truly is.

Though most of the establishments, like the attractive Blue Gate Garden Inn, have modern conveniences to make the vast number of travelers that pass through comfortable, the people themselves do not generally live with many of these contemporary touches at home. But that does not seem to impact how they cheerfully embrace local tourism.

The Blue Gate is not only an inn, but also a restaurant, theater and gift shop. They offer genuine Amish tours where they employ, at the height of their season, nearly 450 employees, who are mostly Amish. They may work in a business that uses electricity, telephones, and have a state-of-the-art theater that runs around 300 shows a year, including the likes of Kenny Rogers and Josh Turner, but they don’t feel that it compromises their beliefs. “In our area the Amish embrace visitors. Many operate home businesses and welcome tourists; however, we stress that visitors respect [Amish] culture and refrain from asking to take photographs. Many businesses operate on a cash basis and all Amish and many “English” owned businesses are closed on Sundays and religious holidays. In the town of Shipshewana – most businesses close around 5 or 6pm during the week so that the owners may spend time with their families in the evening,” says Beth Thornburg, Vice President of the Lagrange County Convention and Visitors Bureau.

Being such a small town, you wouldn’t possibly think that there could be much to do, but what they lack in size, they make up for with charm and more simple activities. Shipshewana boasts the largest flea market in the Midwest, which is a major draw for visitors. “The flea market has over 1000 vendors. We’ve got something for everybody: everything from fresh produce to antiques to socks and perfume, and during the week, there are several different big auctions, antique auctions, big animal auctions... just a lot of fun cultural things that people can take in. Obviously, we do the back roads tours, those are fantastic if someone really wants to experience the Amish community. We get them outside of town, we go inside Amish businesses and homes,” explains Andy.

If antiquing isn’t your cup of tea, they also have a beautiful bike trail, the Pumpkinvine Nature and Bike Trail that connects Shipshewana to Middlebury. “It is gorgeous and it’s flat, so even inexperienced bike riders can enjoy it. It’s not hard, it’s just really a lot of fun.” For car enthusiasts, the Hostetler Hudson Auto Museum, a simple venue that holds the world’s largest collection of classic Hudson automobiles, is a definite draw. And the food at The Blue Gate Restaurant is so good, with hearty homemade Amish delights, that the venue literally brings visitors in by the busload.

But perhaps above all of the quaint things to do, Shipshewana’s nostalgic energy and traditional, simplistic environment is what really draws people who are looking for something a little out of their modern-day norm. “I think a lot of people like to drive out to the Amish countryside. It’s just little farms dotted throughout the countryside, and you just never know what you're gonna come across. The animals, the cows and little colts and foals in the field, and then the beautiful gardens... that’s something that a lot of people comment about, how clean and tidy these farms look, and the flowers, a lot of people love the flowers and stuff like that,” add Laurie Scherk, Director for the Shipshewana Retail Merchants Association.

And after a busy day of sightseeing, shopping and chatting with locals, if all you want to do is sit back and watch the world go by, literally, Turner’s experience may offer the description that you are looking for as you consider your trip to Shipshewana: “Being a dry town, we grabbed some soda from the only open store – almost everything closes in Shipshewana on a Sunday – and sat outside of our hotel on a picnic table, enjoying the end of the day. There was a calm, serene feeling as a huge sun began to set. Suddenly, we began to hear the clip clop, clip clop of the horse hooves and buggies in the distance, even before they came into sight. It was surreal sitting there, waiting for them to come into view. We watched as a family of four - mom and dad up front and two little ones in the back - galloped past, the father holding the reigns tightly, turning in our direction to offer a slight nod. For the most part they paid no mind to us, but as they drifted beyond the hotel, a little boy curiously peered from the tiny window and shyly waved hello. It was a special moment.”