A Moment in Route 66’s History

Just below the pavement along Route 66 near Santa Fe, New Mexico, lies the battleground of one of the most important and decisive encounters of the American Civil War: the Battle of Glorieta Pass (March 26-28, 1862). What at first appeared to be a Confederate victory ended up being a decisive triumph for the Union, accomplished through bravery, cunning, and sheer blind luck. 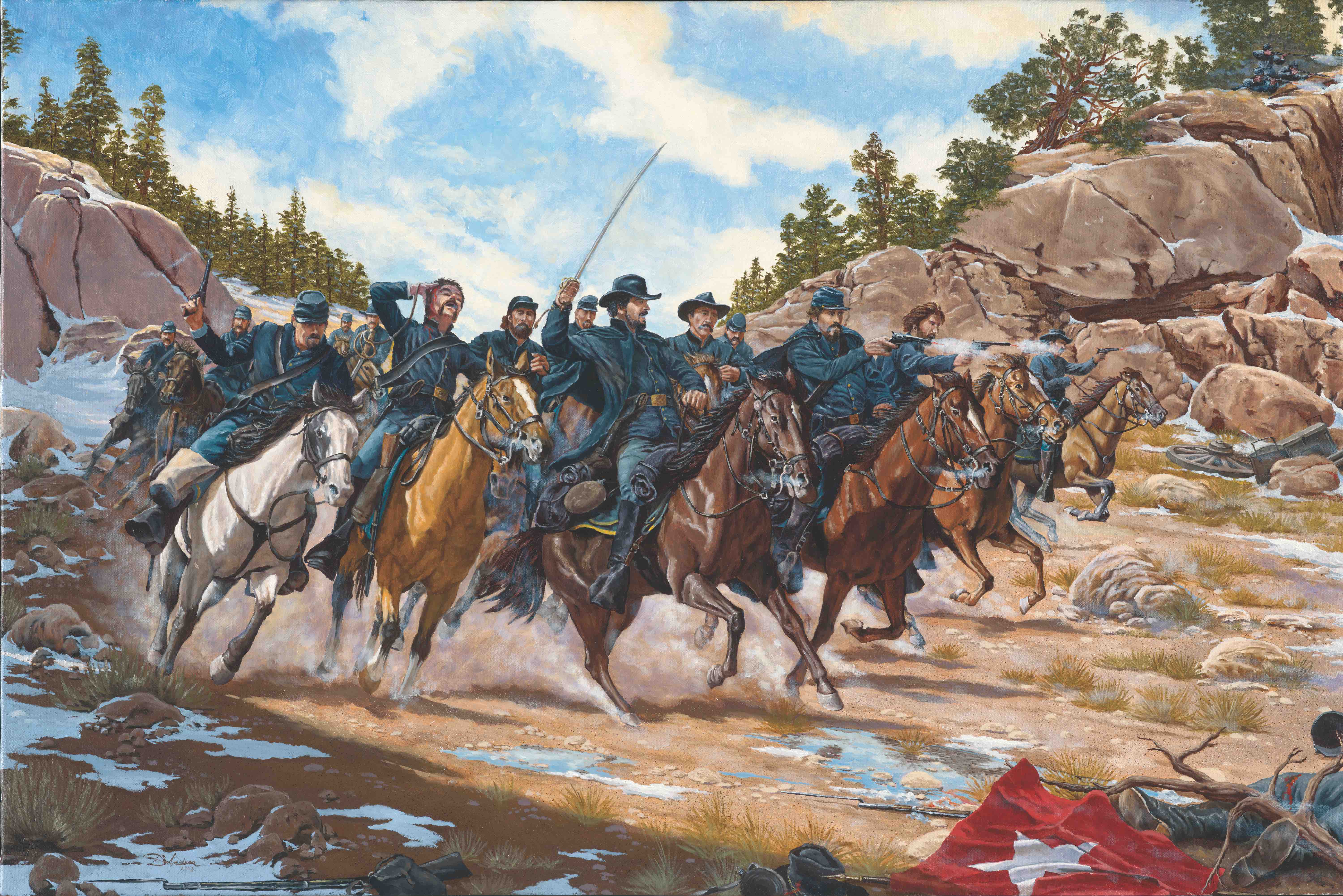 Sixty-four years before the creation of Route 66 and the countrywide unification it would bring, America was embroiled in a violent civil war over the most essential of issues: individual human rights and freedoms. The fate of America was also at hand; would the United States be a dissolvable confederation of sovereign states or unite as an indivisible nation with a national government. Without the success of the North, divisive issues like slavery would have continued to fracture the nation, and a unifying vision like Route 66 might have never been possible.

We have all heard of the great battles at Shiloh, Gettysburg, and Antietam, with their tens of thousands of casualties and large political implications. However, two weeks before the Battle of Shiloh, Confederate and Union soldiers faced off in another key battle in New Mexico. The Battle of Glorieta Pass may have been smaller and less known, but it was, in fact, the key battle of the Civil War’s westernmost campaign.

The day was March 26, 1862, and the Confederate Government wanted to enforce its claim to the Confederate Arizona Territory with support from local secessionists, and capture New Mexico. The cash-strapped Confederacy also wanted to use the lucrative Western mines to fill their treasury. General Henry H. Sibley had already captured Sante Fe and Albuquerque, and next wanted to control the essential Santa Fe Trail. Spanish settlers at Santa Fe originally created the trail in 1792, heading northeast through the Sangre de Cristo Mountains to link with the French trading posts in Louisiana (a route similar to the one Route 66 would take over a century later). Sibley wanted to control these important mountain passes, so he assigned his fellow Confederates in the area to take Glorieta Pass (situated at the southern tip of the Sangre de Cristo Mountains) - this group consisted of a few hundred volunteers from Texas, commanded by Major Charles L. Pyron.

Pyron’s force of 200-300 soldiers faced off against a 400-strong Union encampment at the pass. The Union soldiers were able to fend off Pyron’s advances, and eventually, Pyron retreated to regroup. Both sides called for reinforcements the following day; Lt. Col. William R. Scurry’s troops swelled the Rebel ranks to about 1,100, while Union Col. John P. Slough arrived with about 900 men.

Both leaders decided to attack early the following day, and Slough had engaged Scurry’s battle line in the canyon before 11:00 a.m. on March 28th. Scurry’s Confederate troops overwhelmed Slough’s forces and they retreated to the adobe buildings of Pigeon’s Ranch, a stagecoach stop on the Sante Fe Trail. After more than six hours of fighting, the Confederates were clearly winning, but nightfall halted their advance. Scurry considered the battle already won, but the Union forces had a trick, and a bit of luck, up their sleeve.

Slough had sent a group of his men led by Major Chivington westwards toward Santa Fe, hoping to make a surprise flank attack, but instead, Chivington discovered the Confederate army’s supply train. Chivington and his men burned the Rebel’s supplies, destroying their food, ammunition, and animals. Having no supplies, Scurry and his Confederate forces were forced to retreat, first to Santa Fe and eventually to San Antonio, Texas. This decisive battle stopped further incursions into the Southwest and was the turning point of the war in the New Mexico Territory.

The significance of the Glorieta Pass Battle, commonly referred to as the “Gettysburg of the West,” was recognized as one of the most important battles of the Civil War by the government’s Civil War Sites Advisory Commission in 1993. Of the approximate 10,500 actions of the war, only 11 battles, including that of Glorieta Pass, were labeled as priority I (class A) for their direct impact on the course of the war and the importance of their preservation.

When Route 66 was originally laid out in New Mexico in 1926, it passed directly over the Glorieta Pass Battleground on its way to Santa Fe (it was later realigned in 1937 further to the south, bypassing Glorieta Pass and Santa Fe completely). Today, there are numerous remnants of this important battle along the old track of Route 66. One mile south of the village of Glorieta, you’ll find the Historical Marker of the battle along the south side of the route. Half a mile further east of this marker you will find the remains of Pigeon Ranch - the old Santa Fe Trail coach house, and where Slough’s overwhelmed Union forces retreated to.

Nearby, is the Pecos National Historical Park, a gorgeous natural park set in the woodlands of the Sangre de Cristo Mountains. Here, you’ll discover the remains of Indian pueblos, learn about past Spanish encounters in the area, and experience the history of America’s Civil War - they even hold an annual Civil War Encampment on the anniversary of the Battle of Glorieta’s Pass with live demonstrations.

Route 66 is known for its colorful and fascinating history, but the ground beneath the pavement has a history as old as America itself. With the Battle of Glorieta’s Pass, we see the fascinating overlap of centuries of history: the Spanish Santa Fe Trail that parallels the cross-country transit of Route 66, the key battle that prevented the advance of Confederate forces to the southwest and helped lead to the victory that would unite the country, and the remnants of that incredible history that still lies by the roadway today, just waiting to be rediscovered.