Words and Photographs by Efren Lopez

Summer nights are often windy and cold in the high desert. The howling wind blows all around you as you try to fall asleep, and in the vastness of the open range, you can gaze high above in the night sky and observe the Milky Way in the distance. It is a reminder of just how small we are in the cosmos.

A rainbow of colors from the rising sun finally spreads a blanket of warmth over the parched landscape, as a new day brings a plethora of opportunities to capture the beauty of this place.

The realization that you are all alone in such a vast and stunning land is both frightening and satisfying. This mysterious country exists in seclusion, a ghost town that has become famous because of its name and folklore. It is a place that once was but is now no more, only alive via its dilapidated buildings and the mysterious stories that it holds. 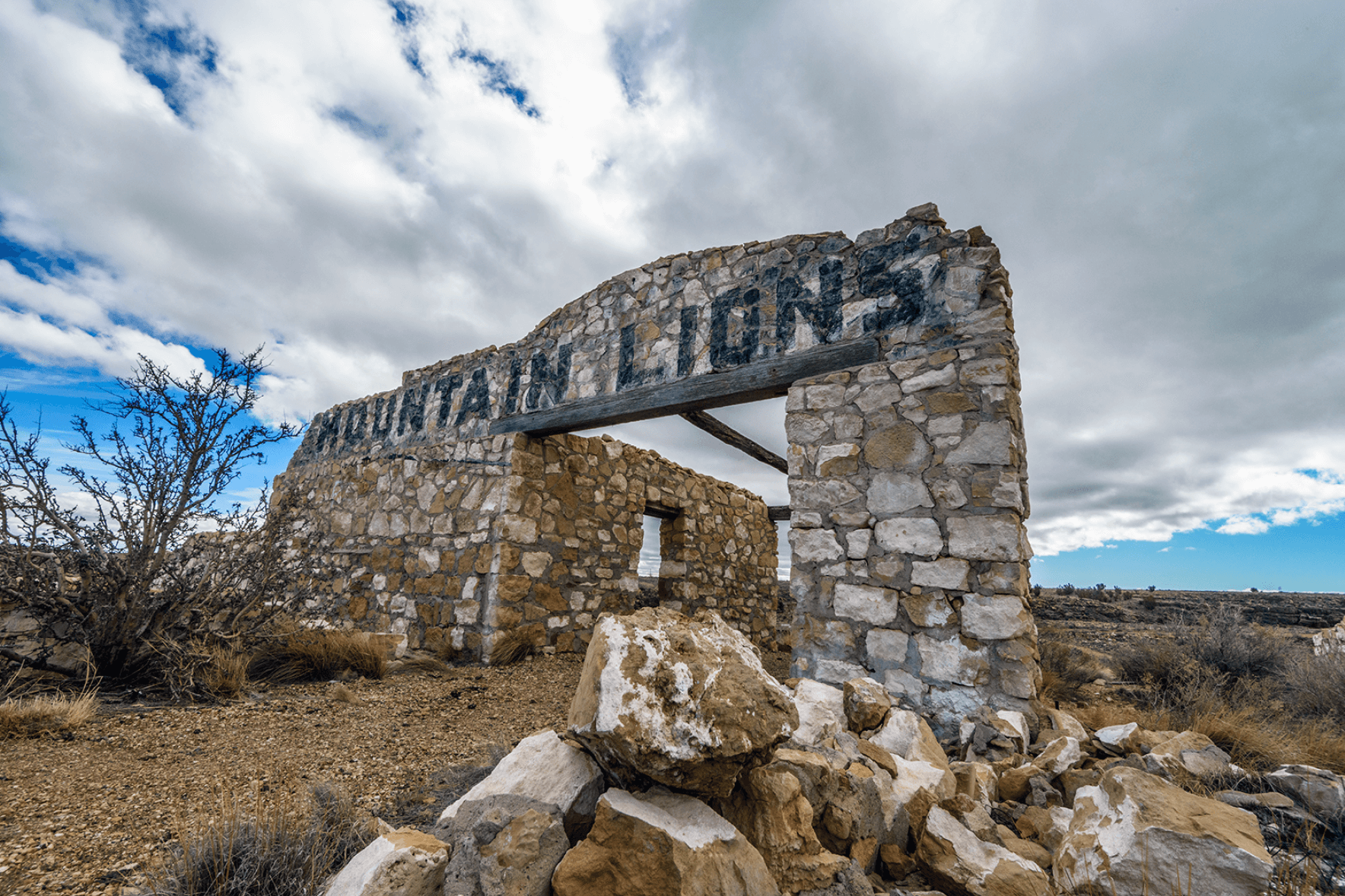 The remaining ruins and disappearing letters of a Wild West theme park where mountain lions and other desert creatures were once housed.

Two Guns, Arizona, creates an abundance of opportunities to capture your imagination.

Located only 30 miles east of Flagstaff and 24 miles west of Winslow, Arizona, Two Guns is a popular destination for both American and international visitors alike looking for a unique experience while traveling Route 66.

With its scarce vegetation, the Arizona desert is an exotic and captivating strange land, known for its extreme temperature swings. The days often begin with chilly, frosty mornings that morph into hot, dry middays, topped off with bitter cold nights. The magical grand panoramic views of the southwest, combined with the impossibly clear blue skies that seem to go on forever, create a backdrop for adventure and plenty of room to let your spirit wonder.

A shell of its former self, Two Guns is surrounded by time-worn structures that are crumbling one piece at a time. The skeletal remains of hand-crafted stone buildings remind us of the historical significance of this disappearing treasure, one of many that once attracted thousands of visitors as they motored across America and down the Mother Road. 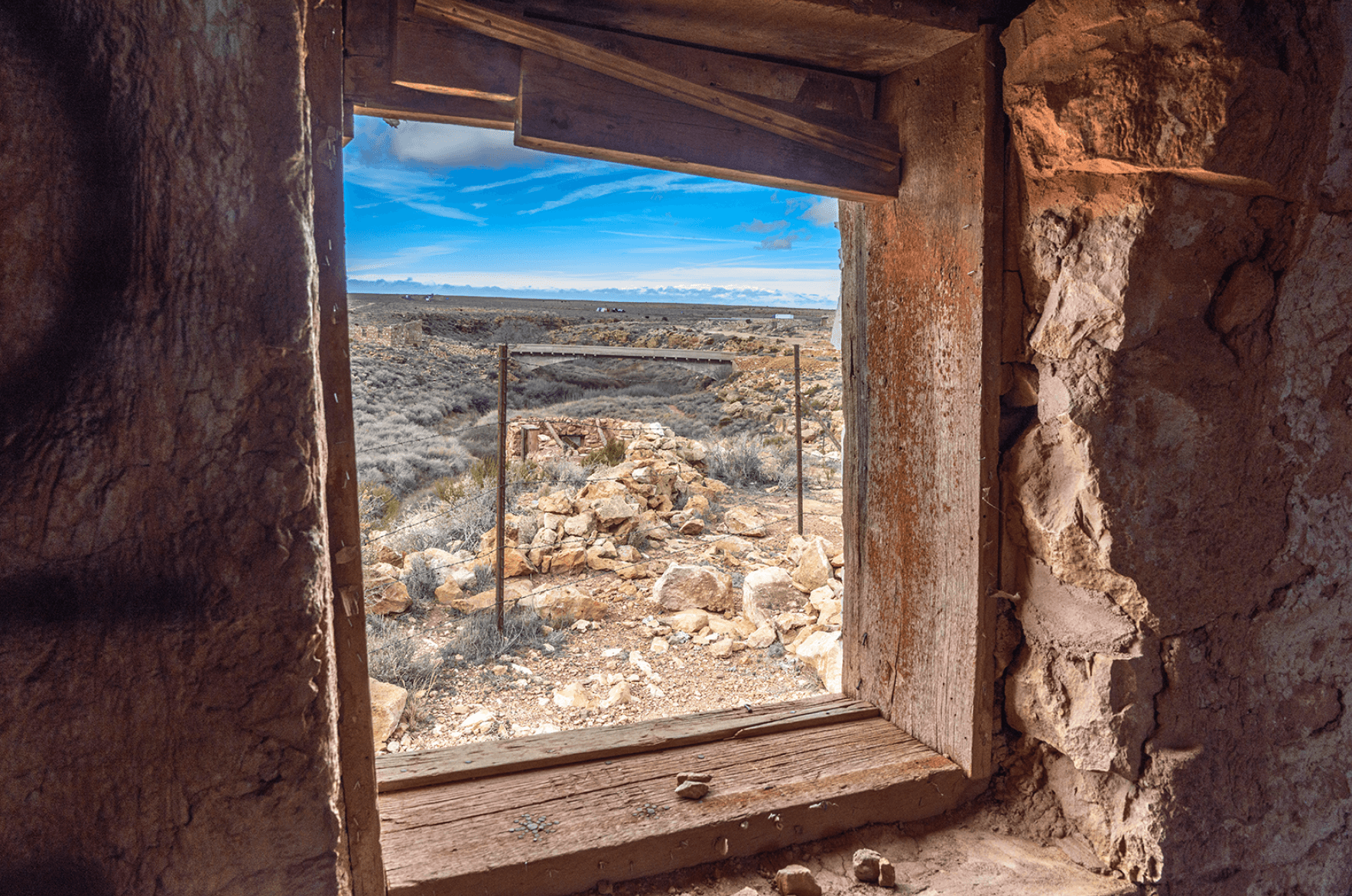 A view from inside a hand-crafted stone building lets you observe Diablo Canyon and the surrounding areas, as traffic rushes by on I-40.

As you explore the surroundings, you drive down a dry dusty road and hear the whispering winds all around you. Tumbleweeds roll across the desert landscape. There is a deep feeling of loneliness and abandonment. In the distance, you can distinguish the fading letters that once proudly read, “Mountain Lions” above the entrance wall of the crumbling ruins of a long-ago abandoned zoo that once housed mountain lions and other desert animals.

An abstract view from a forlorn gas station lets you gaze at I-40 as traveling motorists rush by. Pieces of a bathhouse frame the dilapidated KOA Campground building that looks like it’s ready to give up and collapse at any minute.

A close-up view of the still picturesque, but now deteriorating historic Canyon Diablo Bridge provides a window into the canyon and the surrounding areas. Even in its wildness, it remains a peaceful, lovely scene. Hidden from plain view, a path leads you to the spot overlooking the cliff where the Apache Death Cave is located. This mysterious place attracts curious travelers searching for a ghostly experience. As the story goes, in 1878, Apaches raided two Navajo camps located along the Little Colorado River and killed everyone except for three girls who they took captive. Discovering what had happened, 25 Navajo warriors pursued them and tracked them to a cave where they could hear voices. Soon the warriors located the mouth of the cave in a ravine, and after killing the two guards who were placed to keep watch, dropped large amounts of wood into the entrance of the cave and started a huge fire. The Apaches tried to negotiate their way out but that did not work. Then they tried to use whatever water they had to dose the fire and when that did not work, killed their horses and tried to use their blood to put the flames out. Finally, in desperation, they stacked the dead horses near to the entrance to try and keep the flames away.

In the end, they all perished and the Navajo departed. Legend has it that from that day, local tribes avoided the cave due to a deeply held belief that the area was cursed. It is a story that fits perfectly into the rocky desert landscape and the mystery of Arizona’s Route 66. 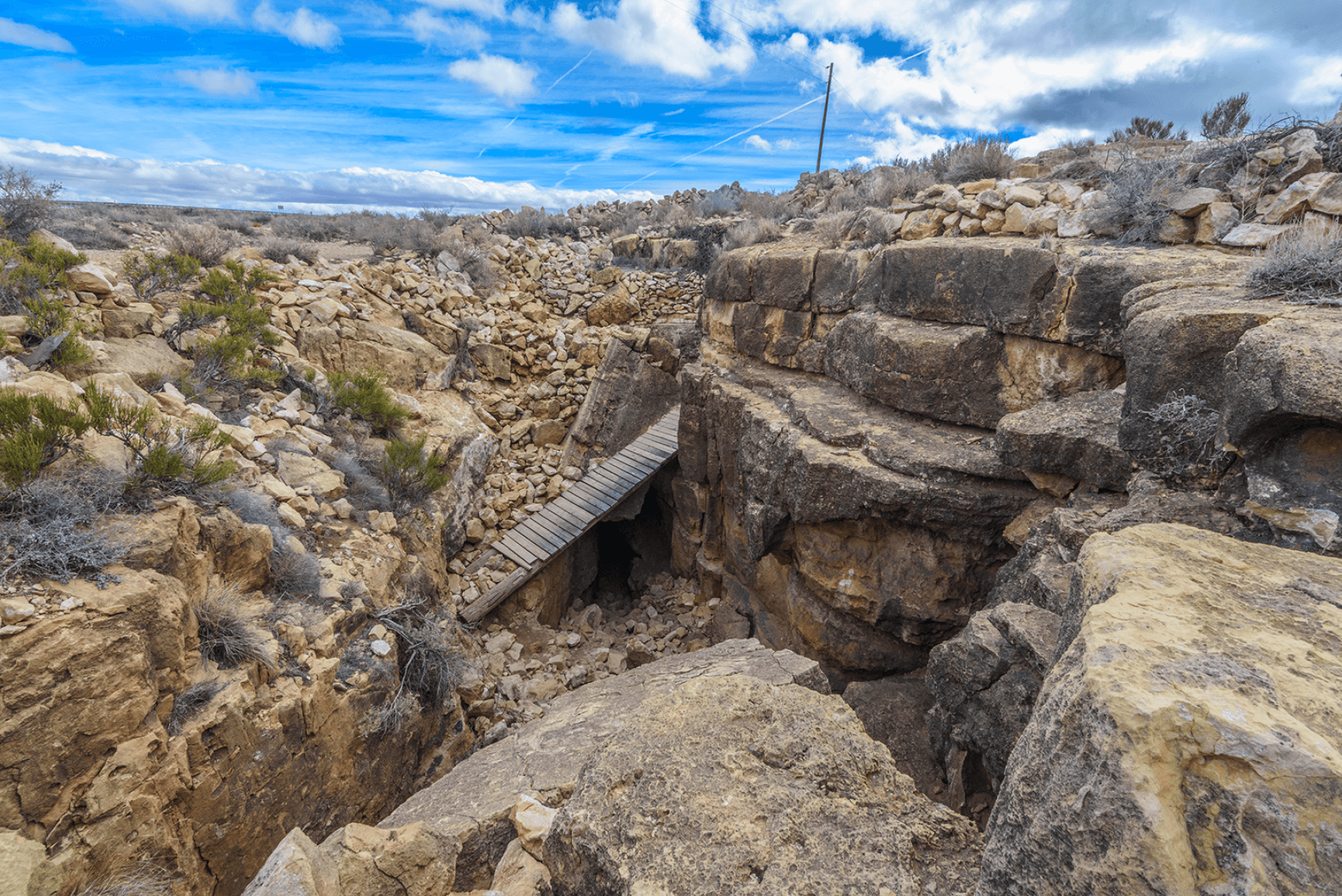 Surrounded by the majestic desert landscape, the Apache Death Cave, near Diablo Canyon, is the folklore that represents the spirit that still remains in Two Guns.

As you continue to drive on old Route 66, you will find a collection of intriguing artwork. On the wall of a small shack facing I-40, there’s a black-and-white mural depicting the Route 66 shield framed by two guns. As you continue to explore, you’ll discover traces of disappearing murals all around you. A swimming pool adorned with vibrant colors and the remnants of a central structure are all that is left of the recreational area that once was full of life.

This section of Route 66 in eastern Arizona was once home to a bevy of roadside attractions that drew visitors from across the country and world alike. Now most are gone, relics of a bygone time, when people traveled differently and marveled at simpler things. Out here in the middle of nowhere, in the vibrant, great southwest desert, you will discover a disappearing gem that still deserves a last brief visit before time steals it away forever.