Muffler Men, larger-than-life iconic statues, were once commonly used – quite successfully we must add – as advertising ploys along Route 66. Muffler Men was the popularized name for one of these giant characters clutching a car muffler. These statues — which also included cowboys, Indians, lumberjacks, spacemen, women, happy halfwits, and even pirates — were commissioned by retailers to attract the attention of motorists and patrons. In highly trafficked parts of Route 66, motels and businesses were in fierce competition to attract road-tripping families into their venues rather than their competitors, and as the Mother Road grew, so too did its marketing methods. The first statue, created by International Fiberglass, was of Paul Bunyan and was erected at a café in Flagstaff, Arizona, around 1962. In the pre-selfie days, Muffler Men created the perfect backdrop for a family photo. 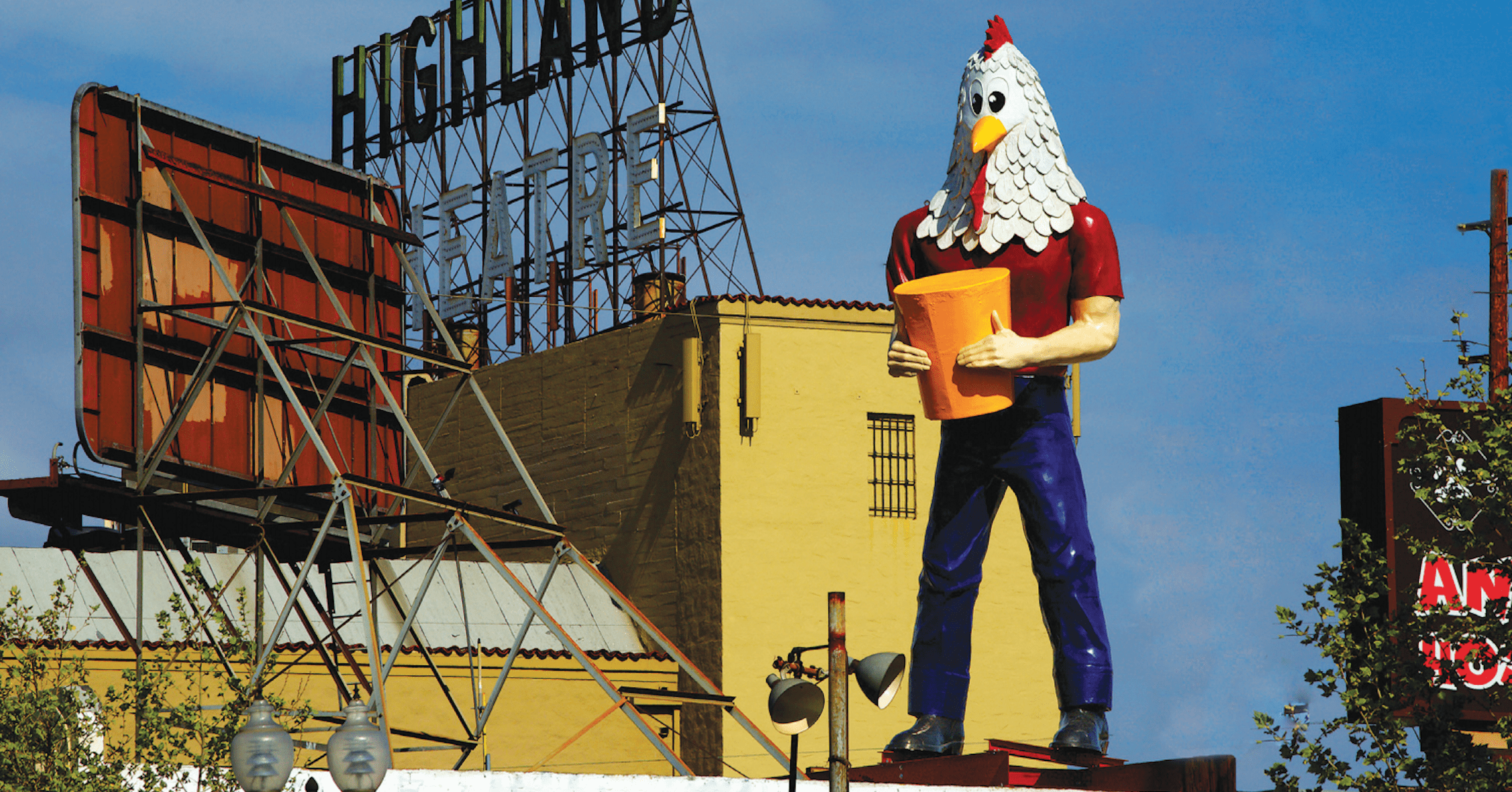 Perhaps the most peculiar of the Muffler Men to make a transformation from Paul Bunyan into something more unique was the LA Chicken Boy. Created in the late 1960s, the LA Chicken Boy was commissioned to sit atop a fried chicken restaurant of the same name, located atop a three-story building between Fourth and Fifth Streets. While the LA Chicken Boy’s body is unmistakably Paul Bunyan, his head is unmistakably poultry. That’s right, the body of a man, and the head of a chicken, this kooky statue has been a Los Angeles icon for decades. The 22-foot-tall fiberglass effigy has since then been dubbed “The Statue of Liberty of Los Angeles.”

The Chicken Boy took a 23-year break from his advertising duties when the fried chicken stand for which he was commissioned went out of business in 1984. A local artist, Amy Inouye, began calling local real estate agents to find out what the planned fate was for the LA Chicken Boy. Eventually, one called her back and told her to take the statue. Unsure of what to do with the giant, he was placed in storage. The LA Chicken Boy was not seen from 1984 to 2007.

After a long bureaucratic battle with permitting, the gentle giant was finally put out again in October 2007. Inouye and Stewart Rappaport, another local artist, placed the LA Chicken Boy atop their art gallery. Future Studio Gallery is located on Figueroa Avenue, part of the historic Route 66, and not far from the LA Chicken Boy’s original home on Broadway. “I gained a certain kind of fame, and a particular kind of non-fortune,” Inouye notes. “And I am resigned to the fact that my obituary will read ‘Chicken Boy’s mom’ no matter what else I may manage to accomplish. Not that I’m complaining.”

The statue has amassed awards, including the 2010 Governor’s Historic Preservation Award from California Governor Arnold Schwarzenegger — who ironically devoured a whole chicken after each of his workouts during his early bodybuilding days. September 1st has even been christened National Chicken Boy Day. The LA Chicken Boy lives on and now future generations can also enjoy this wacky Los Angeles landmark.