As Route 66’s establishment in 1926 would come to pave the way for cars to carry passengers from the Midwest to the Pacific coast via asphalt, the air, without any highways, had been — for over twenty years — a prime and novel location for traveling, fighting and performing tricks via airplane. Yet, from amongst the growing number of aviators to populate the sky, one pilot stood out from amongst her peers. 1926 would see the tragic accidental death—caused by an unfastened seat-belt—of nationally celebrated pilot, Bessie Coleman. 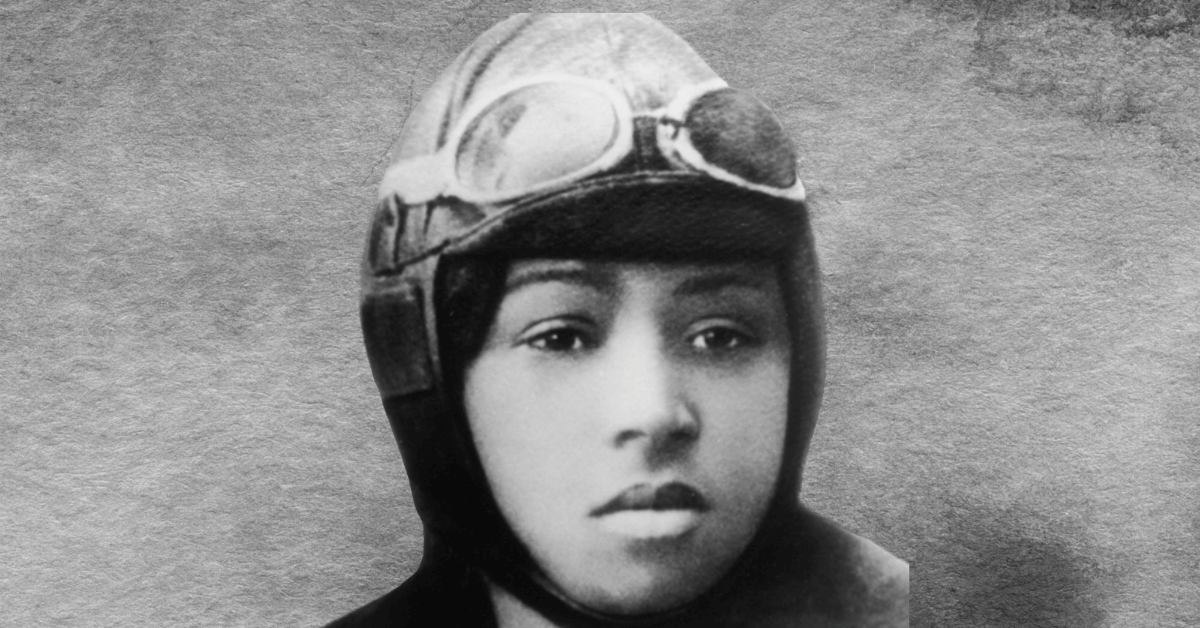 At 24-years-old, Bessie Coleman made the move from Oklahoma to Chicago in 1916, where she first developed a desire to fly after hearing stories told by homecoming fighter pilots. This desire would be met by a pair of difficult limitations or restrictions particular to the American politics and social values of the early Twentieth Century. Since the inception of the modern airplane, few American women—save for the wealthy—were in possession of the license necessary to fly such a craft. American flying schools refused to admit Bessie into their programs due simply to her race and womanhood. Yet, as a woman who believed that “the air is the only place free from prejudices,” these limitations proved unsuccessful in preventing Coleman from becoming the first woman of African-American and the first woman of Native American descent to obtain a flight education and ultimately, the cherished pilot’s license.

Like many painters and poets living outside of France, who sought to educate and enrich their genius within the “City of Lights”, Bessie, though not an artist, chose to earn her education and certification in Paris, where a woman of her ethnicity could do so. Aware of the growing culture of pilotry in France, where numerous women flew planes without restriction, she decided to learn French, and collected her entire financial savings to fund a trip to Paris, where she would attend flight school and earn her license. The only woman of color in her class, it took seven months for her to be thoroughly educated in aviation. In June of 1921, she was bestowed with an international pilot’s license by the Fédération Aéronautique Internationale after completing her education.

Upon Coleman’s return to the States that year, she was greeted warmly as a public celebrity. Air Service News noted her as a “full-fledged aviatrix, the first of her race.” An ovation made by hundreds of theatergoers—most of whom were white—greeted her at the premiere of “Shuffle Along,” an all-black musical. In 1922, she participated in her first air show in Garden City, Long Island, performing “heart thrilling stunts” for an audience of 3000, according to the Chicago Defender.

She performed audacious tricks for those curious spectators at airshows, earning her more celebrity. One such trick, recorded by Doris L. Rich in Queen Bess finds Bessie, after a frightened parachutist in her plane refused to take a leap, making the jump herself, and brilliantly landing in the middle of the audience. Such fearless audacity, it seems, would prove to be literally her downfall. “I thought it my duty to risk my life to learn aviation,” she once exclaimed.

The air shows and the celebrity achieved by them would not last for long as she took her final flight in preparation for an air show the following day in Jacksonville, Florida. While in the air, a wrench managed to wiggle its way into the engine’s control gears, causing the plane to flip and crash, the situation made doubly fatal by Bessie’s unfastened seat-belt—she was ripped from her seat by the air dropping to her death from some 2000 feet in the air (though the actual height is disputed).

As the Mother Road would become a tender daughter on November 1st of 1926, with the Federal Highway Act, the death of Bessie Coleman seven months earlier, together with the Air Commerce Act, demonstrated the importance of safety when controlling, not a car, but an airplane. Yet the fates of the two domains, air and road, have echoed each other since the arrival of modern aviation and have taught us that when driving or flying, the principle of safety must be maintained in balance with the principle of enjoyment, which is always inclined towards danger. Today, few immediately know the name of Bessie Coleman, but her achievements and courage must go down in history as pioneering and worthy of our respect.