Historic Route 66 is famous for its many eye-catching roadside attractions. Whether majestic or bizarre, these large structures have convinced millions of travelers to stop off the Mother Road and take a closer look. Whether it’s an 80-foot long concrete whale in a swimming hole, an art deco gas station lit up in neon, or the National Route 66 Museum itself, there’s never a dull moment when you’re travelling the Old Route. From Illinois to Oklahoma to Texas, and then out west to Arizona, these nine must-see roadside attractions are sure to help you get your kicks on Route 66. 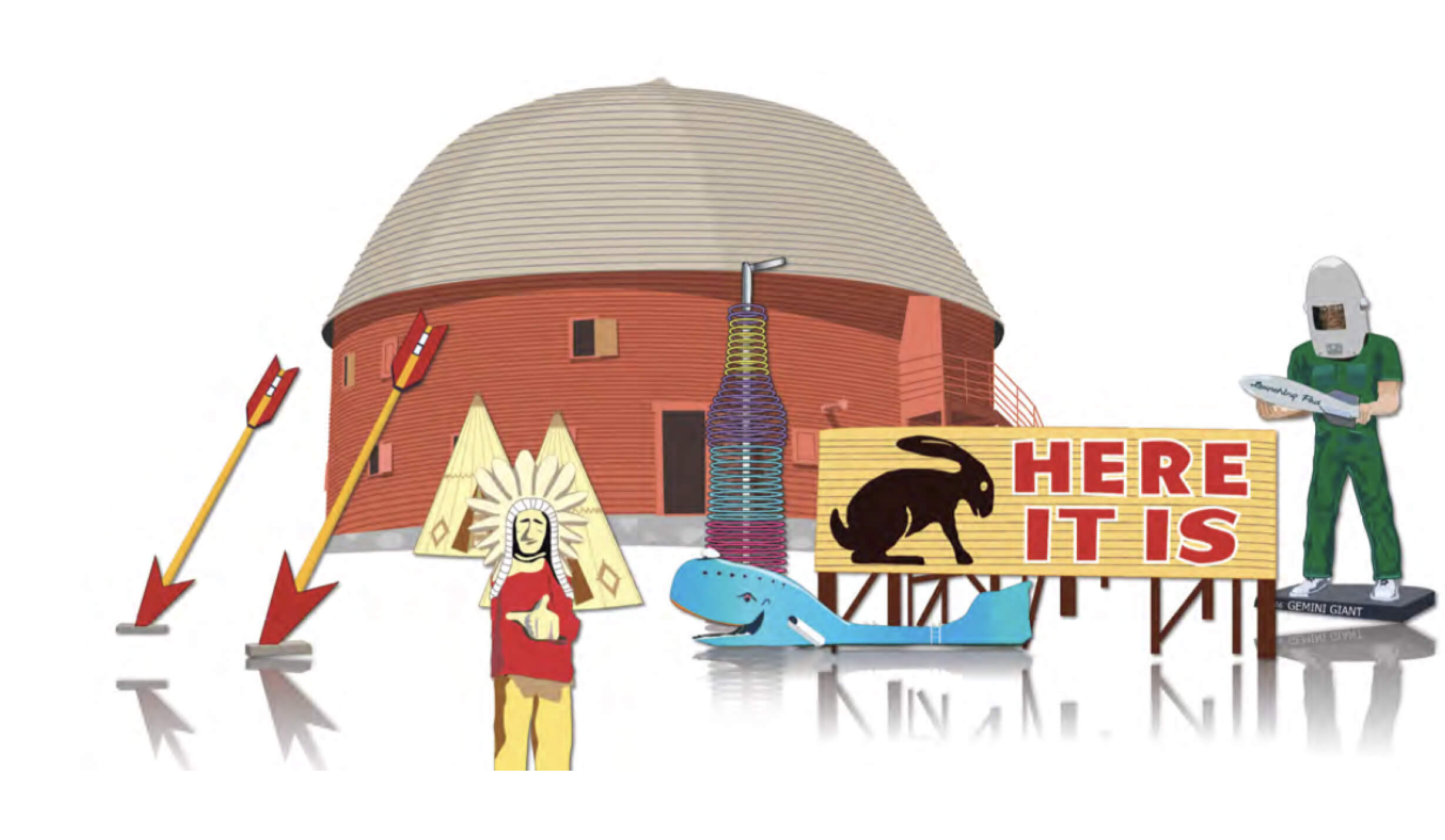 Standing 30-feet tall and named for the Gemini space program, the Giant directs travelers to the Launching Pad Drive-In in Wilmington, Illinois. It is perhaps the most famous “Muffler Man” along Route 66.

THE BLUE WHALE OF CATOOSA

Along the highway east of Catoosa, Oklahoma, an 80-foot long concrete whale floats in a shaded swimming hole. Equally bizarre and charming, it was built in the early 70s by Zoo director Hugh Davis as an anniversary present for his wife who was an avid collector of whale figurines. Read the true story of the Blue Whale of Catoosa

The Jack Rabbit Trading Post, a slight distance west of Joseph City, Arizona, has been in operation since the 1940s, surviving the rise and fall of the highway. This is partly due to their iconic “Here It Is” sign and giant fiberglass rabbit. At one time this was the culmination of a Route 66-wide advertising campaign. The trading post and sign have become essential route icons. Read the full true story of the Jack Rabbit Trading Post: “Here it is”

Created by artist Gregg Arnold in 2004 in Antares, Arizona, on the site of the abandoned Ranchero Motel. At 14-feet high and painted bright green, its whimsical eccentricity sticks out against the backdrop of the desert terrain and wide open skies.

This unusual art deco themed gas station in Shamrock, Texas, is dominated by two flared towers. In the same building is the “U-Drop Inn” cafe, a favorite stop for travelers since it was first built in 1936. Be sure to stop by in the evening to catch the building’s beautiful neon lighting as it bursts through the dark Texan night.

A relatively modern attraction first built in 2007, POPS in Arcadia, Oklahoma, with its sleek ultra-modern construction, echoes the spirit of the Mother Road’s classic gas stations. Every night the 66-foot tall neon pop bottle cycles through the colors of the more than 700 flavors of soda offered at the restaurant.

Built in 1898 by farmer William Harrison Odor, the unique shape of the barn was achieved by soaking and moulding the lumber while it was still green. The barn has two levels, the lower level was the corral, while the upper level was used for dances and social gatherings. It is listed on the U.S National Register of Historic Places.

Located in Elk City, Oklahoma, the National Route 66 Museum preserves artifacts from all 8 states traversed by the Mother Road. Through vignettes depicting famous people and places, visitors can experience every era of the highway’s history. Also, be sure to check out the Transportation Museum located in the same complex.