Driving along U.S. Highway 90, a small, unassuming building comes into view, sitting all alone in the picturesque desert of Valentine, Texas. The walls are white, the lights are on, and as you pull up to the front entrance, you are greeted with a display of designer handbags and shoes, the word “Prada” printed across the grey awning. Seeing a Prada store in the middle of nowhere may have you questioning your sanity, but after a quick search on your phone, you’ll realize that this is the famous Prada Marfa, an art sculpture that has a statement to make against the luxury goods industry, a statement that demands tourists to bask in its absurdity, knowing that it won’t make a single dime off of any of its visitors. 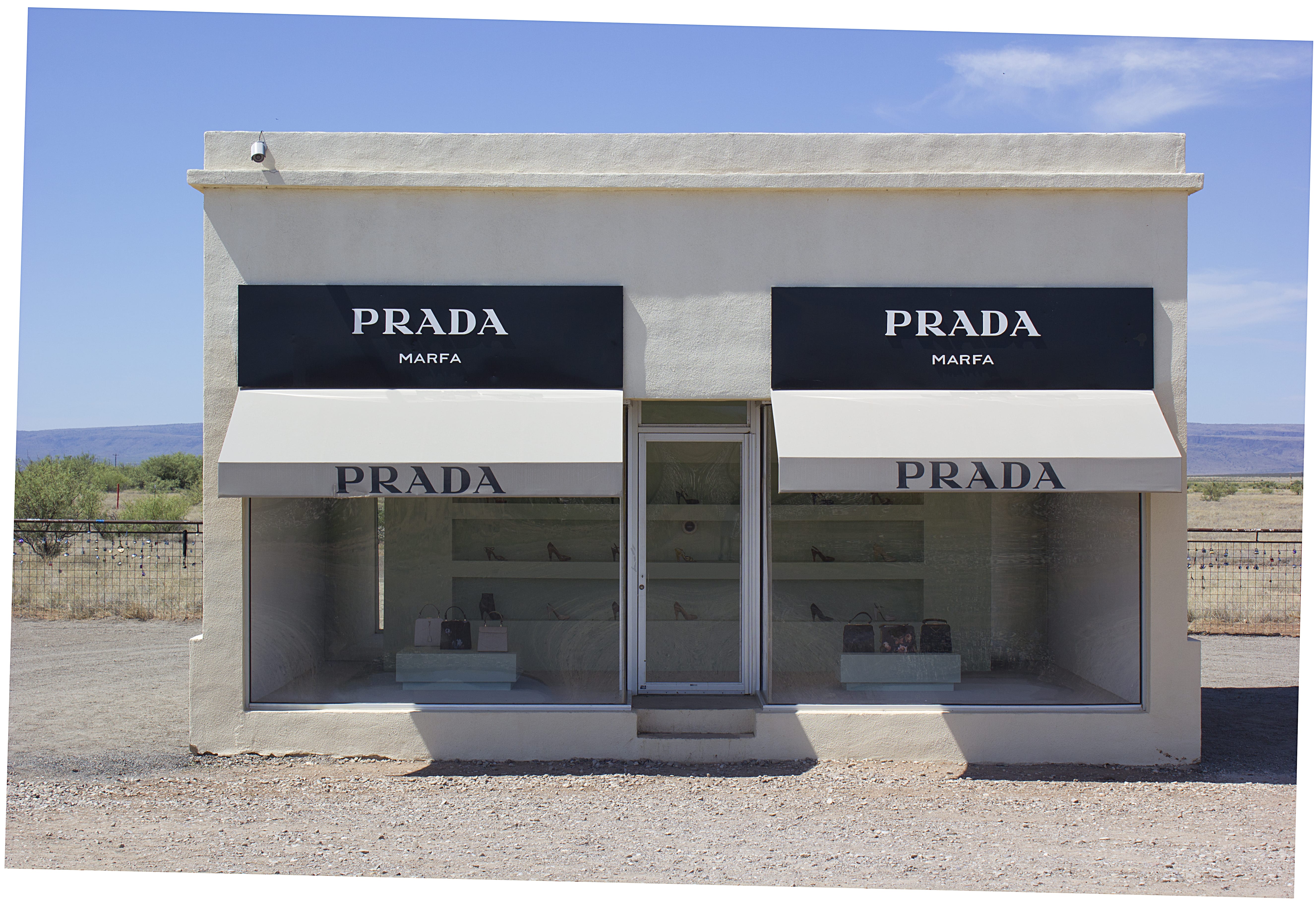 The artists responsible for the Prada Marfa are the Scandinavian art duo Elmgreen and Dragset, whose artwork blends both design and architecture, while also addressing social issues with a sense of humor. The pair first conceived of Prada Marfa in 2001, when they were displaced a mile away from SoHo to neighboring Chelsea, or from one artist oasis to the next, as SoHo’s galleries and contemporary art were being replaced with designer brand stores. In response, Elmgreen and Dragset decided to take a jab at these designer brands by placing a sign in one of the windows of the Tanya Bonakdar Gallery, which spoke of a new Prada store that would be making its way into Chelsea. The duo chose Prada in particular, due to how a new Prada epicenter was opening in the space where SoHo’s Guggenheim Museum used to be. It didn’t take long for the art scene to catch wind of Elmgreen and Dragset’s act of defiance, including the Art Production Fund (APF), a nonprofit arts organization in New York. They reached out to the artist duo and brought “their Prada store” to light, but instead of placing it in Chelsea, this Prada store found its home in Valentine, Texas, surrounded by Texas desert and not much else.

Valentine was the chosen destination due to its 35-mile proximity to the second nonprofit that supported the project, Ballroom Marfa, which is based in the quirky, historic art hub of Marfa, Texas. Both the APF and Ballroom Marfa worked together to make the unusual sculpture come to life, using interesting fundraising techniques: the APF sold Prada Marfa signs, each one customized to read the length in miles from the patron’s home to Marfa, Texas. “Whatever it took to make the project happen, we were involved,” noted Kathleen Lynch, Director of Operations at APF.

Prada Marfa was unveiled to the public on October 1, 2005, and contained merchandise that was handpicked by Miuccia Prada herself, who also gave them permission to use her famous logo. While this might raise some brows, Elmgreen and Dragset did not receive any compensation from Prada, with Miuccia Prada’s appreciation for contemporary art being the central reason for her cooperation on the project.

Today, the tourist scene of Prada Marfa is alive and well, with thousands of intentional and accidental visitors still stumbling across the sculpture on their drive down U.S. Highway 90. “You’re driving by and it almost appears out of nowhere,” said Kathleen Lynch, who took the three-hour drive from the El Paso airport to see Prada Marfa for herself. “For someone who is not expecting to see it, it’s really surprising.”

Marfa has appreciated the influx of attention and welcomes visitors to their sleepy town. “To this day, people have traveled to Marfa to get a snapshot in front of the storefront,” said Patrick Rivera, Assistant Director of Tourism in Marfa, Texas. “It will forever be recognized after Beyoncé Knowles took a vacation to this part of Texas and took the now famous Prada Marfa pose.” And plenty of tourists have followed in the pop singer’s footsteps, leaping in front of the sculpture to recreate her picture with gusto. It’s no wonder that Marfa has benefited from the press that celebrities and Instagramming tourists have brought to their area, and this trend doesn’t seem to be ending any time soon.

Elmgreen and Dragset had intended to let the Instagramable sculpture deteriorate over time, but this idea was scrapped shortly after Prada Marfa was revealed, as it was robbed of its expensive merchandise. As a result, APF and Ballroom Marfa have worked together to keep the sculpture preserved, replacing the windows with bullet-resistant polycarbonate glass, adding alarms to the merchandise, and installing security cameras on the property.

People still vandalize the sculpture every now and then, but the extremity of this vandalism reached its peak in 2014 when Prada Marfa received an involuntary makeover by the ‘artist’ 9271977, who covered it in TOMS stickers and blue paint, temporarily turning Prada Marfa into “TOMS Marfa” overnight. The sculpture was ultimately restored and since then, people have begun to place padlocks on the chain link fence that surrounds it, which may be representative of young love or a tourist’s attempt to make their mark on the art installation without painting the walls blue.

While its near-isolation makes it safer than most public art projects, Prada Marfa isn’t out of the wolf’s den just yet, making its preservation work all the more important in keeping it open to tourists and forever closed to buyers.