Innumerable and then Gone
THE GREAT AMERICAN BISON

Photo courtesy of the National Cowboy and Western Heritage Museum

Around the time that Christopher Columbus made his famous arrival in the West Indies, an estimated 30 to 60 million bison roamed the vast plains of North America. During this time, Plains Indians, including the Blackfoot, Cheyenne, and Sioux tribes, made use of temporary teepees as they followed bison herds during their seasonal migrations. For these Native Americans, bison were an important resource. While bison meat was used for food, bison skins were used for clothing and teepees, while their sinew or muscle was used to make bowstrings and moccasins. 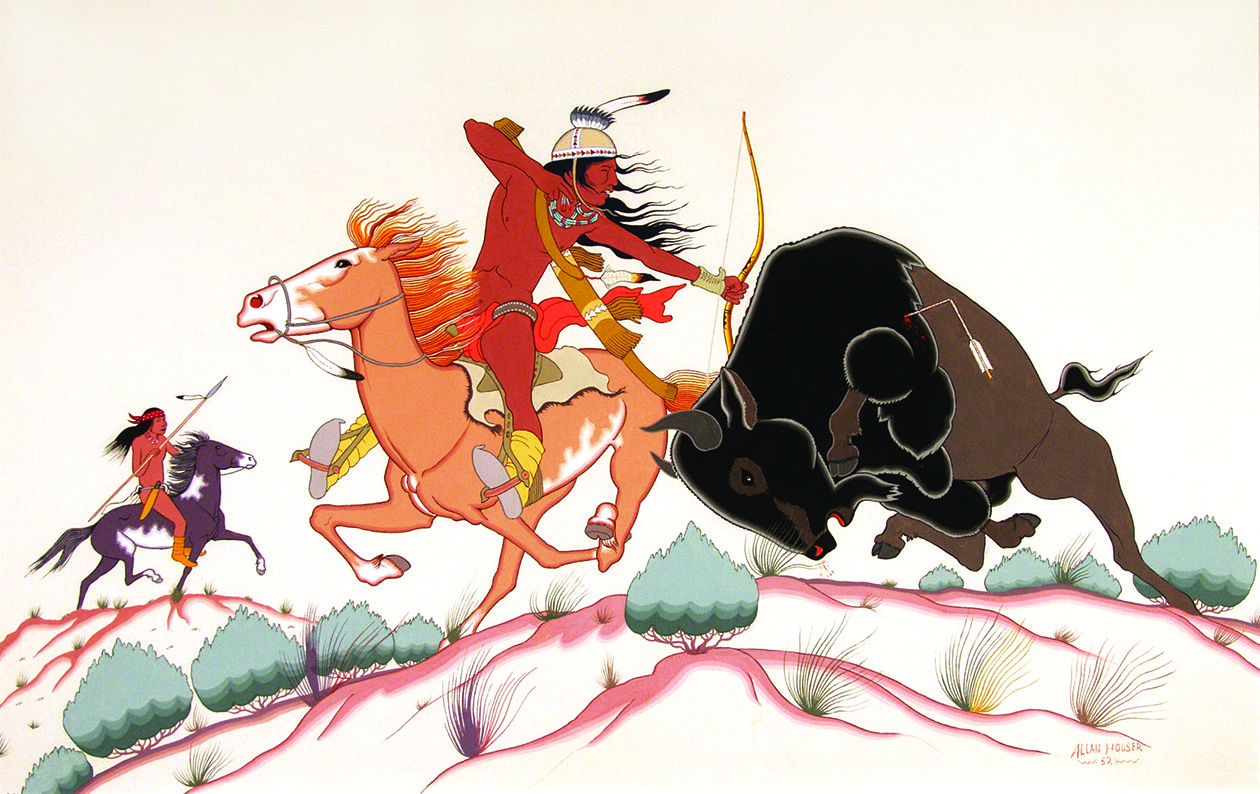 For several centuries after Europeans arrived in North America, bison continued to thrive in large numbers in wilderness stretching from northern Canada to northern Mexico and from western New York to eastern Washington. But by the nineteenth century, life drastically changed for North America’s largest land mammal.

As European settlers came into contact with native populations, trading partnerships emerged. In exchange for military assistance and animal pelts, Native Americans acquired ammunition, which gave them the newfound ability to kill bison in larger numbers. When the Spanish introduced horses to North America during the 1500s, Native Americans were granted a way to hunt more efficiently. Previously, natives were forced to rely on bows and arrows and uncanny precision in order to hunt bison. Wielding guns on horseback, Native Americans were able to kill bison easily and quickly, and the mammals’ population began to dwindle as a result.

During the 19th Century, settlers killed an estimated 50 million bison for food and recreation. That number is simply staggering. By 1889, unregulated shooting and widespread habitat loss shockingly decreased the bison population to a little over 1,000. The once great herds were decimated and their dominance on the Great Plains relegated to history.

In 2016, the bison was declared the national mammal of the U.S. But despite this proud title, these shaggy, odd looking beasts are currently classified as “near threatened” by the World Wildlife Fund (WWF). In order to prevent bison from reaching total extinction, the WWF is working with various Native American tribes to strategically manage bison numbers.

For those who have the chance to travel the western highways of America, including Route 66, a glance out the window could result in a rare glimpse of this American icon. In truth, bison embody the strength and resilience that defines the American spirit. These roaming giants survived the Ice Age, moving piles of snow and earth with their massive heads while keeping themselves warm under their dense coats. They’ve been saved from extinction once before during the 20th Century. With the help of preservation organizations and government intervention, bison can be saved from their demise again.

During their early seasonal migrations, herds of bison carved out trails through the untamed wilderness. Native Americans, early explorers and pioneers followed in their wake, using these trails for guidance. Without assistance from their animal neighbors, these people would have been lost in a maze of endless frontier land.

Bison undoubtedly played a pivotal role in American westward expansion. In failing to protect and save this incredible species, America will be neglecting an important aspect of its identity. Like the winds that whistle through the Great Plains, the demand for bison preservation comes across as a soft whisper. It’s up to Americans to make the decision to listen to nature’s pleas before it’s too late.