Route 66 and the Wildey Theatre

Amongst the many unique theatres that dot the diverse Mother Road landscape, there is one Illinois venue that continues to stand out today, reinventing itself as it goes. The Wildey Theatre in Edwardsville has been welcoming travelers off of Route 66 for more than a century, with the promise of a quality show and some exceptional popcorn. At a respectable age of 110-years-old, the theatre’s journey from 1 to 110 years has been filled with plenty of fun characters, colorful renovations, and even a temporary close that had left many wondering if the theatre’s lights would ever shine again. But they did. 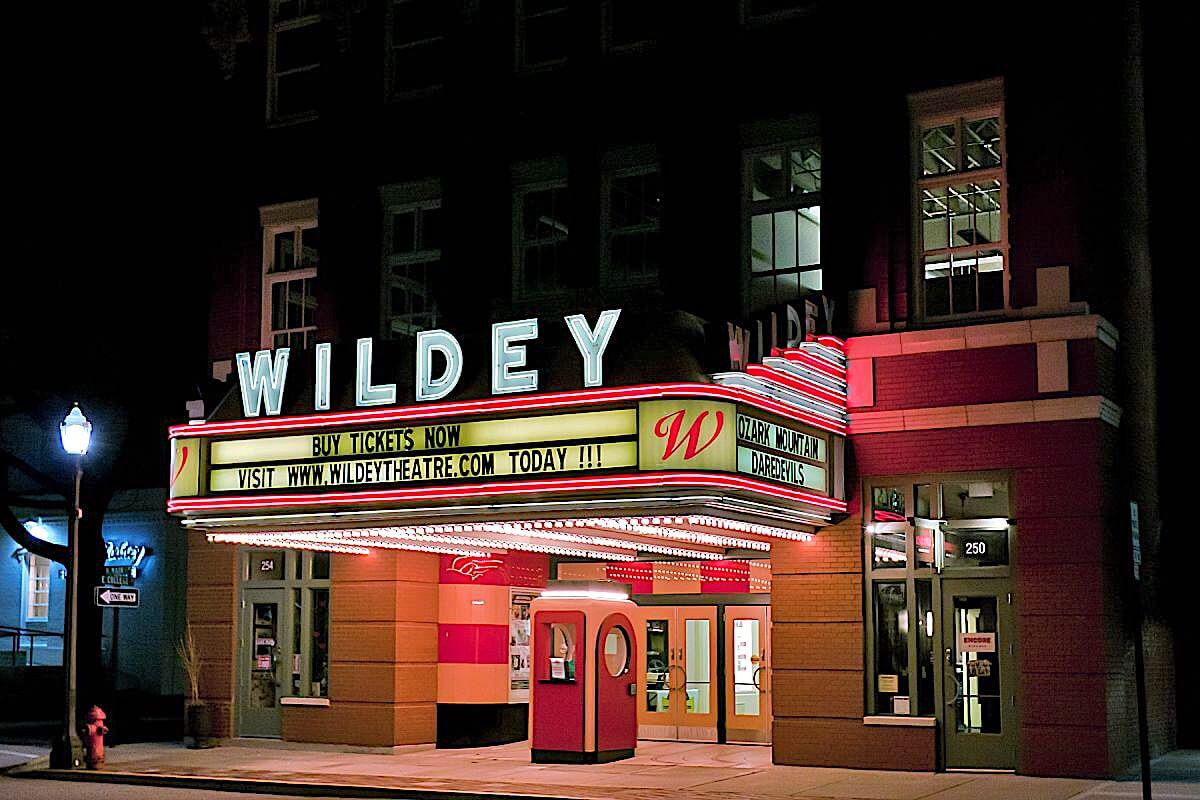 Created back in 1909, the theatre was built by the Independent Order of Odd Fellows, a national organization that helped create civic projects in the U.S. The Odd Fellows used the third floor of the Wildey as a meeting room while the first floor served as a 1,150-seat theatre, all done up in Victorian style. Back then, one could see vaudeville shows and musicals, along with more community-based events, such as school plays and band concerts.

Since its inception, the Wildey has been renovated extensively, with its initial look getting a facelift in 1937 to give it the more popular art deco style. Besides its physical appearance, the number of seats in the theatre also shrank. “It went down to 826 [seats] when it became a movie theatre [in 1937],” noted Al Canal, the general manager and talent buyer of the Wildey Theatre. Since then, the number of seats at the Wildey has continued to reduce to a cozy 325. “I joke that when they redo the theatre again, [there will] only be 25 seats in the place.”

Beyond the entertainment and atmosphere, perhaps the most memorable aspect of the Wildey is the colorful characters who were once connected to the venue, including Verna Duffy, who was the manager of the theatre in the 60’s and 70’s. “Verna was well known for being tough in the place. She always checked the balcony with a flashlight [and] you better not be trying to kiss your date because she would come back there and flash the light on you,” said Canal. “She didn’t put up with any nonsense in the place.”

Another former Wildey employee, Joan Evers, is a local Wildey historian with an impressive collection of Wildey artifacts. “She always had a deep love for the theatre,” said Canal. “I’ve been here with the theatre for 5 1⁄2 years. Joan told me the history of the theatre. She showed me her deep love and passion for the building, and it rubbed off on me.” Evers also shared her knowledge of the Wildey by giving tours of the theatre, and while she has retired from this job, she is still known to pop into the Wildey every once in a while.

Despite its vintage appeal, cozy ambiance, and charming personalities, the Wildey closed its doors as a full-time theatre in 1984 — their last movie seating over 400 people for a showing of The Big Chill. The theatre remained relatively untouched for more than a decade until the city of Edwardsville purchased it in 1999 and began renovations. But this was met with some local criticism. “There was some pushback,” noted Canal. “It was expensive, it was an expensive proposition for the city.” Despite the criticism, the Wildey was able to proudly reopen its doors to the public in 2011.

And that support has come back in leaps and bounds as the Wildey continues to attract visitors, whether they are from the area or travelers along Route 66. Local businesses also feel the love when the Wildey has a show going on. “When we have a show the restaurant on Main Street [tells] me that they are so much busier. The theatre has definitely brought in tourism,” noted Canal. “It’s a beacon for the community, it’s a beacon for the city.”

From blues and country music concerts to classic films on the Big Screen, the Wildey always has something going on to bring people through its doors, and its rich history of 110 years only heightens its appeal. The Wildey is yet another great reason to spend some time in the quaint Route 66 town of Edwardsville.